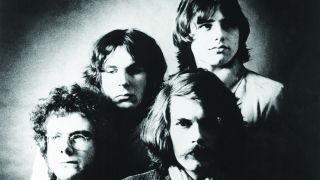 It’s October 1969, and King Crimson’s debut album In The Court Of The Crimson King (An Observation By King Crimson) has just been released, nine months after the band’s formation. Any discerning music fan browsing the ‘New In’ racks would have paused to decode Barry Godber’s disturbing gatefold sleeve art. The contorted face on the cover would epitomise the opening track: 21st Century Schizoid Man. A seven-minute cyclone of formidable psychedelic rock and free jazz, it positioned the group at the forefront of a fledgling scene termed ‘progressive rock’. What an entrance it was. You wanted extreme? With King Crimson you got it. “It was intense at the start, unbelievable,” recalls lyricist Pete Sinfield.

King Crimson came into being after the Pythonesque and artily high-functioning Bournemouth trio Giles, Giles & Fripp – bassist Peter Giles, drummer Michael Giles and guitarist Robert Fripp – found themselves getting nowhere, despite an album deal with the Deram label, and invited ex-Fairport Convention vocalist Judy Dyble and her multi-instrumentalist boyfriend Ian McDonald to demo exploratory recordings. Lyricist Sinfield then came into the circle via McDonald, with whom he had already written.

By the end of the year, Dyble and Peter Giles had gone their separate ways. Fripp then brought in college friend Greg Lake on bass and vocals, and in a basement under George’s Café in Fulham Palace Road, West London on January 13, 1969, King Crimson – named by Sinfield, riffing on aliases for Beelzebub – were formed.

Fripp tutored guitarist Lake on bass, but he needed no help with vocals. “He had a very strong voice in the mid to low register,” says Michael Giles. “Very unusual in a time of everyone screaming their heads off with high notes.”

As material gathered, McDonald’s uncle financed a van and tour equipment, and soon the band played their first live show, at Change Is in Newcastle, a club owned by comedian Bob Monkhouse. Sinfield hopped on board to push faders up and down for the light show on a night that could have ended in a riot.

“We got on stage,” Sinfield recalls, “and they announced: ‘Here’s Giles, Giles and Fripp, who for some reason have changed their name to King Crimson. They’re not a soul band but we hope you enjoy them.’ They thought they’d booked King Curtis. That was a close shave! It was a terrific experience for us, and we went back home and carried on rehearsing.”

“I took notes as people shouted out scrambled phrases,” says Sinfield. “The twiddly technical bits were mainly written by Fripp, but Ian took them on as well, the two of them playing flashy counterpoints at each other. When it came to a break, Greg said: ‘I can do ‘doom-doom-doom-doom’ on bass.’”

“Robert had already written these different sections,” says Giles. “I started having fun suggesting things to join them up, such as the accelerando into the six-four riff. For the second ending I borrowed from something I’d heard by Duke Ellington.”

Lyrically, Sinfield was getting a feel for what the band’s music seemed to express. “It fitted with nastiness of the human condition and war and stuff,” he says. “I wanted the words to sound violent and aggressive. ‘Cat’s foot, iron claw…’ – it’s the world tearing itself to pieces.”

The title itself was the last screw in the box. “I remember leaning against the mantelpiece and I suddenly got it. ‘Schizoid’, that’s a good word. Twentieth… no, we’ll take it into the future – 21st Century Schizoid Man. I was damned pleased with that. Then Greg’s big bass riff became even more important, like a clarion call.”

Relentless rehearsals coupled with explosive gigs at venues such as The Speakeasy – where Jimi Hendrix excitedly shook hands with Fripp and informed anyone within earshot of their greatness – earned Crimson a rep as one of the best live bands around, and Schizoid Man was their threatening tour de force. Within a few months they were in Wessex Studios in London recording their debut album, and on July 5, 1969, supported the Rolling Stones at their free concert in Hyde Park. Playing to a crowd estimated at 500,000, Crimson opened with Schizoid Man.

“I say the words now and I’m shaking,” says Sinfield. “I was doing the sound that day and very nervous. It had been played in clubs, and I’d seen it destroy other bands, who refused to go on after us.”

“We didn’t speak much about it among ourselves beforehand,” Giles says of the gig. “It didn’t matter if it was five-hundred thousand people or fifty people. We may have been a bit nervous and played things a bit too fast.”

The reception the band received from the massive crowd was wild. That afternoon, Crimson were kings.

Schizoid Man’s legacy in rock is incontestable. Fripp calls it “the first heavy metal song”. Ozzy Osbourne, Entombed and Voivod are among those who have recorded gnarly versions. “It’s a strong bit of work, from a time that was very creative, very free, no arguments,” says Michael Giles. “I’m amazed at how good it still sounds – and how edgy.”

Its biggest mainstream boost, however, came when rapper Kanye West sampled it for his 2010 track Power. “I’m sitting on a Kanye-funded bed!” Sinfield laughs. “There wasn’t another song like it – and there still isn’t – using those dynamics. I think it’s bloody fantastic, and the song still reflects the evil man does unto man because of his greed. It’s even more relevant today.”

The Write Stuff: the beginnings of Pete Sinfield’s lyrical prowess

After producing Roxy Music and writing lyrics for ELP, his first big hit came when he wrote Greg Lake’s 1975 hit I Believe In Father Christmas. In the 80s, Sinfield hit a new seam: pop. Success came with Bucks Fizz’s Land Of Make Believe and Five Star’s Rain Or Shine, and he hit a peak with Celine Dion’s über-ballad Think Twice. The single sold nearly a million-and-a-half copies in the UK alone, won an Ivor Novello award and paid for the house in Norfolk where he lives today.