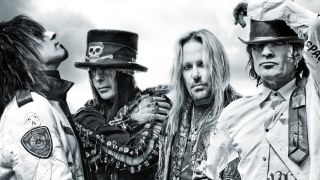 Nikki Sixx says Motley Crue will pursue "licensing opportunies" after their farewell tour – but he's assured fans that the resulting products won't make it embarrassing to be associated with the band.

They’ve previously confirmed that their final world trek could be followed by new music.

“That’s not what we’re looking to do. Our plan is to cease touring and then see what else is out there. One thing we’re going to do is explore different licensing opportunities.”

But he says the key to doing that is “to end things with dignity” – and he doesn’t want people saying: “‘Oh look, Motley Crue. They were cool once.’”

The bassist insists: “I want the fans to have more than that. I want them to have the pride they have in certain bands, and that I have in certain bands that left at the right time. It would be easy to slap our name on anything and everything that comes our way, but we’ve been very careful not to do that.”

He cites 2012 movie Rock Of Ages as an example of something they’d never do. “Their people came to us and we said, ‘This is a complete farce – it has nothing to do with rock.’ We said we didn’t want to be involved.

Crue are currently at work on the movie version of their biography The Dirt, with drummer Tommy Lee having reported that the leading actors are going to “come back a different animal” after touring with the band to help them get in character.