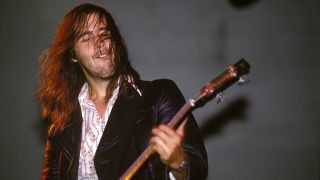 REFUSED TO TRADE ON HIS PAST

Following Nirvana’s break-up, it would have been easy for Krist Novoselic to assemble a new grunge band within the Seattle rock community. Instead, when he finally returned to making music, he did so with bands - first Sweet 75 and later Eyes Adrift – wholly uninterested in mining the past. Eyes Adrift, a trio formed with former Meat Puppets man Curt Kirkwood and Sublime drummer Bud Gaugh, really deserved a bigger audience.

FORMED A PUNK ROCK SUPERGROUP FOR ONE NIGHT ONLY

A one-off punk band formed as an anti-globalisation protest, the No WTO Combo featured Novoselic alongside ex-Dead Kennedy’s frontman Jello Biafra, Soundgarden guitarist Kim Thayil and Sweet 75 drummer Gina Mainwal. The quartet performed just one show – at the Showbox in Seattle on December 1, 1999 – but their performance was immortalised with the release of a live album Live from the Battle in Seattle on Biafra’s Alternative Tentacles label.

ROCKED A RECORD SHOP WITH FLIPPER

San Francisco’s Flipper were one of the loudest and most confrontational rock bands ever to draw breath, a huge influence upon the likes Black Flag, Mudhoney, Nirvana and Melvins: ‘They were just heavy. Heavier than you. Heavier than anything…’ Henry Rollins wrote in his Black Flag tour diary Get In The Van. The death, in 1987, of frontman Will Shatter following a drug overdose rather scuppered any opportunity they might have had to cash in during the early ‘90s grunge explosion, but when Krist Novoselic joined the band in 2006, Nirvana fans rushed to embrace their head-caving power.

Okay, this was Dave Grohl’s idea, but the concept of the Sound City Players – a revolving band of musicians saluting the music made in one of America’s most iconic recording studios – is too cool to ignore here. When Novoselic performed with the troupe at London’s Kentish Town Forum on February 19, 2013, it was the first time he and Grohl had shared a stage in the UK since Nirvana’s legendary Reading festival headline slot in 1992.

In truth, we can’t actually say yet how awesome Super-Earth are, because the band have only played one gig (at Portland’s Secret Society Ballroom), but the idea of a Nirvana/REM/Sleater-Kinney/Fastbacks/Minstry supergroup is pretty damn exciting to us. More news on this as we get it.