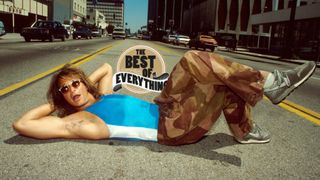 To walk away from the world’s hottest rock band at the very peak of their popularity takes a certain amount of chutzpah, but then David Lee Roth never did lack confidence. When the Indiana-born singer quit Van Halen – or was fired from the Pasadena band, depending on whose version of rock history you choose to believe – on April 1, 1985, ostensibly to focus upon directing his (ill-fated) Crazy From The Heat movie, the rock world went into mourning, but the louder-than-life Roth wouldn’t be absent for long… Here are his ten finest solo songs.

With nu-metal dominating the airwaves, no-one paid much attention at all when DLR released his fifth solo album DLR Band – featuring future Marilyn Manson guitarist John 5 and future Korn drummer Ray Luzier – in 1998: the fact the album came out on the singer’s own Wawazat!! Records label speaks volume about how the industry viewed Roth at the time. Truthfully, the world wasn’t missing out on a whole lot, but the opening track – a sneaky re-write of VH’s Hot For Teacher – is a zinger.

Roth knew what he was doing when he recruited crack musicians Steve Vai, Billy Sheehan and Greg Bissonette to back him post-Van Halen: this was a unit capable of going toe-to-toe with anyone in rock. The opening track of the group’s second album Skyscraper perfectly illustrates their confidence and verve, with the singer’s ‘Stop dreaming and start driving Stevie!’ exhortation to Vai ahead of the solo, this was classic DLR.

Offering a sonic relocation from California to the Bayou for five minutes, the second single from Roth’s third solo album A Little Ain’t Enough is a sleazy, bluesy, mid-pocket rocker that could have fitted perfectly on Aeromsith’s Permanent Vacation album. Roth’s harmonica playing is wonderful here, although he didn’t sound entirely believable delivering lyrics such as ‘I look good and I’m funny, so why am I lonesome honey?’

Famously, Van Halen declared that in their world, every night was a Saturday night. Damn Good, from Skyscraper, is the sound of the party winding down, a bluesy last-whiskey-of-the-night, you’re-my-besssssht-mate kind of song, with Steve Vai playing twelve string guitar and Roth delivering nostalgia-laden lyrics that wouldn’t have sounded out of place on a Springsteen album.

That title couldn’t be more David Lee Roth, a perfect encapsulation of his gleefully cheesy showbiz trouper persona, but really this highlight fromA Little Ain’t Enough is all about the dazzling, jaw-dropping freetboard skills of the brilliant Jason Becker. Check this out, then seek out the 2012 documentary Jason Becker: Not Dead Yet for a heart-melting, inspirational look at the guitarist’s life post-DLR.

David Lee Roth’s career might have already have been on the slide by the time he released his third solo album, but you’d never guess it from the album’s cocksure, strutting, ‘Everyone look at me!’ title track. The song is arguably most memorable for its eye-popping video, which features the presence of ‘blacked-up’ midgets and pneumatic ladies in what the Daily Mail would call ‘barely there’ attire. And people wonder why grunge happened…

As perfect a pop-rock song as Roth ever sang with VH, Just Like Paradise is one of those sun-streaked, convertible-top down, speeding-down-the-Pacific Highway songs which instantly transports the listener to California. When Roth sings ‘Girl we we’ve been meant for this since we were born’ he sounds like the cat that got all the cream.

Truthfully we could have compiled a Top 10 DLR Cover Songs list here, with the likes Just A Gigolo and That’s Life contributing massively to the singer’s popularity in the mid ‘80s, but that’d be cheating, so we’ve confined ourselves to selecting this one, the outrageously upbeat Beach Boys cover at the heart of Roth’s Crazy From The Heat. If ever there was a man born to sing this song…

The second single from Roth’s brilliant debut solo album, 1986’s Eat ‘Em And Smile, is the perfect distillation of the DLR ‘brand’, a song deliberately designed to make the listener feel like this is Roth’s world, and we’re lucky to live in it. Every time Roth sings ‘I wanna live it up, wanna quit my job, Tell the boss to go to hell!’ you can imagine thousands of blue collar American males punching the air in ‘Fuck yeah, Dave!’ solidarity.

Now this is how you make a comeback. The gloriously OTT first single from Eat ‘Em And Smile had the rock world believing, if only for four minutes, that leaving Van Halen was the smartest move DLR ever made. With lyrics such as ‘Are you ready for the new sensation?’ and ‘Well, guess who’s back in circulation?’ this is Roth in irresistible dick-swinging Megastar mode. Steve Vai’s ‘talking guitar’ might as well have shrieked ‘Fuck you Eddie!’