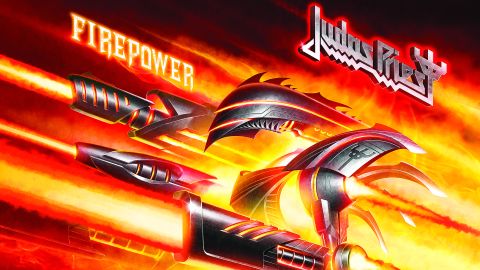 As the rockers of the 1960s and 70s enter their dotage, we spend our idle hours wondering how they might be coping with the stresses and strains of modern-day life. Now that Jimmy Page has become Led Zeppelin’s self-appointed archivist, we often imagine him down the local vegetable patch, metal detector in hand, searching for hidden treasures. (He got a whole allotment of love.) But truth can be stranger than fiction. It’s a fact that Rod Stewart enjoys nothing better than to play with his model trainset. That Eric Clapton banishes the blues by going fly-fishing. That Ronnie Wood loves to pore over his vintage stamp collection. And that former Judas Priest stalwart KK Downing has hung up his guitar and retired to play golf. (“Swinging or dodgy?” as Norman Vaughan might ask.)

But what of Priest themselves? No Earl Grey and Jaffa Cakes down the bowls club for these mighty meaty metal men. Come the year 2018, cometh the hour, and they’re still screaming for vengeance – at the top of their timeworn lungs. They’re still writing heavy-as-fuck new songs; still releasing heavy-as-fuck new albums. In the place of Downing these days is blond-haired lookalike Richie Faulkner, who has improved his act no end since leaving Lauren (daughter of Steve) Harris’s band. Each and every one of the songs on Priest’s latest full-length Firepower – and yes, we know Legs Diamond were there first – are three-way collaborations between fellow six-stringer Glenn Tipton, frontman Rob Halford and Faulkner himself. And hell, the latter doesn’t so much step up to the plate on this, the second album of Priest’s BOK (Beyond Our Ken) era, as trample it into tiny little pieces. All he needs is to don a floppy sombrero and all will be complete.

Now, in 1978 Talking Heads released a record called More Songs About Buildings And Food. In the case of Priest, what we have here are more songs about chaos, destruction, annihilation, violence, warmongering, brutality, intensity, insanity, the apocalypse, evil stalkers of the night, earthquakes, tsunamis, planet-splitting volcanic eruptions and – in the case of Lightning Strike – inclement weather. As the mighty Thor might quip to his bemused nemesis Loki: “Haven’t we had enough of this Ragnarok’n’roll?” Plainly, emphatically, Priest have not. Indeed, today’s young guns could and should learn a lot from Halford and his haggard chums. Wanton whippersnappers who favour a nonstop howitzer approach should realise that the best heavy metal has always been about light and shade, good and evil, advance and retreat. A caress of steel, if you will. Priest’s Brumbased cohorts Black Sabbath knew this all too well, assuaging their sonic assault with hazy songs such as Planet Caravan, along with wistful guitar interludes that might have been called Fluff but most certainly weren’t. Priest are also masters of this darkest of arts. Firepower is far from being a plethora of Painkiller rewrites – even if the title track comes close.

Perhaps the best moment occurs halfway through; track seven of fourteen. A soul-stirring instrumental titled Guardian – part Trans-Siberian Orchestra, part Brian May on top of Buck House – precedes standout track Rising From Ruins, which could be described as the more mature son of Priest’s age-old cheeseball anthem United. Full of measured drama and with a surprisingly sensitive vocal performance from Halford, the song’s message is resoundingly positive and uplifting: ‘We’re carrying on, rising from ruins, staying as one…’ Whether you’re the only metal kid on the block or a beleaguered soul emerging from the rubble in Syria, the thematics ring loud and true. Listen further and you’ll find plenty more gentle touches that serve to enhance the dynamics. Alternatively, if it’s all-out war you’re after, look no further than Necromancer, Flame Thrower and Spectre, aka The Ripper revisited. Played live, these songs will surely be even more ear-boggling than on vinyl, as was. You can just picture Halford lumbering about in his bulky leather coat and steel-toe-capped wellies, grimacing until his eyeballs bulge out on tentacles and his ears catch fire. And, of course, Priest being Priest, there are moments of unintentional hilarity. M’lud, I present to you the ejaculation ‘Immolate the bodies! No one will be saved!’ as irrefutable evidence.

The production – crisp, clean, ferocious – is nicely judged though. Take a bow, Priest veteran ‘Colonel’ Tom Allom and relative upstart Andy Sneap – the Batman and Robin of bludgeon. The argument there’s no point in heritage bands such as Priest continuing to write new songs and release new albums – when all anyone wants to hear are the greatest hits – continues to rage. And it’s true to say that Firepower, for all its merits, for all its better-than-it-has-any-right-to-bes, will never, ever be as fondly regarded as, say, past masterworks such as Sad Wings Of Destiny and Sin After Sin. But if nothing else the album proves that there’s life in this battle-scarred British bulldog yet. What’s more, this mangy old metal mutt is far from toothless; he ain’t gonna be put down anytime soon. As for KK Downing, he must be choking on his sand wedge.

Firepower is available to buy online.