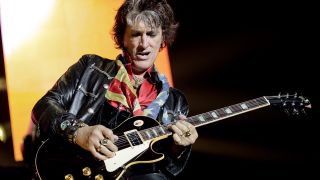 WHAT’S THE WEIRDEST FAN EXPERIENCE YOU’VE EVER HAD?

“We were playing a show somewhere and everyone was having a good time, some kid had a prosthetic leg and he’s waving it about it the air. We looked at each other like ‘Oh, OK.’ And then suddenly it comes flying up onstage. It’s one thing to throw shoes up onstage, but your leg? It was actually his way of getting backstage because he came looking for it after the show. So we came over and signed it. That was the weirdest fun thing that ever happened.”

WHAT’S THE MOST BIZARRE RUMOUR YOU’VE READ ABOUT YOURSELF?

“That Stevie Nicks was gonna have my kid, which was ridiculous as I hadn’t even met her at that point. It was so odd how the press ran with it as I was living with my wife and I didn’t even know this woman.”

HOW DID YOU FEEL WHEN YOU HEARD STEVEN TYLER WAS GOING TO BE A JUDGE ON AMERICAN IDOL?

“My original reaction was, ‘Why didn’t you come and tell us?’ We heard from the internet and rumours. So that was my first and overriding feeling.”

DID YOU UNDERSTAND WHY HE WANTED TO DO IT? WAS THERE ANY GENTLE RIBBING?

“Nah, we were pretty happy for him. We knew that it was custom-made for his personality. It was like he’d won the lottery, so we were happy. But we kinda wished that he’d told us so we could have made some plans. We didn’t know how much it was gonna impact on the band. We were just there twiddling our thumbs for a while. I think he thought we were going to try and talk him out of it but he was so off-base with that. We just wished he’d shown us a little more respect with the way it came out.”

WHEN DID YOU FIRST REALISE YOU WERE A ROCK STAR?

“The first time I came back to Boston and we sold out a 2,000-seat arena at a high school. Dream On was on the radio and the first record was out and all these kids knew the songs. Suddenly we thought, ‘Something’s going on here…’ and it was just a feeling that we got inside. Then everywhere we went it was like that.”

WHEN WAS THE LAST TIME YOU FELT COMPLETELY STARSTRUCK?

“I met Muhammad Ali at his 80th birthday. They asked me to play at his party at the MGM in Las Vegas and I got to meet him. I was overawed.”

HOW DO YOU FEEL ABOUT THE NICKNAME ‘THE TOXIC TWINS’?

“It works on a lot of different levels. It’s funny, the first time we were called that was after the band got back together and we were all sober. People think we’ve been called that since the 70s but it was actually an article from the 80s that first referred to us as that. We think it’s pretty funny. I don’t actually look at it as to mean drugs. I think it means more about our personalities, we’re like oil and water. You can put us together in a jar and shake us up but we never quite sit right. That’s what gives Aerosmith our energy. Mix us together and we explode.”

“I never liked pot. I’d always take it if it was being passed around, sure. I had to mix it with whatever else was in the room.”

HAVE YOU EVER HAD ANY SERIOUS ONSTAGE INJURIES?

“Yeah, I was playing a show back in the old days when we rarely ever played sober and I actually fell off the stage. It was pretty funny to people at the time but I ended up seriously hurting my knee. It gave me trouble for a long time, still to this day, in fact. That’s what happens when you play

shows and you aren’t in control of yourself.”

“I like clothes. I spend too much on good suits.”

COME ON! SUITS? THERE MUST BE SOMETHING MORE EXTRAVAGANT!

“I collect antique weapons as well. Not just old weapons: ancient ones. I guess I should have mentioned that. I bought an ancient Greek sword from the Bronze Age that was over 2,000 years old.”