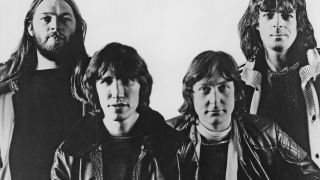 The long and frequently fractious history of Pink Floyd can be defined as an ongoing power struggle between Roger Waters and the rest of his bandmates – one with no clear victor. But it was Waters’ voice that dictated much of Floyd’s sound and all their lyrical content from the early 70s through to his acrimonious departure following 1983’s The Final Cut.

We could argue all day on the criteria for inclusion on a list of the 10 best Roger Waters Pink Floyd songs, so we’ve stuck to either a sole Waters songwriting credit or a co-write where he entirely dominates, so no Comfortably Numb, Another Brick In The Wall (Part II) or anything from Wish You Were Here. What we do have, however, is the definitive countdown of Waters’ greatest moments.

This early dose of fuzzed-up proto-metal shook the then-current folksy whimsy of the UK psych scene and dumped it on its Mandrax-stuffed head. An expansive, dirty and sprawling riff, unusually rudimentary in its composition, has David Gilmour stretching to the very limit of his vocal register, just about keeping up with the song’s spiralling key changes.

A companion piece to the same year’s Cirrus Minor, here Waters updates that song’s heavy-lidded English psychedelia with the pastoral, summer memories of an Arcadian childhood. The combination of background ambience, Waters’ trademark semi-spoken delivery and a stark acoustic guitar proved to be enduring tropes throughout his career.

This highlight from The Final Cut sees Waters assume full control musically and lyrically. The merits of monomania can be debated elsewhere, but the brazen sax solo, light-touch strings, plaintive keys and gentle, eloquent poetry hit like a hammer.

Famously rejected from The Wall, only to find a more suitable home in the film of the same name, Waters’ heart-breaking and furious examination of his father’s senseless death at the Battle of Anzio in WWII pinpoints the exact moment when the grandiose gave way to the introspective. A masterclass in slow-build dramatic tension, the addition of military brass supplies an extra layer of pathos.

The malevolent twin to its question-marked album opener on The Wall, if fascist rallies had a house band, this is what their intro would sound like. With a portentous riff and snarling hate-speech from Waters’ entirely credible in-character dictator, the band have never journeyed down darker paths before or since.

A loose and propulsive workout hanging over from Wish You Were Here, Sheep shares that album’s robotic keyboard motif and the bass-driven jam vibe of earlier material. The hooky pop guitar, however, only halfway masks Waters’ ire at those who George Orwell would have presumably named sheeple if he’d thought of it first.

Drummer Nick Mason’s favourite Pink Floyd song, Set The Controls… is also notable for being the only instance of Syd Barrett and David Gilmour appearing together on a recording. Though relatively bass-light, it’s Waters who’s clearly on the bridge: meandering dangerously far from the shores of conventional song structure and only making it halfway back.

Though having much more of a Gilmour stamp on it than others on this list, not least in the soaring solo, it’s Waters’ middle-eight vocal entry after it that centres the song then jumps ups the octave to add the bite. The essential Gilmour/Waters dynamic in a nutshell.

Fusing themes that straddled their entire career – mental fragmentation (especially Syd Barrett’s), memory and loss – the nursery-rhyme chiming of guitar and vocals echo the repetitive behaviours of the institutionalised. The seamless segue into the uplifting finale of Eclipse set the marker in how to close out a concept (or indeed any) album. It has never been bettered.

Another Gilmour vocal, but this is a Waters song right through to its cynical core. It’s probably the only song in history employing a 7⁄4 time signature to break the US market, and the album it was lifted from was so musically and conceptually cohesive, the fact it could be extracted at all – yet alone exalted into iconic status – is a testament to Waters’ myriad capabilities.