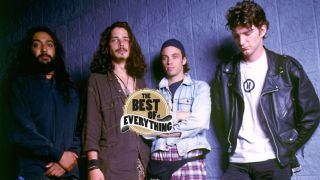 Forming in Seattle in 1984, Soundgarden became one of the first grunge bands to sign to a major label.

Although the band never really enjoyed the same level of success of their peers Nirvana and Pearl Jam, their 1991 album Badmotorfinger and its 1994 follow-up Superunknown are bona fide classic albums.

While Leeds’ four-piece Brawler’s upbeat punk songs might be a world away from Sabbath-infused sludge of the Seattle quartet, frontman Harry Johns is something of a Soundgarden connoisseur. We asked him to pick his 10 favourite tracks – and nope, their biggest single Black Hole Sun doesn’t feature among his list…

LET ME DROWN (Superunknown, 1994)
Harry: “If you’re going to show someone their first Soundgarden riff, choose this. It’s pretty straight and surmises the whole feel of my favourite Soundgarden record. Bluesy, stoner riffs, machine gun drumming by Matt Cameron, soaring vocals from Chris Cornell, and that solo from easily one of my favourite guitarists ever, Kim Thayil. This is pure groove, not unlike some of the sludgy New Orleans stuff coming out at the time like Corrosion Of Conformity or Acid Bath. It’s the perfect ‘getting ready to go out’ song. Mine’s a whiskey.”

THE DAY I TRIED TO LIVE (Superunknown, 1994)
“Now we have to talk about Chris Cornell. He might sound to some like a schmaltzy corporate-clothing-commercial type, but in ‘92, Cornell was God. Stick this on and tell me he’s not up there with Aretha Franklin and Joe Cocker. The man can sing.”

RUSTY CAGE (Badmotorfinger, 1991)
“Go to any dive bar in the universe and this is is guaranteed to be on the jukebox – it’s arguably their (second) catchiest – and poppiest – song. It kind of sounds like Queens Of The Stone Age, you say? Funny, that – Matt Cameron was QOTSA’s first drummer, and has the honour of playing their first ever show.”

LOUD LOVE (Louder Than Love, 1989)
“You can’t really hear what Cornell is on about, and it’s not as focused or coherent as later singles, but it’s still a killer hook and worthy of your ears.”

BURDEN IN MY HAND (Down On The Upside, 1996)
“This has a lot in common with Chris Cornell’s solo records. It was slammed for being too ‘poppy’ because some hardcore fans couldn’t get their head around the use of acoustic instruments, and the band dared to put some of the riffs in 4⁄4. To me, this single is just a very simple pop song – you can hear the band mellowing out a little and I think it works.”

NEVER THE MACHINE FOREVER (Down On The Upside, 1996)
“One of the cooler things about this album is that among the mellower tracks, there’s this fucking dirty beast, written by guitarist Kim Thayil. It’s almost like he said, ‘I’m cool with this new direction, but I’m still listening to Black Sabbath, so give me one song, dudes!’ It’s a total ripper.”

OUTSHINED (Badmotorfinger, 1991)
“In my book, this is the best Soundgarden song, full stop. The riff! the chorus! The solo! The lyrics! Everyone is murdering their instruments and it’s immense. Outshined is a gloomy monolith of a song that sticks in your head and pulls you down into the swamp. If you put this song on and I don’t destroy something as soon as the chorus kicks in, I’ll give you £10.”

LIKE SUICIDE (Superunknown, 1994)
“This sounds like some sort of hippy psyche-pop, but it’s still ace. The last minute is still one of my favourite song outros ever.”

FLOWER (Ultramega OK, 1988)
“It’s time to go back to the early days and give their first record a spin. If you can see past the crappy production and the fact that Chris Cornell is so young that his voice hasn’t quite come into its own yet, it’s still a barnstormer. You can tell that Kim Thayil wrote it; if you listen to all these tracks, you’ll have realised not only is he completely bad-ass, but also incredibly musically inventive. If you’re not bothered about that and just want to bang your head, you could do worse than listen to this bit of early Soundgarden.”

4TH OF JULY (Superunknown, 1994)
“A controversial one here, folks. This is a weird, mellow beast among Superunknown’s fast pace and high production values. It’s a haunting, sombre, lonely affair, and I always think of post-apocalyptic America when I listen to it. It doesn’t really fit in with the rest of the band’s catalogue, but it might be their masterpiece. If you still need a reason to think Kim Thayil is the best (and weirdest) guitarist ever, then I’m never going to convince you.”

For more info on Brawler, visit their official Facebook page.