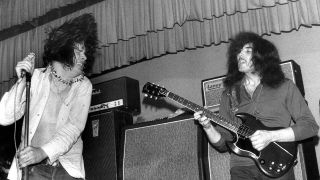 Richard Houghton's Black Sabbath – The Day I Was There tells the story of Birmingham's finest in the words of over 350 fans. It kicks off with despatches from the band's earliest shows as Mythology and Earth, and continues through the decades and through multiple line-up changes as the story of Black Sabbath's live shows is told from those down the front.

In the excerpt below, we travel back to July 1969, as schoolboy Philip Oswald books the pre-Sabbath band Earth to play at his school's end-of-year dance.

Black Sabbath – The Day I Was There is published on December 5, and is available to pre-order now.

I was a teenaged schoolboy from Carlisle Grammar School, and I started to get interested in local gigs, girls and all that stuff. Me and my best friend, Michael O’Toole, started going to dance halls, one of which was the Gretna Tavern in Carlisle, and we saw a band called Mythology.

Tony Iommi had the buckskin jacket with the fringes and the white Strat. Up there we didn’t have any speed guitarists, so to see Tony Iommi playing a Strat with the Marshalls he was using at the time, and Bill Ward on drums, with Neil Marshall and Chris somebody – I can’t remember his name - on vocals in Mythology was quite something.

They were the loudest we’d seen and it was obvious that these guys were on a different level. We were really into them. We started following them. They played some pretty rough places. These guys had fucking balls, man. They were proper guys, proper business rock‘n’roll. And a few years older than us, they seemed like gods to us.

Then word came round that Mythology were splitting up and I remember at the time thinking, ‘What are we going to do? We haven’t got a band like this any more.’ We’d only got the local pop bands. We had The VIPs, who became Art and then Spooky Tooth, who I know were quite influential on Sabbath.

I know that Black Sabbath saw Spooky Tooth in Carlisle. When you listen to Supernatural Fairy Tales [1967 album] by Art, it has got the magical thing with the flattened fifth in one of their songs, called Rome Take Away Three, but I think Sabbath actually took it from Holst’s Mars for the main Black Sabbath track.

Tony Iommi used to play flute on stage. I saw him do it. We’re talking about the Crown and Mitre in Carlisle. I can remember Bill Ward sitting in the bar on his own, with a pint of cider in front of him.

He used to fasten his Levi’s denim shirt right up to the top. He was a real gentleman. They were very nice people, very respectful. So Mythology split up. Pretty quickly we heard that they’d reformed and that Tony Iommi and Bill Ward had got these two other guys, Ozzy Osbourne and Geezer Butler, who we didn’t know anything about, and that they’d got this band called Earth.

So we thought, ‘Okay, great. Why don’t we try and hire them for our school dance at Carlisle Grammar School?’ because we were sixth formers there. We were rebellious types and the teachers used to organise the end of term dance and they’d have a trad jazz band.

But on our year we said, ‘No, we want to run it’, so we hired this band Earth. I think we hired them through [local promotor] Monica Linton. They turned up. We had a little school band and we opened for them, and they let us use their backline and PA, which was pretty good of them, thinking back now, these twatty little school kids with their little Vox guitars.

So we opened for Earth and they were great. Mythology did things like Morning Dew, So You Wanna Be A Rock ‘N’ Roll Star, the Sonny Boy Williamson number Help Me, Baby and Coming Up’ by The Young Rascals. They were doing those kind of covers. I don’t remember them doing original material.

And Earth were going much more towards blues. The blues scene in the UK then was in its infancy. It was a small world. The world of hot guitarists was small - Eric Clapton, Peter Green, Mick Taylor. Jimmy Page wasn’t that known then.

With Tony you could hear a bit of Clapton and a bit of Mick Taylor. But it was a fertile ground that they all tapped into. And obviously they were all coming from American guitarists – Buddy Guy, BB King, Howlin’ Wolf, Hubert Sumlin. And the Paul Butterfield Blues Band. So they played at the school dance and they were paid £40, which wasn’t a bad fee at the time.

On the night we were chatting to them and we said, "Can you do our next year dance? We’re going to do it for a charity. And next time we won’t be on the school site with masters hanging round."

I think one of the teachers actually switched them off at 11pm. "We have to stop now, boys. It’s eleven o’clock." He actually cut the power off to what was to become the mightiest band of all time.

I remember Ozzy Osbourne looning around backstage with this tailor’s dummy from the drama department, and dancing around with it on stage. He was always kind of out there, Ozzy. You didn’t get a lot of eye contact with him. He would stare at the sky and was a bit gone. Tony Iommi and Geezer Butler were much more grounded people.

Hell of a fucking band, though! 40 quid and you’ve got that line up in a little school hall. So we booked them for the school dance the following year.

Black Sabbath – The Day I Was There is published on December 5, and is available to pre-order now.