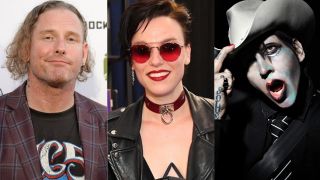 Corey Taylor details his new solo album
Slipknot and Stone Sour vocalist Corey Taylor revealed this week that his debut solo album will be titled CMFT – and it’ll be out later this year. And as if that wasn’t enough, Taylor released a star-studded video for the track CMFT Must Be Stopped alongside a lyric video for Black Eyes Blue.

New AC/DC album has been “delayed”
While AC/DC continue to celebrate the 40th anniversary of Back In Black, former Twisted Sister vocalist Dee Snider revealed that the highly anticipated new AC/DC album has apparently been delayed, but insisted that it’ll be a “miracle of technology.”

Robert Plant to release Digging Deep anthology
Robert Plant launched the third season of his Digging Deep podcast with the news that he would release a new compilation titled Digging Deep: Subterranea which will bring 30 of his solo tracks together – including three previously unreleased songs. The first, Charlie Patton Highway (Turn It Up - Part 1), was released on Friday.

Ihsahn vs Taylor Swift: Who has the best cover design?
Last week, Taylor Swift surprise released her new album Folklore. It drew the attention of Emperor’s Ihsahn who commented on the cover, which bears an uncanny similarity to his Telemark track Stridig. So which one is best?

Metallica’s Robert Trujillo unboxes S&M2… at the beach
Metallica’s S&M2 will be with us in just a few weeks – and to get us in the mood, bassist Robert Trujillo shared an unboxing video of the deluxe edition. But rather than do it from his home, the bassist took the box set to the beach before he went surfing.

New Ozzy documentary gets a new trailer
Biography: The Nine Lives Of Ozzy Osbourne will debut later this year – and this week, a brand new trailer for the documentary was released, focusing on Ozzy’s early days as a solo artist and what he was like at home between tours.

Marilyn Manson is back with a new album and single
Marilyn Manson has finally lifted the lid on his new album. It’s going to be titled We Are Chaos, with the vocalist revealing the news alongside a video for the title track.

Bon Jovi share lyric video for new single Do What You Can
Earlier this year, Jon Bon Jovi asked fans to work with him on a song – and this week the final version was released. Titled Do What You Can, it’ll appear on new Bon Jovi album Bon Jovi 2020 which will now launch in October.

Halestorm team up with Amy Lee for Break In
Halestorm have announced that they’ll release a six-track EP titled Halestorm Reimagined in August – and to mark the news, the band shared their new take on 2012 song Break In, which features guest vocals from Evanescence’s Amy Lee.

Corey Taylor teases solo track releases
While we’re all waiting to hear Slipknot and Stone Sour frontman Corey Taylor’s recently recorded solo material, he did reveal that rather than just launch one track ahead of its release, he was actually planning to unleash two songs.

Genesis reschedule The Last Domino? tour
Genesis were due to play across the UK and Ireland this winter, but they’ve just announced that the shows have now been moved into 2021. The good news? They’ve added two extra concerts.

Megadeth’s Dave Mustaine to release Rust In Peace book
Megadeth’s 1990 album Rust In Peace is widely regarded as one of their very best – and fans will be pleased to hear that Dave Mustaine will publish a book centred around its release and recording later this year titled Rust In Peace: The Inside Story Of The Megadeth Masterpiece. Get your pre-orders in!

Fish releases heartbreaking new video
Fish released a video for his new single Garden Of Remembrance this week – and it’s an emotional rollercoaster. The track will feature on the former Marillion vocalist’s final album Weltschmerz which will be released later this year.

AC/DC continue to celebrate Back In Black
AC/DC have continued to celebrate their Back In Black album this week, with an interview about Hells Bells, a clip from the vaults of them performing You Shook Me All Night Long back in 1981 and a look at how they created the title track.

Mastodon’s new album has “guitar gymnastics” and more
In the brand new issue of Metal Hammer magazine, we caught up with Mastodon drummer and vocalist Brann Dailor to discuss a range of  topics, including the band’s upcoming studio album.

And speaking of Jimmy Page…
Speaking with Zoe Ball on her BBC Breakfast Show, the guitarist admitted that it was “really unlikely” that Led Zeppelin could ever reunite again for a tour. Their last performance with Jason Bonham on drums was in 2007.

Dave Grohl stands up for America’s teachers
In the latest in his Dave’s True Stories series, Foo Fighters frontman Dave Grohl recorded an essay defending teachers in the US which addressed the controversy of opening schools across the country amid the coronavirus pandemic.

Metallica lift the lid on the S&M2 home release
We all knew it was coming, but on Wednesday, Metallica finally confirmed that their new S&M2 live album would be released in August. They marked the news with a brand new trailer along with videos for All Within My Hands and Nothing Else Matters from the orchestral shows.

Nightwish now have their very own crab species
Many rock, metal and prog artists have had fossils and rare species named after them – and Nightwish this week became the latest to be honoured. A newly-discovered Jurassic crab has been named Tanidromites nightwishorum after the Finnish prog metal outfit.

Great White apologise after playing show with no social distancing measures
Great White came under fire when it emerged that they played an outdoor show in North Dakota – but none of the fans took social distancing or mask wearing into consideration. The band later issued a statement to apologise but added: “We are not in a position to enforce the laws.”

Slipknot’s Corey Taylor has been filming a new video
Corey Taylor checked in back in May to report that he had finished recording his debut solo album, and the Slipknot and Stone Sour singer has now revealed he’s been filming a video for one of the tracks.

Four UK music venues are forced to close
The UK’s live music scene was dealt a blow this week when it was revealed that The Deaf Institute and Gorilla in Manchester, along with Hull’s The Welly and The Polar Bear were closing their doors for good due to the fallout from the coronavirus pandemic.

David Lee Roth: I don’t know if Eddie Van Halen will tour again
David Lee Roth once again touched upon Van Halen’s live future this week, when he reported that he didn’t think guitarist Eddie Van Halen would ever be able to “rally for the rigours of the road again.” Roth added: “He’s a band mate. We had a colleague down and he’s down now for enough time that I don’t know that he’s going to be coming back out on the road.”

Soundgarden drop benefit concert claims made against Vicky Cornell
The legal wrangle between Soundgarden and Vicky Cornell took another twist this week when it emerged the band had dropped claims they previously made about cash generated from the Chris Cornell tribute concert.

AC/DC are celebrating Back In Black’s 40th anniversary
AC/DC’s classic album Back In Black was released 40 years ago – and this week, the band announced they’d be celebrating the milestone in style. Not only have they asked fans to get involved, but AC/DC also released a video interview and a 1981 live promo for What Do You Do For Money Honey.

Sharon Osbourne says Ozzy is starting work on his new studio album
Ozzy Osbourne may have only recently released his new studio album Ordinary Man, but that hasn’t stopped The Prince Of Darkness from turning his attention to his next record. Ozzy’s wife and manager Sharon reported that Ozzy has once again hooked up with Andrew Watt for the new project.

Government announce £1.57 billion support package for entertainment sector
With music venues struggling to survive right across the country, the UK government this week announced a £1.57 billion emergency support package which will help venues, theatres, galleries, independent cinemas, museums, and heritage sites in the weeks and months to come.

The Osbournes are back with new paranormal TV show
It’s been a while since we got to see Ozzy, Sharon and Jack on our TV screens, but we’ll be seeing them again very soon when the new Travel Channel show titled The Osbourne’s Want To Believe airs later this year. It’ll be a journey through the supernatural… with a twist.

Legendary Oscar-winning soundtrack composer Ennio Morricone dies
The Italian Oscar-winning composer, who created more than 500 scores for film and television died this week at the age of 91. Morricone was the man behind soundtracks including Once Upon A Time In The West, The Good, The Bad And The Ugly and The Hateful Eight. His composition The Ecstasy Of Gold is used before every Metallica show, with the thrash giants later paying tribute to him.

Axl Rose: I’m nobody - just a citizen with my own opinions
After slamming US Surgeon General Jerome Adams last week, Guns N’ Roses frontman Axl Rose checked in to report that he’ll continue to speak out through a sense of “outrage, obligation and responsibility”.

Suzi Quatro announces new book Through My Words
After previously hinting at the project, this week Suzi Quatro revealed she’ll release a new book later this month titled Through My Words – a journey of her life and career through her lyrics. “I turned 70 on June 3, 2020, and my bucket list looms large,” Quatro said. “Doing a lyric book was always on that list, so here it is.”

Hundreds of musicians get together to cover Linkin Park’s In The End
Hundreds of musicians from 35 different countries filmed and recorded themselves singing and playing the Linkin Park classic In The End from lockdown – and the final result simply has to be seen. The clip came after the official video for the Hybrid Theory track passed the one billion views mark on YouTube.

Kasabian distance themselves from Tom Meighan
Earlier this week, Kasabian and Tom Meighan parted company due to “personal issues”. It later emerged that Meighan had appeared in court, where he pleaded guilty to assaulting his ex fiancée – and Kasabian responded saying that “Domestic violence and abuse of any kind is totally unacceptable.”

John Petrucci says working again with Mike Portnoy was "a lot of fun"
John Petrucci has spoken about how he and his former Dream Theater bandmate  Mike Portnoy reunited for the guitarist’s new solo album Terminal Velocity. “Yeah, having Mike play drums on this is cool,” he said. “It was a great experience.”