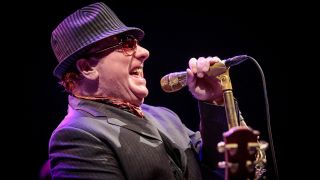 According to media lore, an interview with Van Morrison is not for the faint-hearted. The Belfast Cowboy has effortlessly slipped between music genres during his half-century career, from the early proto-punk of Them to the folk-jazz of 1968’s Astral Weeks and the country motifs of 2006’s Pay The Devil. But he has never quite escaped his reputation as a curmudgeon of few words, flaming any journalist brave or stupid enough to put a dictaphone in front of him.

Fortunately, today’s encounter finds the 71-year-old songwriter on talkative form, and eager to discuss his new album, Keep Me Singing, which touches on jazz, soul and blues, bound together by that still-mighty voice and a pervading sense of reflection. Given that, perhaps it would have been best not to kick off with the subject of his recent knighthood.

Ah, you can call me whatever.

How does it feel to be knighted?

You know what? I don’t want to talk about that. I’m here to promote the new album, so we should stick to that.

Keep Me Singing is your thirty-sixth studio album. That’s quite an achievement.

Yeah. But it feels like work, y’know? I don’t really think in those terms, cos there’s always something going on. I don’t have time to dwell on all that.

You still have that work ethic to constantly release new music. Is that something you learned in the early days playing army bases and clubs with The Monarchs?

Probably, yeah. Cos those shows in the clubs, you learnt that discipline of hard work and also having to keep it interesting too. When you were playing seven sets a night and, like, nine on the weekends, then you had to make it interesting. So I guess that was kind of a blueprint for later on.

How do you do seven sets a night?

Well, we were very young. Lots of energy. We were about seventeen. You have a lot more energy when you’re younger.

The title track of the album, Keep Me Singing, is about life before fame, isn’t it?

Yeah. When I meet people that knew me before, I feel like they’re relating to me in a different way than people who knew me after. I don’t know, but that’s just the way I feel about it. It feels different to me than people that knew me after I was famous. Especially recently, in the last twenty years or so, where I’ve actually become more famous. It’s even weirder now.

Do you miss the way you were treated before the fame?

Well, it’s not a matter of being treated, that’s just all I knew. I had no idea what [fame] was. I was just what you call a professional musician. There were people that did music part-time, and they played music on the weekend and then they went back to their job on Monday. I was doing that, but I wanted to do it full-time. That was the goal. No more agenda other than that. So I didn’t know what all that was about until later, until I became famous. And then I realised: this is totally screwed up that people would want to be this, to actually base their life on becoming famous.

In those days we didn’t have the internet, so you didn’t have all this choice. You couldn’t put your own CDs out, it was impossible, cos you didn’t have the money. So you had to go through a system. And that’s how the system worked. If you wanted to be a professional, then you had to do certain things. And a lot of those things you didn’t want to do, but it was a job. And we all have things in jobs that we don’t want to do. So you had to actually give yourself over to this system in order to just survive in it, and make any money. So by the time you got through all that it was too late to go back.

You’ve lived in the US, you’ve travelled the world, but Belfast is the place that seems to influence most of your songs. Is it part of your DNA?

Yeah, DNA, that’s right. It’s roots. It’s where I first discovered all this.

The city has changed a lot over the years.

Yeah. I mean, if you wanted to do music [in the 60s] you had to be in London. You couldn’t be here. In fact there was no music business here. It was all semi-professional or non-professional. So in order to actually be in it you had to go to London. You didn’t have a choice: either you do what we tell you to do, or you’re stuck here playing in a pub or something. So there wasn’t really any choice. Whereas now there’s loads of choices.

That has changed because of things like the internet. And now people are putting their own music out. They don’t need to have all this thing that we had. It was like being in the army. You had to do certain things, and if you didn’t you were going to be blacklisted.

With your songs, is it you in there or are you slipping into characters and roles?

No, no. It couldn’t be, because no song is real life. To me, this is something that’s been forgotten, and that’s why I like to mention it again. It was called ‘poetic licence’, but that term seems to have gone by the wayside. But anybody that writes songs, books or whatever, you have this thing called poetic licence, where you can add and subtract, and especially in songs.

And mix that up with a bit of imagination?

Of course. You just use life. Or sometimes you overhear a conversation. Years ago it used to be stuff in the newspapers, but now I don’t read news. I don’t read them any more, seriously. But you get it from books, newspapers, conversations, all kinds of places. So it’s never totally about the first person.

The song Going Down To Bangor on the new album is a real comedy moment, isn’t it?

Well it is, that’s right. In fact I just did an interview a couple of weeks ago and I said I thought it was bordering on tongue-in-cheek comedy. But I don’t know if the guy understood what I was saying.

Is that sense of humour widely overlooked with you?

Do you feel misunderstood?

I don’t feel misunderstood, I just feel like… [sighs] there’s a tendency for me to be stereotyped. And usually the stereotype stems from a long, long time ago, not present time. So that’s more what it is. I did an interview years ago, in the seventies, with this guy from Radio 2, I can’t remember his name. But it didn’t really go very well. And this guy held a grudge for years. For decades. Because the interview didn’t go the way he wanted. And every time he gets a chance, he sticks something negative in about me. Even now. So this is what they do. It’s called bearing a grudge [chuckles]. But anyway, this is why I’m not known for comedy, even though I’ve done it on and off. Well, on stage I do it. But it’s not promoted, because they want to promote some guy from the sixties or seventies all the time. Because that’s easy for them. They don’t have to put any work in. And they have the same three or four clichés that they write about some guy.

Did there ever come a time when you said: I’m not going to do this any more?

Not now. There was times over the years. I mean, I got out for several years. Nobody writes about that, because I wasn’t talking to anybody. Or they didn’t really care. None of these people that write about me even know, or they don’t even take it on board that I was actually out of the business for more than two years in the seventies. Cos I really wanted to get out. But then I had to come back, because my accountant called me up and said: “You don’t have any money left.” I said: “You’re kidding me.” He said: “No, you got no money left. You’re going to have to go out and do it all again.” So that’s what I had to do. To survive.

And your Plan B would have been to become a vet [Morrison’s early job ambition]?

No, no. I just wanted out because it was so – may I use the French? – f’d up. It’s not how anyone would want to live, believe me. It’s not how anyone would want to keep going. And when it got too difficult I just wanted out. But I had to come back for survival reasons. Cos I had people to support, including myself and others. So I had to go back to work. So then I had to keep it rolling again. So I got caught up in it again. But for several years I wasn’t caught up in it at all and nobody bothered me, I never heard from anybody. It was great.

But I don’t know if that could happen nowadays. Cos I’ve got so much stuff now. So much product that even if I stopped now – doing public appearances and all that – I’d still have to manage my catalogue. So I’d still be working, basically, I just wouldn’t be so much in the public eye.

So you’re trapped, in a sense?

Why has it taken you four years to come up with a new album of original songs? Is it because of what you said about reworking your catalogue?

No. In reality, this all takes a long time because originally there were three labels involved. So it actually took three years to get to the point of negotiating with one label, which was Sony, which was the best deal.

Would you say that record labels these days are more interested in releasing back catalogue than new stuff? Is that where the money is?

That’s a scary thought, isn’t it?

All the greats are in their seventies now.

The Top 30 British Blues Rock Albums Of All Time