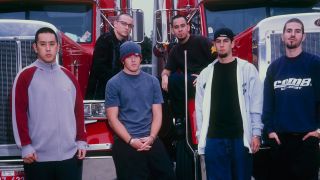 Linkin Park are one of the biggest bands in the world. Releasing seven studio albums and selling over 70 million copies worldwide, few bands can demand the size of audiences that the nu metal-turned alt rockers play to on the regs.

Everyone has their favourite era of Linkin Park, and lot of attention is usually paid to the the Hybrid Theory/Meteora double-whammy at the start of their career – they even played Hybrid Theory in full at Download festival in 2014.

But what are the best Linkin Park songs of all time?

To find out, we turned to science. By using a super-complicated spreadsheet pulling in data from Spotify, YouTube and Setlist.FM, we not only have the definitive list of songs fans are listening to around the world, but also the songs the band want to play.

We narrowed it down to 25, and it’s not as heavy on the older material as you might expect, with a lot of attention paid to the singles released post-2010.

So, without further ado, here are the best Linkin Park songs ever. No arguing, this is the list.

Released in August 2010, The Catalyst was the first single from Linkin Park’s fourth studio album A Thousand Suns and reached number 40 in the UK singles charts. The song sees the band experiment with a more electronic-led sound, incorporating techno influences and favouring synthesisers over guitars.

“The Catalyst lets the band dip its toe into electronica in its first half, with rave-ready blips surrounding Chester Bennington’s dystopian cries,” Billboard’s Jason Lipshutz wrote at the time. “The Catalyst recalls Muse’s epic vocal chants as well as Green Day’s political commentary, but Linkin Park creates an original, if a bit awkward, transition from twisty techno to fist-pumping rock.”

Speaking to Artist Direct about The Catalyst’s new musical direction, Linkin Park’s bassist Dave Farrell said: “I don’t like genres when it comes to our music. I don’t function really well in that mindset. Early on, we felt like we may have gotten placed in a genre that we didn’t feel comfortable in. It’s nice to be at a point where hopefully the music is just Linkin Park.”

The song has been used numerous times in the world of gaming, from the end credits of Medal Of Honor, part of the Linkin Park DLC for Guitar Hero: Warriors Of Rock, and in the band’s own iOS game Linkin Park Revenge.

The opening track to the Linkin Park’s 2012 album Living Things, it was the second single released from the band’s fifth album. Sonically, there’s a continuation of the electronica seen on previous album A Thousand Suns, but the dual vocal-play of Chester Bennington and Mike Shinoda harks back to the earlier days of the band, packing a signature open-armed chorus.

“Lost In The Echo started with mostly electronic sounds,” Mike Shinoda told Huffington Post. I think that was one of those moments that defined what this album was going to be about.

“When the guys heard it, I kind of said to them, ‘What do you think about that?’ and their responses, for the first time in a few years, were pretty good. They were like, ‘Yeah, we hear the merit. Let’s develop that idea. Let’s see what we want to do.’ I said to them, “You know, this is like a real moment for us, now, on this album.”

The video for Lost In The Echo also saw Linkin Park embrace new technology, syncing with the viewer’s Facebook account to incorporate personal photos into the video. A new non-Facebook video was released afterwards.

Runaway is one of Linkin Park’s oldest songs. Appearing on debut album Hybrid Theory in 2000, a demo of the song titled Stick N Move was included on the band’s 1996 sampler before Chester joined the band and were known as Xero. It features different lyrics, but the building blocks for Runaway are there.

Rolling Stone’s David Fricke noted the “tumbling funk” of drummer Rob Bourdon, adding that “Bennington and Shinoda shoot and share rhymes like they’re joined at the lip, their bodies rocking in spasms of conviction.”

Runaway is one of the few songs on Hybrid Theory that’s led almost completely by Chester with little rapping from Mike Shinoda. Instead, the bounce has been replaced by the teen angst that was typical of the nu metal movement of the early noughties, with lyrics constantly referring to running away and escaping a negative situation.

Musically it’s far far removed from the likes of Hybrid Theory and Meteora, abandoning any semblance of metal for a much more polished, poppier sound – the Guardian described the song as “a sleek Justin Bieber-style pop-R&B nugget” while Washington Post said it “sounds like the work of a ’90s boy band.”

All of the vocals are performed by Chester, and knowing the context of the song’s lyrics/release, it’s a powerful listen. With the release of the song coming the same day as Chester’s death, it was viewed over 10 million times on YouTube in the first 24 hours, with 102 million views at the time of writing.

The final single to be released from 2012 album Living Things, and another song that has been included in the Medal Of Honor videogame franchise – this time on Medal Of Honor: Warfighter. The video for the song includes a mix of gameplay footage, CGI, a band performance and real-life footage of the military in action in action. Speaking to Machinima about the video, Mike Shinoda said the song tells a soldier’s story.

In Billboard’s track-by-track review of Living Things, they say Castle Of Glass “uses compelling songwriting, extended metaphors and a simple but radical (for Linkin Park) arrangement to offer one of the album’s most intriguing tracks.”

Sonically, it continues the less-heavy and more electronic direction Linkin Park were moving into during this period. It stands as more of a ballad, with no rapping, purely clean vocals, with Chester Bennington’s singing sounding much more subdued and less expansive than previous.

The first proper song on 2003’s Meteora (ignoring the 13-second Foreword intro). Following the runaway success of Hybrid Theory and subsequent remix album Reanimation, Meteora continues in the nu metal vein but dials down some of the teenage angst in favour of electronic experimentation and showcasing the vocal abilities of Chester Bennington.

That said, Don’t Stay is a definite continuation from the Hybrid Theory school of songwriting. Letting Joe Hahn run riot all over this with his DJ and programming magic wand, it feels at times more adult than the likes of One Step Closer and Crawling, like a band comfortable in their skin and with the balls to divert away from their money-making blueprint.

“We didn’t really care about what anybody else was doing. We also didn’t care whether or not the songs fit together stylistically as a whole or a collection of songs,” Chester Bennington told Artist Direct. “We were testing. We were students in college. We were in the lab, and we happened to stumble across something everybody liked and it worked. I think Meteora was an extension of that.”

The first single from Linkin Park’s 2017 One More Light, it split fans of the band down the middle in terms of its newer, poppier direction. It features singer-songwriter on Kiiara on vocals, who is a long-time fan of the band.

“One of the reasons why we chose Heavy as the first single is because it is really the core sound of the album,” said Mike Shinoda following the release of the official music video.

“This wasn’t a scenario where the whole album sounds one way and the single sounds different. This is how the album sounds. So we wanted to go out with a song like that, where everybody can get a sense of the direction of this body of work,” he continued.

Heavy was the last Linkin Park song to be released during Chester Bennington’s lifetime.

The title track to Linkin Park’s 2017 album and at the time of writing, the final track the band have released. It’s the second single to be released following the death of Chester Bennington, and the band pay tribute to their friend and bandmate in the official video, produced by DJ/programmer Joe Hahn.

“It has been incredibly emotional to work on this, and especially to watch it. I feel that by doing it, we not only faced some of our biggest fears, but it enabled us to use our talents to bring some light to people who need it,” he said following the video’s release.

“I think about the people who connect with the band, outside and inside our circle. This video is a gesture of good will to the people who want that connection.”

In an interview with Kerrang!, Mike Shinoda said that the song was written about a friend of the band who had tragically died of cancer.

“We had a friend who worked for the record label for a long time and came up with us from years and years ago. She started out in radio promo and was basically driving us to the local radio stations in the U.S. Midwest, eventually getting promoted and promoted. At some point last year, I suddenly heard that she’d got cancer – and then all of a sudden she had died,” he said.

“We knew we absolutely had to write about what happened. It’s a sad song, but the pay-off is that when something dramatic and painful like that happens, the most important thing to do is to connect with the people you love and remind them you care about them.”

The first song from Hybrid Theory to appear on this list, but by no means the last. The band’s 2000 debut album has sold over 30 million copies worldwide, making it the best-selling rock album of the 21st century.

Writing in Metal Hammer’s Nu Metal special, Tomas Doyle described Linkin Park’s debut as “An absolute dreadnought of a record, to call Hybrid Theory a phenomenon would be to almost undersell it.”

Why? Because of its emo-tinged, angsty nu-metal anthems like With You. Slotted between rock club floor-filler One Step Closer and Points Of Authority, With You keeps the emotional momentum of Hybrid Theory turned up to 11.

Its bubbling, whirring and juttering electronics dance through the unmistakable distorted chug LP’s nu metal guitars. With You combines all the musical elements of Hybrid Theory into one package, then backs it all up with a classic Chester Bennington chorus –“Even if you’re not with me, I’m with you” – designed to be scrawled across school notebooks.

The fourth single to be taken from the gargantuan Hybrid Theory, and one that perhaps the most ‘nu’ of the nu metal. Opening on a flurry of rapping and scratching, you know Linkin Park are not your stereotypical metal band, and they’re not here to play by your games.

In Metal Hammer’s Nu Metal Special, Points Of Authority was named as the sixth best nu metal song of all time, with Stephen Hill writing “Nu metal’s biggest-selling band proved they had the balls to go with their platinum discs by smashing out this big-riffing banger. Their heaviest tune, without doubt.”

In an interview with Rolling Stone, drummer Rob Bourdon reveals how Mike Shinoda was the mastermind behind Points Of Authority’s guitars, rewriting and rearranging Brad Delson’s original riff so much that “Brad had to learn his own part from the computer.”

Despite being the fourth single from a squillion-selling album, Points Of Authority still made it to #9 in the UK singles charts.