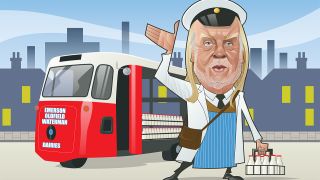 Over the course of my life, I have often been mistaken for other people in the music business. I always prefer to play along with it rather than own up. In fact, my enthusiasm for trains frequently gets me confused with another well-known hitmaker, Pete Waterman. I remember one particular guy who was quite persistent in trying to catch me out.

“Very much,” I replied. “In fact I learned to drive a steam engine at Minehead.”

The guy smiled, and as he walked away I heard him say to his wife, “It is Pete Waterman but he obviously wants to keep a low profile…”

Then there’s the wrong album syndrome. This happened after a recent concert.

“My wife and I love Tubular Bells,” said the fan.

“It’s this one… I re-titled it,” I said, picking up a copy of The Myths And Legends Of King Arthur.

“Brilliant, thanks” he said, still none the wiser.

Then there’s the “I know, you don’t I?” brigade. They usually follow up with a questioning, “Who are you?”

I usually reply, “I thought you knew me.”

On my recent Piano Portraits tour, one of our party overheard the following conversation between a husband and wife over breakfast.

You used to work with our milkman in Salford…

“It was, although I wished he’d sung one of his songs. He’s got such a wonderful gravelly voice.”

“Very true. I was hoping he’d play Fanfare For The Common Or Garden Man, but it was still really enjoyable.”

I don’t know who the hell they were thinking of, but to the best of my knowledge, Keith Emerson never sang Fanfare… either!

It’s not just the musos I get mistaken for. I think my favourite case of mistaken identity was a very persistent woman convinced I used to deliver her dairy products.

“You used to work with our milkman in Salford, didn’t you?” she asked. “Yes, I knew it was you when I saw you get off the train!”

“I’m afraid not,” I replied, “you’ve mistaken me for someone else.”

“You bloody well are!”

An argument then pursued which I lost. Apparently, I am now Rodney, a milkman’s assistant from Salford.

It was my dearly departed friend, Richard Whiteley of Countdown fame who told me that when he walked down the street, all he would hear was, “Look! It’s ’im off the telly!”

So much that he titled his memoirs, Himoff!

Maybe I should call my autobiography, Emerson Oldfield Waterman… His Music, His Trains And His Milk Round!

Rick Wakeman's Caped Crusade: The truth will set you free

Rick Wakeman's Caped Crusade: In a word (or several)