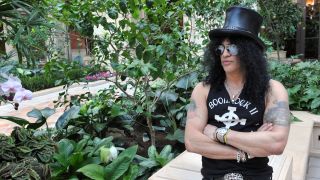 Born in Hampstead, London on July 23, 1965, Saul Hudson was brought up in Stoke-on-Trent until he was five. He then moved to Los Angeles and was later given the nickname ‘Slash’ by the actor Seymour Cassel as he was “always in a hurry”.

At school, Slash showed promised as a BMX rider before discovering an aptitude for the guitar. In 1985, he was invited to join a Los Angeles-based band by a singer called Axl and a guitarist named Izzy. Then things got really interesting…

“I definitely walked to the beat of my own drum throughout school. I went to a lot of different schools so I never really adapted – I never really fit in. My mom tried to keep me in school, but when the guitar appeared, it made her job that much more difficult because I stopped caring about fitting in with anything and just became that much more insular.”

“I went from a gypsy troubadour-type kid without anything, through touring with Guns and all those experiences just basically living on the road and never really living anywhere else. I was just sort of thrown into superstardom and not knowing how to handle that. Not having any domestic skills for living at home. Just not knowing which way to turn and not knowing whether I was happy or not.”

“I don’t have any genuine phobias, but I do have little quirky things like sensitivity about hands. Like if I’m watching a movie or actually there in person, if someone has a hand accident that really gives me the heebie-jeebies. I don’t like leaning my arm out of the window of my car when I driving like some people do. I’m very sensitive about fingers, hands and all that… digits!”

“The night I died was actually a bad ending to a wonderful evening. It was sort of funny. I had gotten into a massive argument with my fiancée and I thought, ‘Fuck it, I’m in Frisco,’ which is smack heaven, ‘I’m going to get loaded’. So I did but I used a little too much. It was fun for a while, then I passed out in the hotel hallway for eight minutes. They told me later that I died. I came round in the hospital and checked myself out because we had a show the next night. I overdosed the morning after one gig and then died – so I guess that counts as a day off – then got up and played the next night. I’m pretty durable like that, it didn’t phase me. I guess that puts Axl not getting up onstage into perspective.”

“I’m very insular, I don’t communicate my feelings about a lot of different things. I do when I’m playing, though. That’s the best way for me to get an emotional release. But I think in doing a solo record, a lot of times, like in Snakepit, which was my own little band, I sort of jammed within the confines of my comfort zone.”

“When Myles [Kennedy] and I first started working together I thought of him as some sort of a godsend. I thought he was just an extremely pleasant, unassuming individual, and a fucking from-on-high vocal talent. It’s very hard to find a frontman who is not only talented but fits right in, and is such a good guy, you know? So there was definitely a feeling of, after years and years of all kinds of chaotic stuff [with singers], I really began to think it was totally the norm.”

“I like to jam around - that’s something I’ll never stop doing. It really helps stop me from getting stuck in a rut as a player and just having what my band does and being resigned to only that. It allows me to play with people who do different things and discover new styles, shit that basically I normally wouldn’t do. It’s very humbling and you learn that you’re not the only fuckin’ guy in the room. You have to work with people that are better than you or bigger than you, and adapt to their situation.”

“Axl is one of the greatest singer-frontman guys to come along ever, and a brilliant lyricist. He’s a super-super intelligent, very astute individual. That’s one of the things I’ve always admired about him. And he’s one of the most straightforward honest people I’ve ever met.”

“A great rock song should take you somewhere. It should put you in a mood. One of my favourite sayings at one point was “It should make you want to either fuck or fight,” you know? Or something. It should have some emotional impact on you. And it should be played at high volume, and it should be, you know, rock’n’roll. It should be fun and bring out something in you that wasn’t on the surface before you listened to it.”