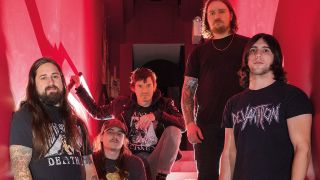 The world is going to hell right now. But as society fractures, the one cliché we’ve been told we can rely on is that impending doom and political uncertainty will result in great art. The climate in America is at its most conservative since the original thrash boom raged against Reagan. It’s been a while, but we live in hope that metal is ready to fight against the system once again.

“I was asked about whether metal could be political still,” Power Trip vocalist Riley Gale snorts. “And I think it’s bullshit to say that it couldn’t. It’s always been about going against the grain and pushing the boundaries – not just in music but also in the way we think. But I’m no political science major, I can only try and deconstruct what I think is wrong. I’m more interested in what my songs mean to you! I want to know how what I write affects people.”

Once Riley gets on a roll, he’s almost impossible to stop. Having been front and centre of one of the most explosive and vibrant thrash bands of the past decade, he’s got used to running his mouth at maximum pace. But he has a level of intelligence and intellect that is totally at odds with the lazy, meat-headed metal dude stereotype. In fact, the inspiration for Power Trip’s lyrical standpoint came while Riley was studying English at college around the time of their 2009 Armageddon Blues EP.

“I got into this ‘Intro To Rhetoric’ class with this professor called Dr Kyle Jensen,” explains Riley. “He was the shit, so intelligent, and I just wanted to take every class I could with him. And I was already thinking about the future, accepting the fact that we were going to see World War Three. I knew, even 10 years ago, that we were going to see this huge global change that would redefine what being human is because of technology. I don’t feel comfortable in this environment. My professor really encouraged me to continue that thinking, to take these French post-modern philosophy classes and watch the news every day from many different sources. It really made me realise my place in the world. So every record is about, ‘Oh, the world is fucked!’ I wrote the new one before Trump was even elected! I mean, I didn’t need to change anything!”

Since forming in Texas in 2008, just for, as Riley puts it, “Something cool to do to pass the time”, Power Trip have mutated from a fun hobby to one of the most vital bands around. After releasing a couple of EPs and one excellent full-length album in 2013’s Manifest Decimation, they became hotly tipped in underground circles. But newcomers and existing fans alike have been blown away by latest album Nightmare Logic’s brand of brutal, warp-speed crossover – it takes everything that Power Trip have done up to this point and makes it hit harder, faster and more often. It’s like a trip through some of heavy music’s most glorious moments; everything from Testament to Agnostic Front to Sepultura to Obituary are represented. If you like your music heavy, harsh and abrasive, and feel that you have been underserved over the last few years, Power Trip have got your back.

“The problem with metal recently has been that it’s either too polished, like Avenged Sevenfold or Five Finger Death Punch, or bands have a gimmick or try to step out of the box just to be different,” says Riley. “The new thrash records are way too polished. I think part of our appeal is that people think we sound old as shit! We still try and have our own sound, but I guess we aren’t reinventing the wheel. It’s a mixture of something modern with an old-school approach.”

The ‘old-school approach’ means being able to cut it live, and, with Power Trip about to head over to our shores with Napalm Death and Brujeria, they’ll need to show their prowess.

“I always say that if you put us in front of anyone that likes heavy music, they are going to leave liking our band,” Riley confidently predicts. “We toured with Lamb Of God and Anthrax at the end of 2015. We were the opening band and no one knew who we were. So me and Chris [Ulsh], our drummer, would walk through the crowd just before we were due to come on. There would always be some country motherfucker like [adopts Southern drawl], ‘Let’s get these faggot opening bands out the way!’, and then after we’d play, he’d be at our merch stand telling us we were the greatest opening band he’d ever seen. I remember seeing videos of those early thrash and hardcore shows and they looked genuinely dangerous. We want it to be that wild again, no matter how big the venue, no matter where we are on the bill – we want to instigate people losing their minds.”

It all points to a bright future… for Power Trip at least. For society at large? Riley isn’t so sure.

“I’m constantly thinking about the future,” he says. “The song Executioner’s Tax is about people just plugging into technology, eating whatever they want and waiting to die. Just checking out of life and wanting a nice, warm, comfy death. And I’m like, ‘Nah! Fuck that!’ Let’s try and do something about the world if we don’t like it or if we’re really that unhappy. We aren’t meant to sit in some small apartment and wait for The Reaper to show up! I guess a lot of it is because I know I won’t reach old age, or I’ll end up an empty shell of myself. I guess once you accept that, it’s actually quite empowering.”

Despite this attitude, and the disdain Riley has for those currently holding control of the world, there is a message of hope and positivity within Power Trip’s music: they’re not giving up yet, and neither should we.

“We’re honoured to be sharing a stage with a band like Napalm Death,” he tells us. “I look at the way that Barney [Greenway, frontman] talks to people onstage. It’s not just the level of passion and belief he has, but the eloquence and the intelligence and the empathy for his fellow man. That’s inspiring to me. That’s where I aim to be. I’m not there yet, but I believe in the power of the human spirit. I think we can make it through, whatever hell we are about to go through.”