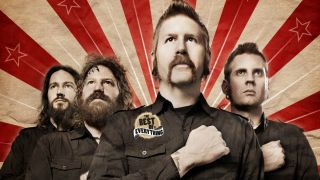 Since forming in 2000, Mastodon have released six studio albums and two live compilations.

The Atlanta quartet – whose line-up features guitarist Bill Kelliher, drummer Brann Dailor, bassist Troy Sanders, and guitarist Brent Hinds (all share vocal duties) – released their seismic debut album Remission in 2002. With each subsequent release, their genre-defying sound has mutated to include elements of prog, sludge and metal and has influenced a whole generation of new bands.

One of which are Brighton’s Black Peaks, who released their debut album Statues earlier this year. Here’s guitarist Joe Gosney with his ultimate Mastodon playlist…

Joe: “If you’ve only recently heard Mastodon, I think it’d be easy to dismiss their early material as they’ve evolved so much over their career. But of you go back to tracks like Crusher Destroyer, it really shows where this band have come from and what they’re capable of. This track, from Remission, is a smash-and-grab coming in at only two minutes long. In that time, I think they manage to make a huge ‘no fucks given’ statement and set a precedent of what was to come.”

“When Mastodon put out Leviathan, we went to London to catch them live for the first time. They opened up with this 14-minute track and it totally blew my mind. Every time I hear this song it reminds me of that show and I think it perfectly encapsulates everything that Mastodon is about. It’s brutal in all the right places, yet flows effortlessly from section to section.”

“I’ve listened to this song regularly for the last 10 years. I think it was this song and Leviathan in general that the band started to come out of their shell and began to show the world that they were doing something radically different. It’s easy to see why the world started to pay attention to Mastodon when this record was released. They’re one of the main reasons I play guitar and continue to be a huge inspiration.”

“This track was something of a rarity on Leviathan. On an album of frenzied time changes and rapidly moving sections, Megalodon had the most mighty riff which they weren’t scared to sit on for a good amount of time. It’s impossible not to headbang along to this song.”

“This behemoth of a song features none other than Josh Homme of Queens Of The Stone Age and has one of the most amazing guitar solos at the end of the song. What could be better than that?”

“This is the last track from their third album, Blood Mountain. Think Mastodon meets Pink Floyd and you’re half way there. This is a slow paced beauty of a song that has acoustic guitars layered all over it. Pendulous Skin has one of Brent Hinds’ finest solos and it’s one of those songs that would be perfect to wake up to or listen to right before you fall asleep. A masterpiece.”

“It took me a fair few listens to even begin to understand Crack The Skye. It was so different to their previous work and it’s one of the most stunning albums I’ve ever heard. Quintessence was the first track to really jump out. It has an amazing flow to it and it’s really dark and spacey sounding. I think this track in particular welcomed a new sound that Mastodon would continue with for the rest of this album.”

“This was one of the first songs from The Hunter album that I connected with. It’s a brutally heavy track. Simple as that. It has all the signature Mastodon moments you’d expect, plus it features Scott Kelly from Neurosis on vocals. Another perfect combination.”

“Taken from the band’s latest album, High Road shows another side to this beast of a band. It’s almost like they’re playing a more refined version of Iron Maiden’s sound and tops it off with a huge hook of a chorus.”

Black Peaks play Brighton’s Concorde 2 on December, then tour the UK in January.