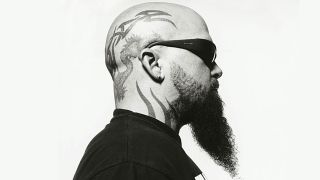 Kerry King doesn’t just play heavy metal, he lives it – the Slayer guitarist has spent 35 years creating some of the most vicious and groundbreaking thrash to burst out of the California scene of the 1980s. Here he takes us back to the early days of Slayer, explains why we’re all hypocrites and puts the boot in to “offensive” Limp Bizkit…

When and where we you born?

Is that where you spent your childhood?

Do you have any brothers or sisters?

I have two sisters, both older. I was the youngest and the only son, so I was pretty spoilt. It was a lot harder for me to get into trouble because I was the golden child. Me getting into the guitar at 13, that was because my dad was trying to get me out of the wrong circles and give me a hobby.

Were you a good student?

I was really good at school until I discovered girls, and then it was all over. It’s a good thing I didn’t plan on college or anything because I probably would have failed miserably. I was such a smart kid, but once high school came around and girls were in the picture, the grades went south. I remember in Junior High, I got the math award for the entire school, so marks weren’t a problem, but once you put the tits and the pussy in the equation, school went right out the door.

Did you have anything significant to rebel against when you were a teenager?

I didn’t really know what rebelling was. It’s funny, because I was doing math analysis in 12th grade, and the first semester I got an A and in the second semester I got an E. I was thinking, ‘Well, that’s enough of that!’

So having discovered sex, when did you discover rock’n’roll?

I’ve never done drugs in my entire life, but I’m quite an experienced drinker. But I didn’t even start until I was 21, not because that’s the legal age in America but because that was just my time, you know?

When I started to play guitar I got into heavy music, because I had older sisters so I knew what heavy music was. I found Judas Priest on the radio, various songs from the British Steel record, so I had to go and do my homework because the songs you heard on the radio were always Breaking The Law and Living After Midnight, and they’re not exactly the heaviest Priest songs. Before that I was really into Van Halen. I probably saw them six times on the first three albums, and that’s a pretty good place to start for a guitar player! It was a challenge to be like Eddie Van Halen back then, and it’s still a challenge now.

How did Slayer begin?

I was in a band with my guitar teacher, and he was in a band with Tom [Araya, Slayer frontman]. That band fell apart and Tom was available and he lived a block away from my parents’ house so I tried to put a new band together, and once I got a couple of guys together who would make it worthwhile, I got Tom and we started playing. Everything began from that point.

Slayer were there at the dawn of thrash. Were you aware that you were part of an important new movement?

Not really. We were just doing our own thing. We knew about Metallica. We obviously didn’t know about Anthrax at that point and Megadeth didn’t exist yet. I think we played with Metallica maybe once before they became a Bay Area band. But essentially it was just metal back then. ‘Thrash’ was a word that got used later on, long after we all came out.

Did your sound evolve organically, or was it something you deliberately cultivated?

I think we just did what we liked. We didn’t go out of our way to sound particularly different, except that it was us writing it, I guess. I was a big Venom fan, the first two records particularly, so I guess they had a big influence on me. We got to play with them on their first major tour of the States, and I was on cloud nine, you know? Seeing Cronos every night. That was a big deal to me. I remember seeing the Witching Hour video and I remember thinking, ‘These guys are the fucking shit!’ It was fucking awesome. I always wanted the darkest, most evil shit. It was all vinyl back then, so you’d go to the record store and you’d buy the album with either the flames or the devils or the skulls on it. You just threw the dice. I got a lot of great records that way. And some really shit ones, too.

What were the critics like in the early days of Slayer?

Oh, people hated us! Now we come to town and everybody wants to hear Evil Has No Boundaries and The Antichrist and all the songs from that time, but when we first came out, most people absolutely hated what we were doing. But hey, I liked it. It doesn’t matter what critics say. It never did.

Was there any one particular moment when you realised that being a member of Slayer would be your full-time career?

What, apart from the beginning? Ha ha ha! Probably when we did Haunting The Chapel and Hell Awaits. Even though we were still getting shitty reviews, people started coming to shows.

Reign In Blood was a watershed moment. Did you realise what a landmark album it was going to be when you were writing it?

It was just the next 10 songs. As simple as that sounds, it was just the next bunch of songs that we wrote. We just made up a load of fast riffs at that point. Dave [Lombardo, Slayer drummer] was always a big fan of punk rock, and I think that’s where a lot of the speed came from. The riffs came from the metal side of things. I guess a more appropriate description for what we do would be a metal-punk band, and I guess that’s what thrash is. In the early days, punks went to punk shows and metal kids went to metal shows, and I think we’re one of the bands, if not the band, that changed that.

The song Angel Of Death caused a lot of controversay. Was that something you embraced, or did it get in the way?

It gave me enough fuel to write music for the rest of my life. To see something like that have such an impact, and to see people take offence to it, it made me realise how hypocritical everyone is as people. We’re all hypocrites. We’re supposed to have freedom of speech, but you’re gonna get offended by us because we’re playing a song about that? That’s wrong. I think, on the whole, that mankind is full of fucking idiots. In a nutshell, our lyrics just say ‘think’. That’s it.

Did it surprise you that a band as heavy as Slayer ended up playing arenas?

I think that every time you go out on tour you strive to be better and by being better you get bigger places and bigger PAs. It’s a natural progression. You know, it’s cool to play clubs, but it’s also cool to play Download.

You survived the 1990s with more dignity than most. What was your secret?

I don’t know, man. It was the fuckin’ Limp Bizkit era. I remember that it was the only time that I let something influence what I was writing. When we made the Diabolus In Musica record [in 1998], I wasn’t into writing music because I was so offended by that shit. I couldn’t understand why anybody would make music like that, let alone like it. That was definitely my darkest time as a musician, and that definitely showed up on Diabolus… through my lack of involvement.

Why did people stick with you through that?

We never tried to be something we weren’t. Fans see that. I remember being into bands and when they made drastic changes I hated it, so being in a band and being able to make those choices, that was something I never wanted to do. We were still Slayer, it just wasn’t our best time back then.

When did you realise metal was coming back?

Believe it or not, I predicted it when Godsmack and Disturbed started to get big. Kids were getting into heavier music and they were gonna get tired of it and go to the next level, and then they’re gonna come right down our street. I said that years ago, and that’s essentially what happened. Slipknot were a definite new thing, too, and their first record was great.

It’s been more than 30 years since your first album. What’s the key to your longevity?

Getting a young start, for one. On the first couple of records we were all still living at home, so instead of hanging out with our fuckin’ families we’d be playing guitar, so we were much more productive. We weren’t touring a lot and we were still all about making our music. Now we have to fit the tours in and all kinds of other shit. I’ve never had a problem being in Slayer. I get recognised a lot more now. I’m hard to miss!