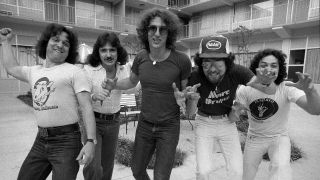 They saw themselves as the American Black Sabbath, made it cool to have a hit single all about death, and can probably trace their commercial decline in the UK to a broken mirror. Yep, it’s been a convoluted path for Blue Öyster Cult, easily one of the most fascinating and intelligent metal bands ever.

They may have started out as a psychedelically inspired heavy rock crew, but subsequently paid homage to pomp and AOR. In the process they’ve worked with mysterious guru/producer Sandy Pearlman and SF sage Michael Moorcock. Moreover, the lyrics from their most famous song, (Don’t Fear) The Reaper, were quoted in the Stephen King novel The Stand, while Metallica covered Astronomy, another BÖC classic.

The band started out in Long Island during the late 1960s, originally called Soft White Underbelly (the name inspired by a Winston Churchill speech), before changing to the Stalk Forrest Group, and by 1970 finally becoming the Blue Öyster Cult. The name has several possible origins, the most exotic being that it came from Pearlman’s term for a secret, fictional collective of aliens who guide the Earth’s destiny.

Just before BÖC’s appearance at the Monsters Of Rock in 1981 the drumming Bouchard brother quit, leaving the rest of the band to scramble through a disjointed set at Donington with drum roadie Rick Downey filling in. Infamously, Bloom publicly jumped up and down on the commemorative plaque given to the band that day, and in many respects that metaphorically signalled a downturn in the band’s fortunes from which they’ve never recovered.

In the years since, BÖC have soldiered on in various guises, occasionally hinting at past glories but rarely threatening a return to those peaks of old. Yet such is the potency of their first decade or so together that they still remain a major influence on the metal scene; there’s little doubt that, at their best, Blue Öyster Cult were among the metal elite.

Well, it’s got (Don’t Fear) The Reaper on it, which is enough to put the record in the very highest class. But that track is just one of several outstanding moments on the band’s fourth studio album.

Refining their sound and sharpening lyrical bards, they also came up with This Ain’t The Summer Of Love, E.T.I. (Extra Terrestrial Intelligence) and Tattoo Vampire. There are also two songs co-written with punk poet Patti Smith: Debbie Denise and The Revenge Of Vera Gemini.

Many would regard this as the ultimate Blue Öyster Cult record, advancing boldly into the 80s with a collection of songs that has a sense of foreboding and SF loneliness (Veteran Of The Psychic Wars), ghoulish love (Burnin’ For You), strafing riffage (Heavy Metal: The Black And Silver) and B-movie histrionics (Joan Crawford).

The album balances weighty musical passages with lighter pop-rock touches. At times BÖC seem to be taking the piss out of themselves, and their reputation for being the Thinking Man’s Metal Band . For the most part, though, it’s a monumental inferno.View Deal

A return to heavy music for the band, after a few years dabbling on the edges of pop-rock. With Martin Birch producing, the band let fly with tracks like The Marshall Plan, Black Blade and Unknown Tongue.

The guitars marched again, and the whole record had the feel of BÖC getting back to their roots, ready to meet the challenge from a new, hungry generation of metal heroes.

Unfortunately, much of the ferment generated here was dissipated by a disastrous US tour with Black Sabbath, but the strength of purpose displayed throughout Cultosaurus Erectus proved Blue Öyster Cult still had the momentum to compete.View Deal

For the first time, Blue Öyster Cult ditched Sandy Pearlman as producer, and instead used Tom Werman, who had made his name with the likes of Cheap Trick and Ted Nugent. As a result, Mirrors was a smoother, more AOR record than anything BÖC had done previously.

Against all the odds, this more pop-oriented approach worked. In Thee and The Vigil were as good as almost anything the band had done before, while Doctor Music and You’re Not The One (I Was Looking For) sustained the quality.

At the time, however, BÖC fans were loathe to accept the album’s more radio-friendly style, and Mirrors sold poorly. It deserved a better fate.View Deal

The album that started it all. Cast in the mould of biker rock, and inspired by a combination of Sabbath, Steppenwolf and Canned Heat – plus a healthy dose of esoteric lyrical slants – their debut quickly established the band’s credentials.

Stacked with immediate classics, the standout tracks are Workshop Of The Telescopes, Cities On Flame With Rock & Roll and Stairway To The Stars.

There’s a real menace about the sound, with Pearlman’s production outflanking their garage pretensions with something more distant and ephemeral. Not only could these guys play up a storm, but they also possessed an indefatigable charisma.View Deal

The combination of speed-freak delusion and 1950s B-movie nostalgia lock horns here, cemented by the sound of a band really stretching into the heavier end of their considerably broad spectrum.

This is perhaps the most British-influenced of all BÖC’s albums: you can hear Hawkwind and the Pink Fairies vying for space, pushing out the riffs for Career Of Evil, Dominance And Submission, Astronomy and Flaming Telepaths.

Inevitably, there’s also the unmistakable whiff of S&M, a subconscious theme for so much of the band’s best work. And the dark humour seeps through.

The cover suggests mystery, and musically BÖC played that image up to the hilt. They even split the record: side one was dubbed The Black, with side two The Red. Some of the lyrics - the result of collaborations with people like Patti Smith (then dating guitarist/keyboardist Allen Lanier) - gave the songs an extra dimension.

It’s definitely the Black side that has the better songs, led by The Red And The Black and Hot Rails To Hell. Overall the band were on a roll.

Some see this album as a surprising bridge between the dense surges of the Velvet Underground and the party pizzazz of Kiss.View Deal

The last album produced by Sandy Pearlman before BÖC decided to explore other possibilities. And, indeed there are times when everything is a little too comfortable and cosy.

The problem with Spectres is that it followed Agents Of Fortune, and doesn’t have anything close to the magic of that album’s monster (Don’t Fear) The Reaper.

But the ludicrous Godzilla is grin-worthy, especially when drummer Albert Bouchard would don a silly ’Zilla mask on stage. And Goin’ Through The Motions, R.U. Ready 2 Rock and Golden Age Of Leather strut with pride.

In many ways it was the blueprint for Mirrors, with a slicker style than before.View Deal

The realisation of an idea that first reared its head 14 years before its release, Imaginos took almost six years to record, and as a result is bit patchy. It’s a concept album, said to have been originated by Albert Bouchard, with the storyline about a 19th-century malcontent who keeps getting involved with key moments in history, with negative results.

Astronomy turns up from Secret Treaties, although it was always intended for this project. I Am The One You Warned Me Of and Del Rio’s Song are musically strong, and Siege And Investiture Of Baron Von Frankenstein’s Castle At Wwisseria has a strong claim to being the silliest Blue Öyster Cult song title ever.View Deal