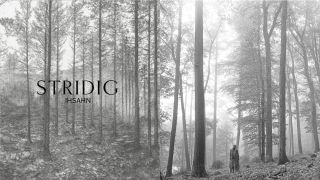 Taylor Swift surprise released her new album Folklore on Friday – and the eagle-eyed among you might well have noticed that the cover bears a striking resemblance to David Thiérrée’s design for Ihsahn’s Telemark EP single, Stridig.

Swift’s black and white cover features the vocalist standing in the middle of a misty forest – and it’s caught the eye of Ihsahn who says he likes the design.

Posting the Folklore cover beside the Stridig design, Ihsahn says: “So, anyone check out the new Taylor Swift album yet? Personally, I like the design!”

Designer Thiérrée adds: “Well, folks, I’m not the only one to think that Taylor Swift's new visual is very metal. Even very close to Ihsahn's artworks I made. I could have done it for her, probably for a cheaper price than what she paid.”

The similarities have drawn a mixed response from fans, with one saying: “Now let’s wait for Taylor to appear in public wearing an Emperor t-shirt.”

Earlier this month, Ihsahn released his new track Spectre At The Feast exclusively with Metal Hammer – the first material taken from his upcoming EP Pharos.

Ihsahn said: “Telemark was everything that was close to my heart: basic guitar riffing, screaming vocals. I thought, ‘I need to do a sequel where I do the exact opposite’ - things that I don't know how to do, explore sonic territory that I haven't explored.”

Pharos will launch on September 11 and will include covers of Portishead's Roads and A-Ha’s Manhattan Skyline. It's now available to pre-order.

So, anyone check out the new @taylorswift yet? Personally I like the design🤯😂 #Repost @davidthierree ・・・ Well, folks, I 'm not the only one to think that Taylor Swift' s new visual is very Metal... Even very close to Ihsahn 's artworks I made. I could have done it for her, probably for a cheaper price than what she paid 😁😅 #taylorswift #taylorswiftfolklore #folklore #blackmetalart #telemark #davidthierree #darkarts #metalcovers #artist #artwork #metalartist #owlstrollsanddeadkingsskulls #blackmetalmusic #blackmetalcovers Ihsahnofficial