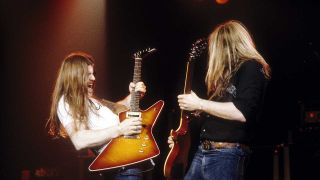 Named after a 17th century axe murderer who beheaded her lovers post-coitus, Molly Hatchet released their first album – with its famous Frank Frazetta artwork – in 1978.

Though never as famous as Lynyrd Skynyrd, the band nevertheless made an enormous contribution to Southern rock; 1979’s Flirtin’ With Disaster album sold three million copies.

However, like Blackfoot and .38 Special, the Hatchet lost their way during the 1980s, ramping up the keyboards in a failed bid to woo mainstream rock radio.

This single from The Deed Is Done – which saw a revised line-up fronted by Danny Joe Brown attempting to cross over into the mainstream, much like Blackfoot were doing at around the same time – isn’t universally popular with Hatchet devotees.

The diehards dislike it for its keyboards and the fact that it was bought in from the outside writers Thomas DeLuca and Tom Jans. It remains, however, a great song.

Four albums into their career and with Lynyrd Skynyrd still in a state of hiatus, Molly Hatchet had survived the seemingly fatal exit of frontman Brown to craft excellent, raucous Southern rock records.

Produced to immaculate standards by Tom Werman, the album Take No Prisoners and this, its second single, were prime examples of their strengths, but nobody knew that the merry-go-round of lead singers was revving up again.

Though not strictly a Molly Hatchet song in the truest sense, the Gregg Allman-penned tune from the Brothers’ 1969 debut was reworked as part of the band’s own self-titled introductory statement and has been a stage favourite ever since.

Originally called Dreams, the Allmans played the song slower, rawer and bluesier, Molly Hatchet favouring a more kick-ass approach. It remains in their live set to this day.

From the outside, the lyrics to this one seemed self-explanatory. Could there possibly be a Hatchet without the gruff delivery of Danny Joe Brown? Unthinkable!

And yet with album number three, the group’s Jimmy Farrar years began. An ode to triumph over adversity, Beatin’ The Odds made fools of the disbelievers.

What damned good would a Southern rock band be without its own love song to bourbon? Succinctly and crisply despatched, Hatchet’s came with a warning, however.

Narrated from the viewpoint of one who’s been there, done it and come out the other side (‘It takes whiskey to make you tall/You ain’t so very damn tall at all’) its meaning was there for those that cared to see it.

Eight minutes long in the studio but extended to heroic lengths onstage via a heavy-duty thrash-a-boogie climax, Fall Of The Peacemakers was Hatchet’s take on the murders of John Lennon and John F Kennedy.

'A voice from the past cried: "Give peace a chance"/He paid our price now, he’s free at last’, sings Brown before handing over to the three-guitar assault team. Glorious stuff.

The song that opened the band’s very first album and for many years signalled their arrival onstage, Bounty Hunter was as important to Hatchet as Skynyrd’s own signature tune Workin' For MCA.

Laying out the group’s wares in less than three minutes, it announced: Howdy, we are here. We are the shit. Grab y’self a glass and pay attention or get the fuck out.

In dissing rivals to praise their birthplace of Jacksonville, Florida you had to admire Hatchet’s balls. ‘Well, I've been to Alabama, people – ain’t a whole lot to see/Skynyrd says it’s a real sweet home, but it ain’t nothin’ to me’ announces Brown, before name-checking Dickey Betts of the Allmans, Charlie Daniels, Marshall Tucker Band and the Outlaws among others. Them’s fighting words around here, boy…

For reasons that only current band leader Bobby Ingram truly knows, Hatchet’s existing incarnation seems to have developed an aversion of performing their second greatest song.

It’s a crying shame as Boogie No More is pure Southern rock gold. For its first minute and 23 seconds the band toys with their listeners, before Brown’s immortal, provocative demand – “Come on here” – invites a ferocious boogie-rock instrumental meltdown.

A warning – ‘headbang to this song at your own risk’ – should accompany the title track of Hatchet’s second album, a road song echoing the enduring Southern rock premise that nobody really knows what’s around the corner.

It ripples with power from its monstrous opening riff to a final, all-out sustained triple-guitar cacophony and, frankly, if you’re not playing air guitar by the end then a doctor’s appointment is probably advisable.