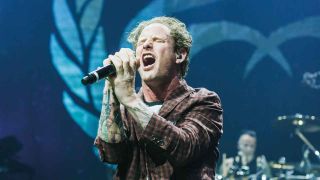 Is no surprise that Corey Taylor has brought up Johnny Cash, Alice In Chains and 70s glam rockers Slade as reference points for his much-anticipated debut solo album. The Slipknot singer is master of the unexpected cover version, as his work with Stone Sour and his own solo shows have proved.  But while he’s on familiar ground busting out versions of Slayer and Metallica songs, it’s his takes on everything from 70s country-rock classics to 80s hair metal bangers  that are way more interesting. We counted more than 100 Corey covers out there in internetland. Here are 20 of the best.

Originally from Alice In Chains’ chart-topping acoustic Jar Of Flies EP, this track is a mainstay of Taylor’s sets. He channels the darkness and majesty of the late Layne Staley with reverence, which is only right.

You Got Lucky (Tom Petty and the Heartbreakers)

Another of his most visited tunes, Taylor’s barebones take on the heartland rocker Tom Petty’s 1982 track from is extremely impactful. Recorded just a few weeks before Petty’s death in 2017, Taylor shared the performance on social media in tribute to the singer when his passing was announced.

Pink Floyd’s songs have been regularly covered by rock and metal artists but rarely well, Taylor’s acoustic rendition of the  standout track from 1979’s The Wall concept album is one of the few that beats the curse. He even shows his fretboard chops with his take on Dave Gilmour’s iconic solo.

With Or Without You (U2)

Say what you want about U2, but there’s no denying the intoxicating nature of so many of their songs. As Corey points out to the crowd in this clip, this anthem from The Joshua Tree has a habit of disarming even the toughest, cynical observer.

HIM served up metal’s most famous cover of crooner Chris Isaak’s 1989 hit, but Stone Sour’s version – recorded as a bonus track on their 2006 album Come What(Ever) May - runs it a close second, thanks to Corey’s stellar vocal performance.

Claiming he’s going to do his best not to butcher it, Taylor and his Junk Beer Kidnap Band actually do a first-rate take of David Bowie’s sci-fi glam rock classic. While the musicians are spot on, Taylor’s own impression of Bowie’s idiosyncratic vocals also passes the test.

It’s easy to overlook the fact that Corey has a pretty impressive vocal range, and he gives his pipes a workout worthy of Rob Halford himself on this cover of Judas Priest’s Screaming For Vengeance-era classic from 2017’s Strange 80s Benefit gig.

Featuring Frank Bello from Anthrax on bass, this clip sees Taylor ease through this chilled number from the enormo country rock legends. Ideal for his often-rambunctious crowd to kick back and sing along with glee.

Corey makes no secret of his love of 90s arena grunge. and Pennsylvania’s Live were kings of that. Lightning Crashes is a big, slowburning numer, though Taylor does undercut its drama a little by refering to it as “junk food shit.”

No, not the Dolly Parton one – this Jolene was recorded by one of Corey’s favourite singer-songwriters, Ray LaMontagne. Performed in a US Borders store, extra credit goes to Taylor who, instead of getting angry with an employee moving around while he’s singing, gives her a high five instead. Top lad.

Don't Care About You (Fear)

Corey has regularly talked up LA punk OGs Fear, and this bluesier version of their bolshy anti-social anthem works surprisingly well. Watch out for an appearance from Anthrax’s Scott Ian too.

One of the holy trinity of hit singles from Bon Jovi’s world-conquering Slippery When Wet album, and just one of the countless hair metal anthems that Corey has nailed live. He truly Jon Bon Jovis it up. even if his tongueis  ever so slightly in his cheek.

Corey’s 2016 solo concert at London’s Koko found him tackling one of Crawley goth legends The Cure’s biggest hits. Probably the only song that CT and Adele have both covered.

Heat Of The Moment (Asia)

It would have been inconceivable 20-odd years ago that the man who spat out (sic) Eyeless would end up performing such a stellar version of deeply uncool prog supergroup Asia’s ealry 80s hit Heat Of The Moment. Yet here we see Number 8 clearly enjoying poptastic note.

If you’re of a certain age and only know the Boyzone cover, do yourself a favour and check out the original from 70s singer-songwriter Cat Stevens before listening to Taylor’s subtler take on the classic. Though only done in soundcheck, the song is delivered with such veneration that it’s one of the most affecting performances on this list.

Have You Ever Seen the Rain? (Creedence Clearwater Revival)

Creedence Clearwater Revival’s 1971 choogle-rock staple was another song nailed by Taylor at London’s Koko. It’s also been covered by Bonnie Tyler, though we’re sad to report Corey has yet to do a homage to the Welsh singer’s hit Total Eclipse Of The Heart.

Having appeared on three songs on Steel Panther’s Feel The Steel debut, it’s only right that Corey was invited to join the band for a rendition of the dick-joke heavy ballad. Introduced as Poison singer Bret Michaels’ brother, the clip also features Corey giving his cameo part on Death To All But Metal a good seeing to.

I’ll Be Your Lover, Too (Van Morrison)

Credit for not taking the easy option and covering Brown Eyed Girl like everybody else, Taylor also gets marks for making this Van Morrison tune his own. Starting slowly before building to a powerful vocal, the dynamic range of Taylor underlines his status as one of our realm’s most gifted singers.

Despite appearing on a Steel Panther song with the lyric, “Fuck the Goo Goo Dolls, they can such my balls,” Taylor clearly appreciates the Buffalo rockers more than his buddies from the Sunset Strip. Both the singer and Stone Sour guitarist Christian Martucci can be seen revelling in the song’s melodic clout.

Ok, so this may not be the most critically appreciated song that Taylor has covered, but getting the crowd to join with this irrepressible kids’ shanty does show in his element. Fans of kids TV themes should note that he’s also covered Scooby Doo Where Are You? and the theme from the US Mickey Mouse Clubhouse show.