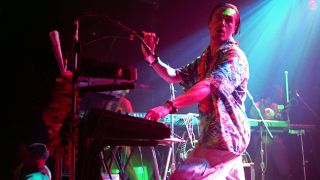 Mr Bungle have announced that they’re to reunite for three live shows in the US early next year.

It’ll mark the first time since 2000 that the trio of Mike Patton, Trevor Dunn and Trey Spruance have played live together, with Metal Sucks reporting that they’ll perform their 1986 demo The Raging Wrath Of The Easter Bunny in full at the concerts.

Guitarist Spruance tells Metal Sucks: “Ever since Trevor hatched The Raging Wrath Of The Easter Bunny v.2 idea a few years back, Patton, Lombardo, he and I had each been incubating some idea of that egg.

“Lombardo called me one day and asked me to make some guitar demos so he could learn the songs. He had this generous idea to surprise the other guys with being totally ready to go with the tunes.

“It just so happened that I was in Eureka, California, at the time. So, I found myself re-visiting all of those riffs in the same town and in the same house where I recorded all the original guitars on that demo 33 years earlier.

“There was something about actually physically working out the mania of those riffs again at Dave Lombardo’s request, in that environment – it just split my head open. It wasn’t long before the train of destiny had picked up too much speed for any of us to jump off.”

Patton adds: “I remember writing riffs for this cassette in my parents' garage, with no heat, so I recorded in a sleeping bag for analogue warmth, playing a one-stringed acoustic guitar that was piped into a ghetto blaster.

“Thank god I had Trevor and Trey to help decipher my rotten riffs into something intelligible!”

Ian says it’s “an honour and a privilege” to have the opportunity to play with Mr Bungle and adds: “When Mike hit me up about this, my brain thought he was asking me if I wanted to come to a show, him knowing I am a huge Bungle fan.

“When I realised he actually meant for me to play guitar with them it broke my brain.”