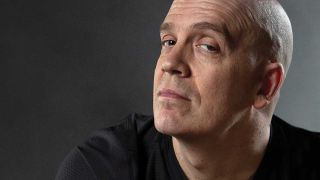 It’s not hard to see why virtuoso shredder Steve Vai plucked a 20-year-old Devin Townsend from obscurity and employed him as lead vocalist on his Sex & Religion album in 1993.

With a multi-octave range and enough personality to sink a ship, the young Canadian was plainly a prodigious talent. But even the benevolent Mr Vai could not have foreseen the extraordinary musical career that would unfold.

27 years later, Devin Townsend is firmly established as one of modern heavy music’s most unique and irrepressible talents. An eccentric but compelling artist from the start, Townsend kicked off his steady rise to glory with a dual approach, launching industrial-tinged metal crew Strapping Young Lad and his own solo efforts simultaneously.

In 1997, the release of SYL’s second album City and solo debut proper Ocean Machine: Biomech confirmed that the still-young muso was constructing his own sonic universe. That universe expanded beyond recognition over the decade that followed, with albums ranging from the epic, cerebral prog-scapes of Terria (2001) and the immaculate alt.rock bombast of Accelerated Evolution (2003) through to the claustrophobic intensity of Strapping Young Lad’s Alien (2005) and the mind-mangling indulgence of ambient projects Devlab (2004) and The Hummer (2006).

Townsend’s already singular vision seemed to blossom tenfold after he disbanded SYL in 2007. Surrounded by an all-star cast of collaborators, most notably vocalist Anneke van Giersbergen, his solo work has veered off in numerous directions, but with a tireless dedication to writing huge, uplifting tunes, even the most bizarre and ingenious of Townsend’s ideas seem to hit the target.

From a four-album concept piece about a cheeseburger (Ki/Addicted/Deconstruction/Ghost) to an album of ghostly country rock (Casualties Of Cool), everything that bears the Devin Townsend stamp seems to add to the richness of his reputation. Increasingly ambitious and theatrical live shows have also become central to his appeal.

Quite what sci-fi alter-ego ‘Ziltoid The Omniscient’ (essentially a phallic sock puppet with a dangerous coffee habit and a penchant for fart jokes) represents is open to debate, but Townsend even squeezed two albums out of him. You want unique? Here he is.

If you’ve ever wondered where to start with Devin Townsend’s daunting catalogue, this is the one. A sustained blast of glorious melody and effortless ingenuity, Epicloud encapsulates everything that has made him such an unassailable cult hero.

After a fizzing, choral kick-off, the sublime voice of Anneke van Giersbergen (one of Dev’s regular collaborators) ushers in 50 minutes of gleaming, flawless prog metal that feels custombuilt to make even the moaniest goth feel better.

From the rollicking glam-metal stomp of Lucky Animals to the sparkling bombast of Grace, it’s one ruddy great CBD enema for the ears.View Deal

After years of attempting to compartmentalise his various musical styles, Townsend threw caution to the wind and everything else for his eighteenth studio album.

Empath has grandiose prog metal epics (Borderlands), absurdly uplifting sing-alongs (Spirits Will Collide) and even a twinkly-eyed Disney ballad (Why?), so it should be a rambling, incoherent mess.

Devin’s solo debut was a daft pop-punk pastiche concept album called Punky Brüster – Cooked On Phonics, released in 1996: but this was the real beginning. Ocean Machine showcased a new sonic and melodic world, wherein yard-thick reverb and hazy New Age vibes collided with riffs the size of skyscrapers and melodies that soared.

A perennial fan favourite, Ocean Machine has stood the test of time: Townsend performed it in full at the Ancient Roman Theatre in Plovdiv, Bulgaria, in 2017 with a full orchestra and choir in tow. Not surprisingly, many tears were shed.View Deal

Still arguably the most absurdly epic of all Townsend’s albums, Terria introduced fans to a more pensive, cerebral side to the Canadian’s solo work. More importantly, it took him firmly into progressive territory, with starry-eyed epics like Earth Day and Tiny Tears offering a more indulgent and expansive take on an already unique blueprint.

A heartfelt paean to nature and its endless magic, Terria was pointedly bereft of the goofiness and self-mockery that had previously typified much of his material. It’s a beautiful and sincere piece of work; tinged with melancholy but ultimately, overwhelmingly uplifting.View Deal

It’s almost impossible to separate Strapping Young Lad from the rest of Townsend’s catalogue, so fundamental was their frontman’s personality to the whole thing.

Although it tends to sound like a fleet of spaceships carpet bombing the Death Star, the band’s finest studio record still brims with the melodic ideas and textural restlessness that underpin his solo records.

Turbocharged extreme metal is plainly not for everyone, but songs like Love? and Shitstorm are as potent as any in the DT catalogue. And there are few things more exhilarating than the sound of legendary drummer Gene Hoglan at full pelt.View Deal

Something magical happens when Devin Townsend and Anneke van Giersbergen sing together. It happens repeatedly on Addicted: a collection of sublime, radio-friendly alt.rock anthems that fizz and froth with joyous, sugary abandon.

The follow-up to the overtly proggy Ki and the precursor to the deranged metal of Deconstruction, Addicted proved that Townsend could do streamlined and succinct while driving everyone cheerfully potty with urgent, sparkly earworms.

Exemplified by the pulsing, infectious Cheap-Trick-on-MDMA rush of Bend It Like Bender!, it’s a riot of positive vibes and giant, euphoric tunes.View Deal

The first of two albums credited to the Devin Townsend Band (the other, Synchestra, is also great), Accelerated Evolution seemed to scratch a particular itch for its creator.

Superficially, this was a thunderous, immaculately produced alternative rock record, albeit with Townsend’s instantly recognisable voice leading the way, but a significant re-setting of musical values was also underway.

With tunes and riffs at the forefront, the likes of Depth Charge and Slow Me Down are among his most powerful rock songs, while the sprawling Deadhead and the tense, delicate Traveller kept the progressive fires burning. An underrated gem.View Deal

It’s also his most insane by some margin, as he plunged deep into the warped world of avant-garde extreme metal, with all the tooth-rattling blastbeats, grotesque orchestration and phlegm-dislodging growls that such things demand.

There are real songs here too – Juular is an absolute belter and Sumeria is intermittently lovely – but Deconstruction’s charm lies primarily in its utter disregard for the listener’s sanity. Or, indeed, for Townsend’s.View Deal

Joining forces with fellow Canadian vocalist Ché Aimee Dorval, Townsend conjured Casualties Of Cool as a vehicle for a batch of gentle but off-kilter country rock songs that had been piling up in his idea shed.

Propelled along by Johnny Cash’s ageless boom-chicka-boom beat, each song emerges, drifts serenely along and then morphs into the next, the two singers whispering sweetly over strummed acoustics and a persistent wash of ghostly ambience.

Also notable for the presence of Frank Zappa alumnus Morgan Ågren on drums, Casualties Of Cool is a beautiful and strange anomaly.View Deal