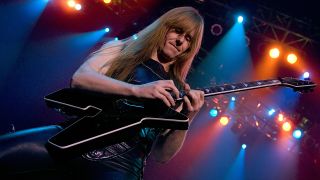 The Charlotte Observer say that Logan admitted downloading and keeping child pornography, with the 55-year-old jailed after pleading guilty at a federal courtroom in Charlotte to two child-pornography counts.

Logan will be sentenced on a date still to be confirmed.

A warrant was issued for Logan’s arrest by the Mecklenburg County Sheriff’s Office in August 2018 and he was subsequently arrested and charged with six counts of third-degree sexual exploitation of a minor.

North Carolina law stipulates that the charge is delivered when “a person commits the offense of third-degree sexual exploitation of a minor if, knowing the character or content of the material, he possesses material that contains a visual representation of a minor engaging in sexual activity.”

In the days following Logan’s arrest, Manowar issued a statement distancing themselves from the guitarist and saying they would continue on without him. They’ve since brought EV Martel into their lineup.