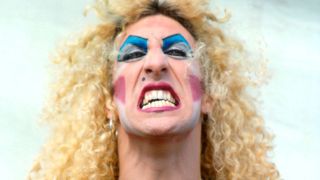 What was the strangest part of your experience with the PMRC [Parents Music Resource Centre]?

“Being named as the poster boy of all the evils in heavy metal, when the fans knew Twisted Sister was one of the least offensive bands. So when parents were saying, ‘Well you can go and see Mötley Crüe and Slayer, but you can’t see Twisted Sister,’ kids were like, ‘Sure, OK, no problem, we were getting kind of tired of them anyway!’”

How was it swapping spouses with Flavor Flav for Wife Swap?

“I look back at it with growing anger, but not because of Flav. Before we did the show the production company insisted they send a psychiatrist to interview every member of my family, including my children, which really offended me. Six months later Flav went after his fiancée with a butcher knife and when her son got in the way, he chased him with a butcher knife. So who didn’t pass the psychiatrist test? Where was the fucking bar set?”

Have you had any experience over the years with stalkers?

“I am a bad guy to stalk. People used to come to my house and peer over the fence and that’s one thing, but one day some guys climbed over into my yard. I got my chainsaw and went running out after them with it! Needless to say they left very quickly. No one believed that story until I told it on Howard Stern and one of the guys called up and said, ‘Howard, that was me!’”

When was the last time you were starstruck?

“I went to the Rock And Roll Hall Of Fame and was given a behind-the-scenes tour. As we were about to enter one of the rooms they told me, ‘This is a white glove area, please resist any temptation to touch.’ I looked at the guy and said, ‘I’m Dee fucking Snider, I’m really unaffected by this stuff.’ We walk in and on the table was John Lennon’s New York t-shirt and Jimi Hendrix’s psychedelic painted Flying V. I turned to the guy and said, ‘I want to apologise, you needed to tell me not to touch, I would grab the shit out of that.’”

What’s the worst thing you’ve read about your band during your time together?

“The thing that bothers me in general is the assumption that we only played what we played because that’s all we were capable of playing. I could have sung anything I wanted, but I wanted to sing straight-ahead rock/metal anthems. AJ Pero [Twisted Sister drummer] was a child prodigy, he played metal because that’s what he loved, and that goes for everyone in the band. We loved that music, but that’s not all we were capable of doing.”

What do you think was your biggest onstage disaster, assuming you’ve had any?

“I remember we were opening for Y&T and some fucker had these huge, fist-sized metal bolts, and he was throwing them like baseballs. They were flying through drumheads and I could not find this guy. I turned the lights on, I tried to call him out and finally he hit me in the ribs with one, and for the first time ever I ended the show and walked offstage. It still haunts me to this day, that I walked off.”

What do you consider to be your least favourite drug?

“I never did any drugs or drank. My favourite drug is caffeine, and I do it a lot. It’s legal and it sure does the job. But booze is probably my least favourite drug. I don’t like the effect it has on some people. Coke just seems to make people really caffeinated and pot makes people a bit stupid, but they’re mellow.”

What’s the most difficult situation you’ve ever found yourself in?

“Someone tried to kill me with a pick-up truck. It got way out of control, from cutting each other up, to giving each other the finger, to a level I didn’t want to go to. Subsequently I was arrested for assault with a deadly weapon for hitting him with a tyre iron as he was trying to rip me out of a partially open window. I wound up spending the night in a New York City jail. That was a bad night.”

What was your most memorable groupie experience?

“I’ve been with my wife for 37 years so I really don’t have those experiences. The other guys would actually get pissed off with me because attractive girls know they’re hot and that you’ll put up with anything if they suck your dick, so they have attitude. And since I had no intention of going down that path I was free to call them out on their bullshit and harass them mercilessly. Meanwhile the other guys would look at me like, ‘Dude, we’re not abstaining!’”