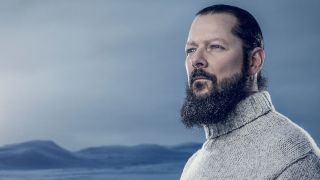 After six acclaimed solo albums, peaking with this year’s stunning Arktis, Ihsahn is clearly on a roll. 2017 will see him even busier than usual, both as a solo artist and with more Emperor reunion shows to mark the 20th anniversary of Anthems To The Welkin At Dusk. We the man himself for some insight for his life away from the stage and studio and he told us about his former life as, erm, a ski jumper…

“I’ll have to check my Spotify playlist! Of course, I should say that I listen to everything on vinyl, but I’m a Spotify guy. I’m going to buy a new turntable quite soon. Spinefarm are reissuing a bunch of things soon and I keep receiving test pressings but I have to go to my brother-in-law’s to use his turntable. It might surprise you to know that I’ve been listening to The Ultimate A-Ha Collection and Abba Gold. That’s pretty metal, isn’t it? Something else I’ve been listening to is an album by a hip-hop artist called Childish Gambino. It’s called Because The Internet. He does some really interesting things, production-wise. I get bored with the usual sounds that everyone uses in metal, so it helps to get a fresh perspective. He has a new single called Me And Your Momma, too, which is pretty far out. I’ve been listening to the new Opeth album, of course, and I’ve been tapping into some old Diamanda Galas records too, but that’s not a surprise. I really enjoyed the new Ghost EP, Popestar, especially the Eurythmics cover and how they changed the riff to sound more menacing. That was great. I always go back to The Omen soundtrack, too. Classics to get you in the mood! I love the new Rival Sons album too. That song Fade Out, it’s the most epic guitar build-up for a solo /ever/. You don’t get that very often anymore. It’s the greatest guitar solo I’ve heard, post-Prince.”

“In the last few years, I couldn’t be more proud of being an avid adversary of religion, in a general sense. If you look at the world today, it all makes sense to me now. It feels good to still feel that opposition to those kinds of powers. That’s not entirely a political thing, but then so much of politics is influenced by people’s superstitions. It’s crazy, the things we are meant to accept because we have to respect people when they believe in supernatural things. It’s like mediums and psychics on TV… imagine those people saying ‘No, we can’t allow kids into this classroom because it’s haunted!’ Well, that’s basically the same thing, it’s just not culturally ingrained and no one takes it seriously, but religion is an older, bigger thing. As far as politics are concerned, I guess everyone was pretty surprised about Donald Trump winning the presidency. There’s not much to say, really. How is that even possible? It’s going to be an interesting time. I hope, for once, that bureaucracy is very slow and old-fashioned, so it takes a very long time to make changes! I think people knew that if they voted for Hillary, things would be the same, so they voted for something crazy just to change things.”

“I’ve had periods where I’ve been trying to be good at doing regular sit-ups and working out like that, but it never really goes on for long. Prior to playing shows, I try to keep a good, healthy diet. Luckily for me, we have two dogs so I’m bound to walk one of them every day. That keeps me walking, in the forest or the mountains or whatever, every day. So that’s all I do, really. I should do more, but it’s age! I have fucked up knees and I can’t really run very much. My wife, Heidi, does yoga every day and walks the dog for a minimum of one hour, and at the weekends she can be gone for six hours, just walking in the mountains alone. I think she took a health test and it claimed she had the body age of 23. I have something to aspire to! There’s an app that guesses your ages and we both did it. She got 27 and I got 63. That’s how it is with rock stars, though. When you’re 63 you have a girlfriend who’s 27, right? Ha ha!”

“There are two shows that have made a great impression on me lately. The problem is, when you find something really great it then becomes very hard to find something that matches with it. I watched Hannibal and that made it hard to find anything as good, but that was remedied when I saw Stranger Things. Apart from those two, I haven’t seen anything worth mentioning! It was the atmosphere that made Stranger Things so good. We’re the generation that grew up with ET and Goonies and Gremlins, and that vibe was there. I very much liked the whole concept of The Upside Down. Not that it was necessarily intended like that, but it was a parallel world, reflecting a different side of things, and I guess it’s easy to relate to that in a black metal aesthetic way, when you see the world through those glasses.”

“I wasn’t good at sport when I was a kid. Guess who always had to be the goalkeeper? Ha ha! It wasn’t like I was picked last, but no, I was never interested. My neighbours that I played football with, all they ever thought about was soccer but it was never my thing. Even though I love technology, I’m very happy that I grew up in an age without internet. When I was bored at home, for all those hours, I had to practice guitar. That said, we do watch some winter sports, because we’re always winning those! Ha ha! Of course, in later years I’ve dragged out an old pair of skis and that can be fun. Growing up, I practically lived outside with skis on my feet during wintertime. I actually did ski jumping. I never really did the big jumps, because I wasn’t old enough, but my father took me when I was nine or ten and we went to Falun in Sweden, to one of those plastic ski jump arenas. Mind you, the only picture I have from that trip is of me showing off a huge Kiss poster, ha ha! At that time there were no magazines in Norway covering metal, so you had buy the Swedish magazine OK. The soundtrack for that trip was Twisted Sister’s Come Out And Play album, all the way there and all the way back. I drove my family insane.”

“My son is always playing video games and Pokémon Go and all that stuff. He said to me, ‘You only play Cubase!’ That’s been my toy of choice since I was 18 or so. My new guitars are fantastic new gadgets, though. They’re technologically advanced because they’re a composite. There’s not a shred of wood in those guitars and that makes everyone sceptical, me included. But how many professional skiers would go back to using wooden skis, you know? I guess it’s just the future. These guitars are a different league. They have the acoustic properties of perfect wood, and since there’s no hit-or-miss like there is with organic wood, they resonate evenly through the whole scale, with no dead parts on the fretboard. Touring with them, there’s no humidity problems or anything. They’re my favourite new toys, for sure. But generally I really prefer new old things, like analogue synthesizers and all the old stuff that’s coming back.”

“Because I live here in Notodden, I only ever meet fans when I’m doing shows. Then it’s great because I’m in the right mind-set. I feel very privileged. In the beginning I found the whole thing very awkward, signing autographs and having pictures taken, but as a music fan myself, when I met some of my idols, they’re representatives of so many experiences and memories and they become a focus point for that. It has nothing to do with them as private people. I try to remember that. When I meet fans they can be very emotional. I’ve been part of something they’ve invested time and feelings and memories into, and I just have to be very respectful of that. There have been some crazy fans along the way. I did get given a bag in America once, with dried flowers and incense in it, a mix of things, and everything had a particular meaning, but I had absolutely no idea what it meant, ha ha! It was almost like a small cult that had been comparing old Emperor lyrics with Peccatum [old Ihsahn side-project] and Starofash [Heidi’s solo project] and Ihsahn lyrics and making sense of all of it, making connections that I wasn’t aware of. That’s the strangest thing I’ve had, I think. Recently, I got a card from a German family whose new-born son is now called Ihsahn Vegard [Ihsahn’s real name]… and that’s the third or fourth child that I know of that’s been named after me! That’s pretty strange but I’m flattered, of course.”

The Black Metal Quiz: from Celtic Frost to corpse paint