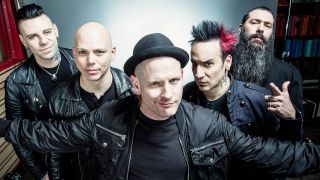 A lot hashappened in the four years since Stone Sour’s last album. Jim Root left the band in a reportedly not-so-amicable manner, Corey Taylor released The Gray Chapter with Slipknot, and Christian Martucci and Johnny Chow were promoted from touring musicians to full-time band members. On Stone Sour’s next album, Hydrograd, due out this month, they explore classic rock influences and even throw in some singalong choruses. Taylor and guitarist Josh Rand elaborate on the new chapter.

Why are you releasing the new album now? Are things quiet in Slipknot land?

Corey Taylor: Mostly that. We’ve been preparing this for two years. We would have gone in sooner, but by the time I got off the road with Slipknot I was still wearing a neck brace and it was holiday time. We waited till the very last minute, till we couldn’t wait any longer.

How are things with Jim Root?

CT: Jim’s doing his thing and we’re doing our own. Out of respect to Jim we just let him get on with it. I’m not sure where he is in regards to this band. He seems like he’s okay. I could be totally wrong. But we’re leaving it at that because anything else would be conjecture.

You’ve said fans will “freak out” when they hear Hydrograd. Why’s that?

CT: The natural pop is going to catch people – this natural bounce and groove that came from recording everything live without a click track. It’s completely the opposite of what’s regarded as the norm for ‘active rock’ or whatever that fucking cringey shit is. The biggest delight has been watching people’s reaction – they keep saying: “Can I hear that again?” And really, that’s the best review you can get. I think they’ll be taken by the fact that it’s the first proper album that’s captured us in a way we’ve never been able to do before.

There’s a lot of melody and classic rock-inspired sounds. What if people think you’ve become one of those ‘cringey active rock’ bands?

CT: I feel like there’s a weird attitude where people are ashamed to be what they are. I call it the Silverlake syndrome, the too-cool-for-school bullshit, and you get to a point where you only want to appeal to like twenty-seven people in Boulder City. Why did you get into a band, then? It’s just silly and pretentious. We’re going to have thousands of people singing these songs. And guess what? That’s exactly what I wanted! We’re not one of these bands that considers ‘rock’ a dirty word. We embrace the fact that we’re a rock band.

Why did you choose Jay Ruston (Anthrax, Steel Panther) to mix and produce the new record?

CT: He’s probably got the best rock ears in the business right now. At first we were thinking about producing it ourselves, but thought it would be great to have that outside set of ears.

Josh Rand: I’ll admit that I was on the fence about him being the mixer, because I always thought it’s good for it to change hands to somebody who hasn’t been in the creative process. But the more I looked at it and did research, all the classic records that I love, that’s how it used to be. Everyone’s comfortable with him, and when we recorded this record it was almost like jamming in a basement.

Hydrograd is released on June 30 via Roadrunner Records.