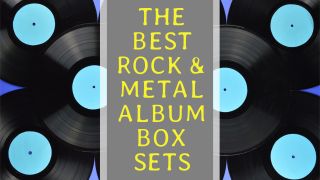 CD and vinyl box sets have seen an upswing in popularity in the last few years, as physical formats have replaced their digital brethren and cemented their place as the music connoisseur's choice of collectible. Increased demand has seen a spiralling number of ever-more-creative box set and deluxe options flood the market. These epic offerings are veritable treasure troves for vinyl fanatics, and often add fresh colour to classic albums thanks to stacks of unreleased material, rarities, live cuts and reams of written material.

That’s without even considering all the increasingly inventive swag that finds its way into these pimped up packages: badges, patches, signed gear, artwork, a pair of sweaty old pants worn while on the road – well, maybe we've not reached that stage quite yet.

Here, we’ve hand-picked our favourite offerings from all of rock's myriad genres, each of which we consider an excellent example of the love, care and imagination that goes into creating the ultimate fan-package box sets. Pair them with the best turntables for a vinyl listening experience you won't forget.

Are box sets a good investment?

Vinyl's popularity doesn't show any signs of slowing down any time soon, but are box sets and special editions likely to keep their value? Well, this all depends on a couple of things – one of which is your ability to keep your vinyl collection in tip-top condition. A quick browse of Discogs reveals that if you keep your copy in mint condition—that means no using those decorative coasters as actual coasters and giving them a good clean once in a while—then generally they’re a safe bet.

Another thing box sets have on their side is limited availability—they’re pressed and released in small quantities, often in a one-and-done type deal. Even a release like Bruce Springsteen’s Live 1975-85 set (which has gone Diamond in the US for over 10 million sales across multiple formats) will fetch £50.00 in good nick.

It’s no surprise that Guns N’ Roses’ entry into the game is defined by excess. They have brought the over-the-top excitement of the Sunset Strip to bear on this slick repackaging of Appetite For Destruction, stacking it with remasters and curios across multiple 12”s and 7”s. Also crammed into its wooden cabinet are rings, plectrums and pins inspired by the artwork, lithographs, a book, reproduction flyers and tickets, buttons, and patches. It’s a beast, with a price to match.

Woodstock - Back To The Garden 50th Anniversary Collection

This five LP set, backed by an accompanying book, is an accessible avenue along which to explore one of the most important events in the history of music. Boasting performances by Creedence Clearwater Revival, Joan Baez, Santana, Janis Joplin and Crosby, Stills, Nash & Young, Back To The Garden does a fine job of illustrating the sounds that underpinned a cultural sea change. Its daunting big brother ran to 38 CDs and 432 tracks, so view this as a nice introduction.

If Woodstock encapsulated the hopes of the hippie movement, then Let It Bleed was a sort of full stop to the ‘60s. Released 50 years ago, prior to Altamont, the album captured the Stones in turmoil but firing on all cylinders. This set is headlined by stereo and mono remasters on vinyl and Super Audio CD plus a 7” starring Honky Tonk Women and You Can’t Always Get What You Want. Elsewhere, luxuriate in lithographs, posters and a hardcover book.

Led Zeppelin’s Super Deluxe reissue series - each of the group’s studio LPs have received the treatment - has allowed admirers to dig around under the bonnet and find out what made the band tick. Featuring a remastered take on Led Zeppelin IV spread across vinyl and CD, plus a raft of alternate takes, rejigged artwork and a heavyweight box, the magic here is found in fleshing out the nuts and bolts of a release that has achieved mythical status.

Metallica - ...And Justice For All Super Deluxe

As well as satisfying diehards, reissues can give bands the chance to reframe contentious episodes in their history. This huge set from Metallica allows one of their most progressive, difficult LPs time in the spotlight. Released between the twin pillars of Master of Puppets and Metallica following the death of bassist Cliff Burton, here ...And Justice For All is remastered across vinyl and CD, with room for live albums, a picture disc, unreleased material, plus tour laminates, patches and prints.

Released to some fanfare in 2018, this retrospective provides a thorough look at a vital piece of the US indie-rock jigsaw puzzle. The seven LP set collects restored audio from Liz Phair’s 1991 Girly-Sound tapes and runs through to the totemic Exile In Guyville album, which has been remastered here by Emily Lazar. Throw in a book containing an oral history plus essays by Phair and esteemed cultural critic Ann Powers and you have a dead cert on your hands.

This weighty set assembles the work of the latter iteration of Pink Floyd, compiling David Gilmour, Nick Mason and Richard Wright’s releases across 18 discs (mainly CDs, with a couple of 7”s). Featuring A Momentary Lapse of Reason, The Division Bell and The Endless River plus the live albums Delicate Sound of Thunder and Pulse, it also zeroes in on 13 hours of unreleased audio and video, including live sets from Venice in 1989 and Knebworth the following year.

Chronicling a pivotal year in the life of Motörhead, 1979 delves into the band’s Overkill and Bomber LPs, which were released months apart. With Lemmy flanked by Phil ‘Philthy Animal’ Taylor on drums and ‘Fast’ Eddie Clarke on guitar, these records are iconic metal documents and this set seeks to add to their legend with new half-speed masters from the original tapes, unheard live tracks, b-sides, a 7”, a programme, badges, and a ‘magazine’ featuring unseen pics and fresh interviews.

Often voted the greatest album of all time and now available as a 6 disc set (4 CDs of audio, including a new mix), plus 2 DVD/BluRays and a hardback book, this collection gives an unprecedented insight into how The Beatles made their ground-breaking album.

Featuring all the 7" singles from the decade, some on 7" vinyl for the first time, this Limited-Edition release offers sixteen 7" black heavyweight vinyl records housed in a rigid lift-off lid box, plus a booklet with quotes and chart history of each single along with a selection of rare foreign covers and memorabilia.

Bon Jovi – The Albums vinyl boxset 24 LP box set featuring all of Bon Jovi’s studio albums remastered on 180-gram heavyweight vinyl. In the set are all of the band’s studio albums, including 6 albums available on vinyl for the very first time plus an ‘Extras’ bonus discs featuring rare b-sides from Bon Jovi’s international single releases and both Jon Bon Jovi's solo records.

The Beatles White Album Deluxe Edition 4 LP set
Presented in a lift-top box with a four-page booklet, the limited edition Deluxe 4LP vinyl set presents the 2LP album in a faithful, embossed reproduction of its original gatefold sleeve with the fold-out poster and portrait photos, paired with the 2LP Esher Demos in an embossed gatefold sleeve.View Deal

Yes – The Studio Albums, 1969-1987
Rhino's exhaustive 12-disc boxset includes the albums: Yes, Time and a Word, The Yes Album, Fragile, Close to the Edge, Tale from Topographic Oceans, Relayer, Going for the One, Tormato, Drama, 90125 and Big Generator.View Deal