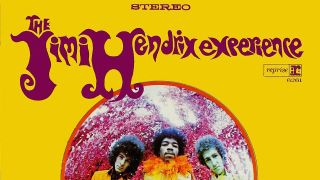 The previous winter, he’d touched down in London as a black Seattle nonentity, but quickly became a word-of-mouth sensation, blowing away quaint notions of how the electric guitar could be played with riffs that sounded like everything from a choir of angels to a warplane dropping napalm on the Vietnam jungle.

On stage, Hendrix was trailblazing, mind-blowing, game-changing… and totally intimidating to his peers (“My relationship with Jimi was a bit difficult,” admits Jeff Beck. “He and I were both after the wild guitar playing”).

It’s fair to say that Are You Experienced (there is no question mark on either the US or UK release) also made British rock’s class of ’67 sweat. Although it was denied the UK No.1 spot by Sgt Pepper, this debut represents a year-zero for rock guitar; a line in the sand that only Van Halen’s debut comes close to matching. It, and Jimi, changed everything.

It was recorded at various US and UK locations with manager Chas Chandler at the desk, but the meat of the record (including Foxy Lady, Can You See Me, Red House and Third Stone From The Sun) was nailed at a session in December 1966, when Jimi took four Marshall stacks to the CBS Studios for engineer Mike Ross to mic at a distance of eight feet. “It was the loudest thing I ever heard in that studio,” he noted. “It was very painful on the ears.”

Hendrix’s debut sounded futuristic, too, but it wasn’t beamed from space. Study the record and you’ll hear the influences that anchor him to the American blues lineage; dip into early interviews and you’ll find nods to artists ranging from the obvious (BB King, Louis Jordan, Albert King, Son House) to the esoteric (Washboard Sam, Smokey Smothers). “The first guitarist I was aware of was Muddy Waters,” Hendrix told Rolling Stone. “I heard one of his records when I was a little boy and it scared me to death.”

Hendrix’s genius on his debut was to fuse those dusty blues recordings to his own rampant vision; abusing the format; trampling on the structure; putting notes where a hack bluesman would not; pinballing off at tangents. Essentially, the blues gave Hendrix a canvas to splash with his guitar pyrotechnics. “Seeing Jimi absolutely, completely destroyed me,” noted Pete Townshend. “He took back black music; he came and stole R&B back… but added a whole new dimension.”

You can hear the tug-of-war between traditional and visionary on Manic Depression, Fire, and most acutely on Red House, which is 12-bar blues doused in kerosene. “To me,” Experience bassist Noel Redding once said, “Red House was Jimi’s way of using his musical roots – everything he knew and understood best – in our pop context. It allowed him infinite freedom in a familiar area.”

The majority of ‘important’ albums also tend to be self-important. Are You Experienced is an exception: a sky-scraping, musical high-wire act, fuelled by the sheer exuberance of a 24-year-old genius. Hendrix would arguably make better records, but none of them changed the world order like this one did.

Buy it from Amazon. Or steam it on Apple Music or Spotify