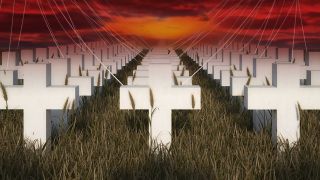 On the morning of March 3, 1986 the staff of Shades record shop in London’s Soho district arrived for work to find a queue of kids stretching along St. Anne’s Court and down nearby Wardour Street. This was not a common sight for a Monday morning, but owner Mike Shannon had been forewarned that this might be a busy day.

The previous week, Shades had taken delivery of 1,000 copies of Metallica’s third album, Master Of Puppets, from the band’s UK record label Music For Nations, and the label had bullishly predicted that the shop might want to increase its order to satisfy their expected demand for the record. That weekend, staff at Shades had spent a couple of hours placing copies of the album in plastic bags, complete with pre-printed till receipts, just to be prepared for the anticipated Monday morning rush. It would prove to be time well spent.

Music For Nations label manager Martin Hooker called into Shades around lunchtime on March 3. He stood watching as a seemingly endless parade of metal fans streamed into the tiny basement record shop to exchange crumpled notes for an eight song collection his record label was advertising in the music press as “over 50 minutes of metal perfection.”

“They were just passing out copies all day,” Hooker later recalled. “I watched with my jaw dragged flat to the floor. It was unbelievable.”

Over 30 years on, it seems astonishing that Master Of Puppets, one of the most revered, inspirational and influential metal albums of all time, never even broke into the UK Top 40 in 1986, peaking at number 41 in the national album chart in a year when Iron Maiden and Bon Jovi scored Top 10 releases. But chart statistics alone cannot measure the significance of an album which set its creators up as the kings of a new age of metal and changed the face of the genre forever.

For those of us for whom Master Of Puppets was our entry point to Metallica (respect to the early adaptors who’d got on board with the No Life ‘Til Leather cassette, Kill ‘Em All or indeed 1984’s superb Ride The Lightning album, which had sold some 85,000 copies across Europe by the time MOP was filed in record shop racks), it was clear that this was a thrilling new entity even before one heard a single note of the music etched into its black vinyl grooves.

In the pregnant seconds between the stylus dropping on the record and the opening acoustic flourishes of Battery spilling forth, one’s attention was drawn to the portrait of the band which adorned the album’s inner sleeve. Shot by photographer Ross Halfin in the living room of James Hetfield and Lars Ulrich’s shared house at 3132 Carlson Boulevard in El Cerrito, California, the image captures the four band members crammed together on a couch behind a coffee table atop which are strewn bottles of beer, the remnants of takeaway food, Penthouse publisher Bob Guccione’s latest soft porn mag New Look and the July 25, 1985 edition of the San Francisco Examiner, the above the crease type of which announces to its readers that [actor Rock] ‘Hudson Has AIDS’.

At one end of the couch guitarist Kirk Hammett points a beer bottle at Halfin’s lens, at the other, bassist Cliff Burton greets the photographer with a raised middle finger. The room is a mess, but with its Blu-Tacked Iron Maiden posters on the walls and crappy stereo in the corner, it looked not unlike my own teenage bedroom, while the four cocky, smart-arse kids on the sofa, in their ripped jeans, denim jackets and well-worn band T-shirts, looked not so very different from my dirtbag metalhead mates. Compared to the stylised, slick portraits of Iron Maiden which Halfin would shoot for the Somewhere In Time album, Metallica looked positively feral. Here, you instinctively sensed, was a band to believe in, one of us.

And then the music started…

The phrase “hypnotising power” is an entirely apposite description of the effect of the 54 minutes and 46 seconds of sound contained on Master Of Puppets. As enshrined in our culture as these songs have become, the impact of Battery, of the majestic, four movement Master Of Puppets, of the slow-burning Welcome Home (Sanitarium), the beautifully atmospheric, classically composed Orion and the punishing Damage, Inc. has not diminished one iota with the passing of time. On an album conceived around themes of manipulation and control, Metallica’s mastery of the form is absolute and unerring, the performances a peerless harnessing of power, dynamics and mood. The first Metallica album entirely written by the four musicians who would record it, the songs on Master Of Puppets were assembled in the garage of 3132 Carlson Boulevard in the spring and summer of 1985 and presented to producer Flemming Rasmussen perfectly arranged in demo form before the quartet decamped to Sweet Silence studios in Copenhagen in late August to record it. Upon its release, UK music magazine Sounds hailed the set as nothing less than “a landmark in the history of recorded music.”

“I would like to say that there was something magical in the air in the summer we wrote Master Of Puppets, something that hasn’t been there before and has never existed since,” Lars Ulrich told me ten years ago as I commissioned Machine Head, Mastodon, Trivium and more to re-record the album in its entirety for a 20th anniversary tribute. “But that would be a lie. I guess we just had the right attitude and the right openness to ideas. The whole band was getting more confident.”

“Most of the record was written in May and June of 1985, from the best ideas that were kicking around on our riff tapes from the previous year,” he continued. “It really wasn’t any different this time than before – it’d basically be me and James sitting down with a bunch of tapes and sorting through the details of his ideas and Kirk’s ideas. But Cliff had [also] been in the band for a few years and he brought in a lot of harmonies and melodies. It took a little while for James and I to open up to some of Cliff’s ideas about harmony and melody because we’d never played stuff like that before. But after a while we got it and that’s when we started experimenting more.”

Structurally, Master Of Puppets aped the format of its predecessor, but here Metallica’s ideas were more developed, their confidence in their own abilities more pronounced. In a sense, Ride The Lightning was the bolder album, a fearless stylistic leap forward from Kill ‘Em All, but where that album played host to Metallica’s first dishonest song – the transparently commercial Escape, a song the band came to loathe so much that they declined to play it live for almost three decades – Master Of Puppets is both uncompromising and uncompromised throughout, the work of men now utterly convinced of their own destiny.

“Master Of Puppets is definitely a more uncommercial album than Ride The Lightning,” insists producer Flemming Rasmussen. “Definitely. Master Of Puppets is Metallica celebrating that they’ve got a major label deal and that they no longer give a shit. It was them saying, ‘We’re just going to do the stuff we like and if the record company doesn’t like it, then fuck them.’ I think that was the attitude. And it worked too. There’s not one bad song on the album, not a single one. It is just fabulous from start to finish. They had that youthful attitude of ‘we’re better than everybody else in the whole world’ and they were just out to kick some ass.”

Unusually for a major label album (Music For Nations may have been an indie, but the album was payrolled by Elektra in the US), Master Of Puppets had no single or video to promote it, no edited tracks sent to radio to nudge its creators towards mainstream success. But the word of mouth buzz on the album was quickly amplified from knowing whispers to proselytising screams. Upon release the album entered the Billboard charts at number 128, eventually climbing to number 29, unquestionably, at the time, the heaviest album ever to find itself at such dizzy heights. In the US, a lengthy arena tour with Ozzy Osbourne, then riding high on the success of his The Ultimate Sin album, placed the band in front of tens of thousands of metal fans previously wholly ignorant of the underground thrash movement which they had helped create, while in the UK the band’s very first national tour confirmed their arrival as the most significant metal band to emerge since Iron Maiden.

Though history will remember 1986 as the year thrash broke through into the mainstream metal consciousness – Master Of Puppets pushing a new breed of metal fans to seek out more extreme sounds, paving the way for the success of Slayer’s Reign In Blood and Megadeth’s Peace Sells… and bolstering interest in exhilarating albums from the likes of Kreator, Dark Angel and Destruction – Master Of Puppets was emphatic proof that Metallica had out-grown the scene and were now embarking on a journey with their own hand-drawn map. Having blown out the genre’s boundaries, the album challenged those following in Metallica’s wake to at least attempt to do the same.

If you’re looking for an indication of the album’s undiminished appeal, consider this: in 2015, 29 years after its release and with no promotional ‘hook’ whatsoever, Master Of Puppets sold 202,000 copies in the US, making it the fifth biggest-selling rock/metal album of the year (the albums ahead of it all being released in 2015).

Nearly 35 years since its release, it remains a benchmark against which all metal albums are measured.