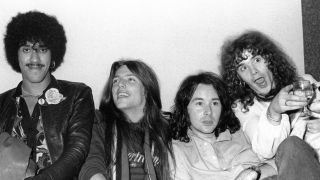 Black Star Riders guitarist Scott Gorham has recalled how Thin Lizzy were astonished when The Boys Are Back In Town became their breakthrough hit – because they hadn’t wanted it on their Jailbreak album.

The 1976 single has been listed in Rolling Stone’s 500 greatest songs of all time, and in Q’s 100 greatest guitar tracks.

But Gorham tells Classic Rock: “We were playing in some club in the US when our manager came in and said, ‘Well, looks like we’ve got a hit.’ We were like, ‘Which song?’ Seriously, we didn’t have any idea at all which song it was that had taken off for us.”

He continues: “To tell you the truth, we weren’t initially going to put The Boys Are Back In Town on the Jailbreak album at all. Back then you picked 10 songs and went with those because of the time restrictions of vinyl.

“We recorded 15 songs, and of the 10 we picked, that wasn’t one of them. But then the management heard it and said, ‘No, there’s something really good about this song.’ Although back then, it didn’t yet have the twin guitar parts on it.”

It’s a lesson Gorham has never forgotten. “Obviously The Boys Are Back In Town is the one song that really changed things for us, and I’m very thankful that it did,” he says.

“But I also think about how thin the line can be that separates success from failure. Whenever we’re discussing lead-off tracks with Black Star Riders, I always say, ‘Don’t listen to me – I’m the one who thought The Boys Are Back In Town shouldn’t have been a single!’”

He’s also recalled how Lizzy nearly split up at the beginning of their career – over drummer Brian Downey’s beard.

The fight took place in a TV studio as Lizzy were gearing up to make their US screen debut, following a short break during which Downey had stopped shaving, to mainman Phil Lynott’s fury.

Gorham says: “I remember watching this happening, this really angry row, and thinking: ‘Really, we’re going to break up over fucking facial hair?’

“But Phil was like that. He was a good guy, but he never lost sight of what it was that he wanted Thin Lizzy to be. That was what was always most important to him.”

He says of Lynott, who died in 1986: “Phil just had a gift for music and melodies, and he had the gift of writing songs that sounded wise – that sounded as if they were being sung by a man. No matter what kind of song he was singing, it sounded like the truth.”

The full interview appears in the current edition of Classic Rock, on sale now in print, digital and via TeamRock+. Lizzy offshoot Black Star Riders tour the UK in December with Def Leppard and Whitesnake: