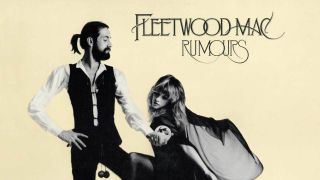 If there’s one lesson you can learn from 1977’s 45-million selling Rumours album, it’s that personal lives going to hell are really, really good for business. As Fleetwood Mac prepared to record their eleventh studio album in 1976, bassist John McVie and his keyboardist wife Christine had divorced and were barely talking, guitarist Lindsay Buckingham and on/off girlfriend vocalist Stevie Nicks were constantly at each other’s throats, and not to be outdone, drummer Mick Fleetwood’s wife Jenny (amazingly, the only partner who wasn’t a member of the band) had been having an affair with his best friend.

As if this wasn’t chaotic enough, the band’s obsession with cocaine was in full swing. Which makes it all the weirder that Rumours sounds so innocent and so much fun. The album’s 11 songs are the ultimate in earworms, and it’s only when you scratch beneath the music and dissect the lyrics that you reach the madness within.

Maybe it’s this bizarre dichotomy that makes Rumours such an enduring classic. There’s really not a bad song on it, but we’re here to make quality judgments, so here goes…

An upbeat country rock song from Stevie Nicks that dates from well before the Rumours sessions. Its jaunty acceptance of the vagaries of love masks the nastiness that surrounded the inclusion of the song on the album. The rest of the band preferred it to another Nicks tune, Silver Springs. Nicks disagreed, but eventually relented and – perhaps out of rage – recorded a superb vocal to complement Lindsay Buckingham’s own excellent performance.

A delicate song that deals with subject matter that can reasonably be summed up as ‘the symbiotic relationship between messed up relationships and cocaine.’ As with much of Rumours, the sheer loveliness of the tune hides a much darker kernel.

Written by Christine McVie, Oh Daddy has a quintessential Englishness about it that the singer sneakily slips into what is an overwhelmingly American record. McVie’s quirky keyboard fills only add to the song’s charm.

A lovely acoustic piece from Buckingham that showcases the skills of a player whose own technique has often been underrated in the rush to applaud him as a songwriter. You can’t help but feel that Buckingham’s channelling the spirit of an earlier age during these two minutes and 14 seconds of loveliness. This is what you might call a ditty, but that’s in no way supposed to be disparaging.

A delicate McVie number – deliberately recorded to give it a “concert hall ambience” – manages to avoid sinking into sentimentality, primarily because of McVie’s clarity of voice and her understated delivery. The tune’s undeniable loveliness may hide a more bitter undercurrent, given that Christine is singing “I love you, I love you, I love you like never before” to someone who isn’t the bass-playing husband she’s just recently divorced.

A Stevie Nicks composition that the other band members weren’t keen on until Buckingham managed to take the song’s basic chord structure and make three sections that all sounded different. The number moves along on an agreeably soothing bass line from John McVie and a simple Mick Fleetwood drum pattern as Nicks warns Buckingham against the dangers of thinking the grass will be greener without her. A delicate and haunting number beautifully delivered by Nicks.

A groovy little electric piano riff might at first seem out of kilter with McVie’s slightly whimsical pop melody. But this is ultimately a perfect example of why Rumours is so strong, as disparate elements mould into a coherent whole. Buckingham pulls out a number of interesting guitar textures here, which only adds to the tune’s undeniable charm.

Lindsay Buckingham stakes out the album’s emotional territory on the album’s opener. “I know there’s nothing to say/Someone has taken my place,” he says, unflinchingly. Yet while the song acknowledges the guitarist’s sense of loss after another breakup with Stevie Nicks, its feel is entirely valedictory – a jaunty, sparkly army of guitars banishes any traces of maudlin emotion. The scatty vocals sound ridiculously carefree for a song about playing second fiddle in the love stakes.

Written by Christine McVie as a positive, uplifting, ‘moving on’ song, the jaunty, barrelhouse feel of the piano riff helps to confirm the positive mood at the song’s core. Fleetwood gives the number a certain driving intensity with that quasi-marching beat he does so well, and the shared vocals – one part Buckingham, one part McVie – adds another delightful musical colour.

It makes sense that this song is in fact a composite of a number of different pieces of music from all the band members, given how it moves from eerie vocal atmospherics to seventies rock workout in the space of four and a half minutes. What’s so good about it is that it does it so seamlessly and convincingly

A bitter and somewhat self-pitying lyric from Buckingham has a very direct pop at Nicks. “Packing up/Shacking up is all you want to do.” Nicks flatly denies this was ever the case and resented the world being told so in a song, presumably even more so in a song that was so perfect for American radio. The drumbeat may have been nicked from the Stones’ Street Fighting Man, but this tune is the very essence of Fleetwood Mac.