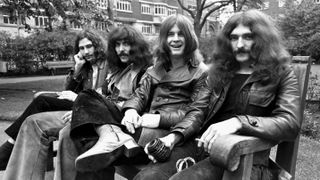 Released in the same year as their debut album, Paranoid was borne out of Vertigo’s eagerness to capitalise on the success of Sabbath’s debut album, putting the band back in the studio for a follow-up. That record, initially titled War Pigs but changed at the last minute to Paranoid, replaced the blues with something altogether newer.

Tony Iommi: We ended up playing in this one place in Zurich, the Hirschen club. We were there for a few weeks. The place was as dead as a doornail. Our audience was a couple of hookers, and some lunatic who used to come in and do handstands in front of the stage while his change fell out of his pocket. But it gave us the opportunity to jam and write, because we had so long to play. That’s where War Pigs came from.

Bill Ward: When Tony played those enormous chords from War Pigs, I would go, “Okay, what am I going to do?” So I put the whole thing in waltz time. I think the song would’ve been a train wreck had I played [straight] drums to it.

Alice Cooper: The first song I heard was probably Iron Man. First off, I thought ‘hard rock just got harder’. I also liked the fact that it has a sci-fi feel to it.

Tony Iommi: For the intro to Iron Man, I wanted something that sounded really horrible.

Frank Zappa (speaking in 1978): I like Black Sabbath. They’re fantastic. Are you kidding me? Iron Man! That’s a work of art.

Dez Fafara (Devildriver): “The first time I heard them, I was 15, doing my first bong hits at a friend’s house. His room was full of Sabbath posters. He put on Paranoid and played Fairies Wear Boots. I started tripping out!

Tony Iommi: The producer said, “We haven’t got enough songs. We need another three minutes.” So Paranoid was made up there and then. It was just a throwaway thing. While everybody popped out for a bite to eat, I came up with this riff.

Rodger Bain (producer): I remember saying, “That’s pretty good. What is that?” And sort of getting disbelief. They said, “We’re just pissing around.” I said, “Well, that’s great – let’s do it!”

Bill Ward: It was about 1:30 in the afternoon and Tony had the riffs. By 2:00 we had Paranoid exactly as you hear it on the record.

Ozzy Osbourne: I remember going home and I said to my then-wife, “I think we’ve written a single.” She said, “But you don’t write singles.” I said, “I know, but this has been driving me nuts on the train all the way back.”

Rob Halford (Judas Priest): Like many metalheads, Paranoid was the first song I heard and it was the combination of Ozzy’s unique voice, Tony’s riffs with Geezer and Bill’s heavy rhythms that really shook my head, and the world’s as well.

Released as a single on July 17, 1970, Paranoid’s title track did indeed become a Top 5 hit – surprising, considering its lyrical themes of insanity and suicide. Sabbath had become unlikely pop stars, which they weren’t entirely comfortable with.

Tony Iommi: We felt like traitors. We weren’t trying to appeal to the kids who watched Top Of The Pops. We did Top Of The Pops, and we felt so out of place. And at the gigs we started getting a lot of screaming young kids. When they heard our other stuff they probably shit themselves and ran out.

Jim Simpson (manager): Sabbath started to get approaches from several interested parties. [Notorious manager] Don Arden used a couple of his employees, Wilfred Pine and Patrick Meehan, to approach the band. The band told me they’d had a meeting in a Wimpy Bar. The fact they told me made me feel we had a bond. But Pine and Meehan split from Arden, and their first project was to take over the management of Sabbath. I only found out when I got a letter telling me that Sabbath had left my management stable. I took them to court. It took me 14 years to get everything I was owed.

The Paranoid album raised Sabbath’s profile even further on both sides of Atlantic. On October 30, 1970, Sabbath kicked off their first US tour at Glassboro College, New Jersey.

Geezer Butler: Zeppelin had already been there and kind of opened up the gates for us, but it was like they’d just never seen anything like us before. They just went mental.

Tony Iommi: We took our own PA over but we had no cases for the speakers – so when it got there it was half in bits. It was a disaster. A roadie plugged the PA in and, of course, in America the power source is different, so it blew up.

Rick Green (Promoter): They blew out not only the power in the gym, but the campus and most of the power in the neighbourhood. The street lights were out and there was darkness. Ozzy Osbourne was only 20 years old at the time. He went into the corner of the gym and started crying. He was shouting, “I hate America and I want to go home.”

Tony Iommi: Then we did the Fillmore East, and it was fantastic. We supported The Faces and we went down really well. The women seemed a lot more forward to the women back home. We didn’t know anything about groupies. It was an eye-opener.

Geezer laughs as he tells the story of how he and Ozzy both refused to play the song Paranoid when Tony Iommi originally came up with the riff.

“It was right at the end of recording the second album, which was going to be called War Pigs,” he recalls. “We were short on material, and Tony just kind of came up with the riff on the spot. But Ozzy and I thought it was too close to Communication Breakdown by Led Zeppelin. We always loved Zeppelin in them days, sitting round on the floor smoking dope and listening to that first album.

“So when Tony came up with the riff to Paranoid me and Ozzy spotted it immediately and went: ‘Naw, we can’t do that!’ In fact we ended up having quite a big argument about it. Guess who was wrong? The fact that it became such a big hit for us – and is now probably our best known song – says it all, really.

“The irony is, Zeppelin also ‘borrowed’ quite a few riffs for some of their best-known songs too. But that’s the thing about rock’n’roll, everyone does that, especially when they’re young and just starting out. It’s putting your own stamp on it that counts. And Sabbath certainly did that.”

So, how well do you know your Black Sabbath? Click on the link below to find out.