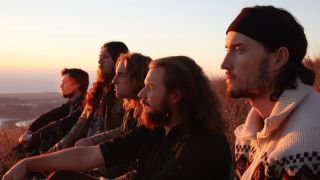 Whether it's bands, films, box sets, whatever, many of us have a growing wish list of recommendations to feast on. The problem is that the list grows quicker than it recedes. This results in some treasures getting unfairly shunted down the pecking order as new arrivals muscle in, shouting a little louder.

For me, My Morning Jacket are a case in point. Thanks to the logarithms of life, they have for years been dancing around the periphery, waiting in vain for their chance to take root in my speakers. Finally, that moment arrived, unexpectedly. A typically uninspiring lockdown morning was lifted by a new press stream arriving in the inbox: My Morning Jacket to release The Waterfall II? Well, to be brutally honest (or just plain ignorant), I wasn't aware of The Waterfall I. It was time to put that right.

It transpires that The Waterfall II is the second instalment of the band's critically-acclaimed, Grammy-nominated seventh studio album, released back in 2015. But frontman Jim James is keen to stress these are not mere offcuts – they in fact a part of the original record, which was always “supposed to be a sprawling thing”.

Upon original release, the entire set was deemed just too much to digest in one sitting and the remaining tracks have sat in the vault since. As the world locked down, James found himself hiking the mountains (at a safe two-metre social distance, following government-enforced guidelines, of course) revisiting these forgotten tracks. In his own words: “I just fell in love with it all over again. All of these emotions came flooding back to me... I hope it can bring some comfort to other folks reflecting and living and dreaming in these crazy times.”

Well, yes it can. To the uninitiated, Waterfall II works beautifully as a complete, standalone record in its own right – the perfect tonic for 'these crazy times'. These are not crude sketches, but fully-realised creations that have clearly been lived in, without ever feeling overwrought. The result is a loose, organic record underpinned by tight musicianship and the confidence of a group at the height of their powers. From the tentative opening notes of Spinning My Wheels to the blissful fade out of The First Time, it's a thrilling ride of love, loss and redemption that often takes the scenic route.

There are contemplative moments, but elsewhere it rocks hard. Just when I think I've got them sussed, another gear change and sharp left turn sends them off into new terrain. Still Thinkin bounces along on a Beatlesque vibe, before opening into a woozy, jazzy outro that wouldn't be out of place on a Cinematic Orchestra record. Welcome Home is a gorgeously understated, country-tinged ballad. Ten similar servings would prove too saccharine, but it's a soothing antidote to the onslaught that precedes it: Wasted is an epic, sprawling, psychedelic six-minute jam with orchestral stabs and ascending brass straight out of a Bond theme. Magic Bullet rolls along on a menacing, hypnotic synthy groove. Originally written in response to a high school shooting, its sense of dread serves equally well as a reflection of today's unsettling times.

So James has explicitly stated that The Waterfall II is not a collection of cast-offs. But, if music this thrilling, this so effortlessly life-affirming didn't make the original cut, how dazzling must that first record be? It's a question I'm dying to answer. Unfortunately, the new problem is that I haven't yet been able to take The Waterfall II off repeat.

Just like the album itself, there's a mix of conflicting emotions here. The first is a vague annoyance that these jammy bastards could just sit on a record that many contemporaries would give their right elbow for. Then there's the excitement of an untapped back catalogue to tuck into, coupled with regret (embarrassment, even) to have missed out on My Morning Jacket for so long. Ultimately comes the relief that there's still time to do something about it.

The Waterfall II is available on digital streaming platforms now. The album will be released on CD and vinyl on August 28 and is available to preorder.