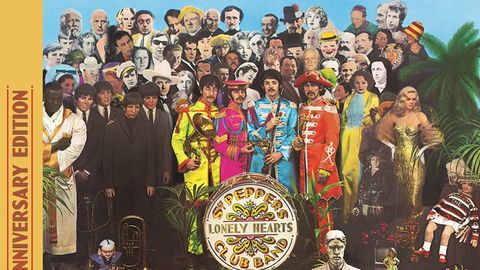 For the generation who experienced The Beatles first-hand, Sgt. Pepper’s Lonely Hearts Club Band wasn’t just the greatest Beatles album, it was also the greatest album of all time. There had been nothing like it before: a sort of concept album, born of studio experiment, and taking recorded music where it had never gone before. Its reputation dominated the popular and critical view of The Beatles for nearly 20 years, until the arrival of CDs and the renewed popularity of Fabs records such as the White Album and, particularly, Revolver, shifted the balance away from Pepper. People started to say that with Penny Lane and Strawberry Fields Forever harvested for singles, Sgt. Pepper lacked great songs (apart from With A Little Help From My Friends and A Day In The Life). They said that there were better tunes and just as much experimentation on Revolver, whose conciseness and, well, lack of 1967-ness, endeared it to a more modern audience.

But Sgt. Pepper’s Lonely Hearts Club Band is now 50, and once more walks among us, demanding appreciation and love. This time round it’s available in anything from one to six discs, with remixes, out-takes and extra tracks. Penny Lane and Strawberry Fields Forever are along for the ride this time, but yet again fans are denied Carnival Of Light, the epic instrumental that may be as unlistenable as it is unavailable. Sgt. Pepper is as deluxe as most of its original fans will ever experience it.

The first thing to say is that, despite all the revisions over the years, it’s still a brilliant album. Even without all the experiments, the tapes being thrown in the air, orchestral climaxes and use of Indian musicians, this is (largely) a set of extraordinary songs. The intro to Lovely Rita (and Paul McCartney’s inspired cry of ‘Rita!’); the warmth of With A Little Help; the spooky brilliance of A Day In The Life; the reprise of the title track; the daring of Within You, Without You; the internal rhyming of ‘and’ and ‘grand’ in When I’m Sixty Four. This album, like all great albums, has so much for the listener to unpack that you can still find new things in it half a century later. Even its weakest track, Good softwareuiphraseguid=“8c4dfa2b-debc-4db6-aca5-a5bc51566f3b”>Morning Good Morning, has a strange, basic charm (and I often wonder if the writer of Meet The Wife, the now obscure British TV programme name checked in John Lennon’s lyric, ever got a thrill from hearing his show name-checked in a Beatles record). You may have other, preferred Beatles albums, but Sgt. Pepper, its novelties aside, is a brilliant record.

Those novelties really did change music. The idea of studio as instrument, the idea that songs could be in any style, could be about anything, and could even (apparently) link up to create a larger whole, all these things were new to the majority of rock fans (let alone the huge pop majority who discovered rock through The Beatles). The gatefold sleeve, the art-school credibility of the cover, the lyric sheet – even the sheer colour of the packaging took the very idea of the album into a new dimension. There is so much new on Pepper that it’s easier to identify what’s old: the Parlophone label, perhaps. Or the fact that The Beatles followed convention and left the single off the album.

Much has been made of the absence of the greatest double A-side of all time from Sgt. Pepper, but I’m not sure if Penny Lane and Strawberry Fields really fit. They’re epics, almost mini-albums in themselves, and while they would sit neatly alongside wide-eyed visions like Lucy In The Sky With Diamonds and A Day In The Life, they don’t really go with Pepper’s smaller beauties like Fixing A Hole and Getting Better (on the other hand, they don’t half improve Magical Mystery Tour, where they fit extremely well with brilliant nutter butter like I Am The Walrus). Still, it’s nice to have them here like moons that almost outshine their parent planet.

Rock music was changed by Sgt. Pepper and so were The Beatles. Paul McCartney once said of his solo career that each new album was a reaction to the previous one, and so it was with the rest of the Beatles’ career: the White Album is almost a polar opposite to Pepper, with its plain cover, half-produced songs and movement away from experiment. (Conversely, Abbey Road, recorded in the aftermath of the naked hell of Let It Be, was a deliberate and clearly stated attempt to make a record like Sgt. Pepper again, and is thus the first great Beatles pastiche album.) They never did anything like Pepper again (although the repackaging of the Magical Mystery Tour EP as an album also looks like an attempt to clone it.

And so here we are, 50 years on, with another Sgt. Pepper. We’ve had the 1980s CD version (of which George Harrison said it didn’t sound anything like the record he knew), the Anthology out-takes (most of which were excellent, but not as thrilling as available bootleg out-takes), and the 2000s stereo and mono mixes (some of which are included here).

What, then, is the point of this sextet of discs? Well, according to Paul, the new mix is intended to reflect the original mono mix, in that all the voices and drums are in the middle, while also being a stereo mix. The result is, as it sounds, a compromise, where everything is not so much in stereo as on steroids. It’s fine, but I don’t remember any version of Sgt. Pepper (including my mid-70s vinyl copy) being this beefy. Playing the CD after the vinyl on my hi-fi nearly made the dog explode, so radical was the difference in volume and mix. But it works, and no doubt sounds better than some reissues if not all.

The real excitement for fans is of course in the extra tracks. Here there are no massive surprises (I expect – I was sent the double CD, not the full six pack), just some interesting spoken bits and a lot of Anthology-style backing tracks. The former are fascinating as indicators of how The Beatles in 1967 put together a record (and there’s an entertaining bit where Paul is talking about the shapes and bumps on the studio wall as though he’s been at the tea again); the latter don’t add a great deal (I began to get a slight headache after listening to an instrumental Penny Lane where the piano gets a good seeing-to from Macca). But we fans wouldn’t be without them. And even though it’s available elsewhere, nothing beats hearing Lennon’s spooky, mumbled “sugar plum fairy, sugar plum fairy” intro to Strawberry Fields.

I’ll probably save up for the six-disc set. In the meantime, this is a fine reminder of, and tribute to, what was and still is one of the most remarkable albums of all time.