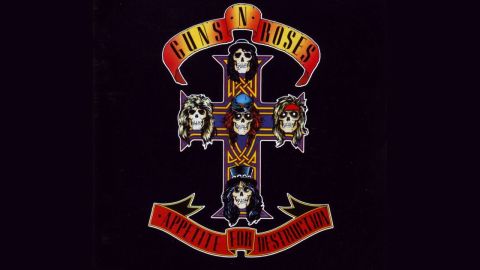 One of the greatest records of all-time (and the best-selling debut album, ever).

Appetite For Destruction is one of the greatest records of all time, and one of the biggest –the biggest-selling debut album, ever – with over 30 million sales worldwide. It revolutionised rock music in the late-80s and transformed Guns N’ Roses into superstars, its success all the more amazing given the chaos in which it was created.

Guns N’ Roses were so out of control, that the making of their debut album turned into a lengthy and expensive saga. In 1986, Arnold Stiefel’s brief tenure as GN’R manager ended after the band’s pre-recording sessions at a rented house on the former estate of Hollywood producer Cecil B DeMille resulted in a $22,000 bill for damage to the property.

Two producers failed to get the record made: Nazareth guitarist Manny Charlton (who couldn’t even get the band into the studio at the same time) and Paul Stanley of Kiss (who fell out with Axl Rose after he suggested that one song, Nightrain, required an extra hook: Rose never spoke to him again).

What this band needed was a manager and a producer who could exert some form of discipline. Enter Alan Niven, who also managed Great White, and producer Mike Clink, who had engineered UFO’s Strangers In The Night and Survivor’s Eye Of The Tiger.

With Clink working 18-hour shifts, Appetite For Destruction was recorded in one month over January and February 1987 at Rumbo Recorders studio in the LA suburb of Canoga Park. The total budget was $370,000. Expectations for the album differed. Niven predicted 500,000 sales, Clink two million. But Tom Zutaut, the A&R executive who signed the band to Geffen Records, was more confident. He said five million. In the end, they were all proved wrong. Initial sales were slow, just 200,000 copies in five months. But by July 1988 – a year after its release – Appetite For Destruction was Number One on the US Billboard chart.

On one level, the success of Appetite was astonishing. It was the antithesis of corporate rock – raw and obnoxious, full of bad attitude and uncensored swearing. In the PC climate of the mid-80s, this was precisely the kind of record that ‘parental advisory’ stickers were made for, with nine out of 12 songs making explicit reference to sex, four to drugs, four to drinking.

On the casually misogynistic It’s So Easy, Axl sneered, ‘Turn around bitch, I got a use for you…’ On Rocket Queen the singer was taped having sex with stripper Adriana Smith – the then-girlfriend of drummer Steven Adler!

But at the heart of the album was a core of truly great songs: In many ways, Welcome To The Jungle is the definitive Guns N’ Roses song, and an album opener which – from Axl’s opening words, ‘Oh my God’ – warns the listener in no uncertain terms that they better buckle up tight for the road ahead. Detailing Indiana boy Rose’s first wide-eyed, open-mouthed impressions of Los Angeles, this was the first song Slash and Axl ever wrote together, and it remains the ultimate statement of Guns’ fearless, reckless, last-gang-in-town swagger.

It’s So Easy was Guns’ first UK single, a snarling, seething introduction which double-dared you to get closer to these obnoxious, aggressive, misogynist shitbags. It’s hardly the band’s most sophisticated tune, but no other early Guns song carries such bad-boy menace.

And if much of Appetite declares that Los Angeles is a dirty, depraved, dangerous shithole, Paradise City is the album’s kicker – an admission that Guns N’ Roses wouldn’t want to be anywhere else. The quintet’s first UK Top 10 single, its simplistic singalong melody is arguably a little too eager to please, though the song may have had less global appeal had the band not changed its original lyric: ‘Take me down to the paradise city, where the girls are fat and they got big titties’. Slash’s guitar playing, meanwhile, transforms the whole thing into a sleaze-rock Born To Run, all marauding riffs and elegiac solos.

Mr. Brownstone, You’re Crazy, Out Ta Get Me: the album oozes bad attitude and is littered with great lines (‘I used to do a little, but a little wouldn’t do, so the little got more and more’, ‘Some people got a chip on their shoulder/An’ some would say it was me’, ‘Welcome to the jungle it gets worse here everyday/You learn to live like an animal in the jungle where we play’). And in Sweet Child O’ Mine, Guns N’ Roses had a secret weapon: a beautiful rock ballad inspired by Southern rock icons Lynyrd Skynyrd. Slash didn’t much care for the song at first, dismissing it as “sappy” and his own lead guitar melody as “this stupid little riff”. But it topped the US chart for two weeks in September 1988, regularly tops polls to find the greatest guitar solo or riff, and it remains the best-loved song of Guns N’ Roses’ career.

Appetite For Destruction arrived at the height of the hair metal era and was born of the LA rock scene, but its roots lay in the great rock music of the 70s – in Aerosmith, Led Zeppelin,  AC/DC and the Sex Pistols. It’s the newest album album in the top 10 and understandably so – has anybody has made a better rock’n’roll record since its release?

Buy Appetite For Destruction from Amazon.