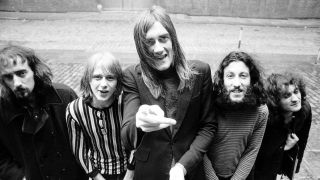 Mick Fleetwood has revealed that was only offered the drummer’s role with Fleetwood Mac because founder member and guitarist Peter Green felt sorry for him.

Speaking to Classic Rock for the cover feature of the current issue of the magazine (also available via TeamRock+), Fleetwood reveals how he only uncovered the story behind his audition success while interviewing Green for his recent book, Love That Burns: A Chronicle Of Fleetwood Mac, 1967-1974.

“I thought he was going to say: ‘Well, I thought you were a pretty good drummer.’”, says Fleetwood. “But he said: ‘You’d just broken up with Jenny [Boyd, later Fleetwood’s first wife] and you were devastated, and I just thought you needed to do something. That’s why I asked you to join the band, because I just wanted you to get back on your feet.’ How amazing was that? It really had nothing to do with whether I was a halfway decent drummer or not, it was just because he loved me and he didn’t want to see me in pain.”

Fleetwood also reveals how Green’s generosity of spirit also extended to the naming of the band: “It was all about friendship,” says the drummer. “Peter gave me confidence. I play from the heart. I don’t know what I’m doing half the time. And he told me: ‘Mick, you’re okay, just play.’ Peter was the consummate team player. Later, in an interview, someone asked him why did he call the band Fleetwood Mac? And he said: ‘Well, in truth, I thought at some time I’d probably move on, and I wanted John and Mick to have something after I left.‘”

Love that Burns - A Chronicle of Fleetwood Mac is available as a signed, limited edition of 2000, with a hand-crafted leather slipcase and a 7” picture disc of Love That Burns, a track taken from the band’s second album Mr Wonderful. It’s available from Genesis Publications.

You can read the full story of Fleetwood Mac — from the blues years to Rumours and beyond — in the current issue of Classic Rock, on sale now. Buy it online or become a TeamRock+ member to read it right now.

How Rumours took Fleetwood Mac to the peak of their success