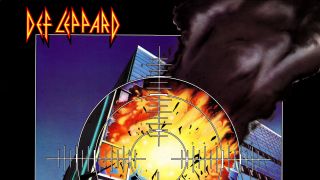 The third album from Sheffield rockers Def Leppard, released on January 20, 1983, had a lot riding on it. Recorded over an 11-month period between January and November of 1982 with renowned producer Robert John ‘Mutt’ Lange at the helm (he also got writing credits), the long gestation period and huge associated costs meant it was squeaky bum time for the band.

Pyromania would either light a fire under the entire rock scene, or it would die in the embers and put the very existence of the group in doubt. Moving from the more metal sound of 1981’s High ‘n’ Dry to something that straddled hard rock and pop, (is this the influence of former Girl guitarist Phil Collen coming on board here?) Pyromania expanded the band’s fanbase right out of the box, débuting at Number 2 on the Billboard US album chart and going on to sell a staggering 10 million albums in the States alone. Were such stratospheric sales justified? Let’s find out…

The only song on Pyromania where you wouldn’t be missing a thing if you never heard it again. The riffs are perfunctory, the lyrics banal, the guitar solo uninspired. Action! Not Words sounds for all the world like B-side material and isn’t worthy of a place on the team of a 10 million plus-selling album like this. Skip it.

There’s a classic ‘new’ Leppard trick on display here as a frantic rocker suddenly segues into what is to all intents and purposes a pop chorus. There aren’t many bands who can pull off such a trick without it coming across as forced at best, and cynical at worst. Leppard can. That said, though, this is still one of the album’s weaker moments. Joe Elliott’s hysterical vocal delivery in the verses – that’s OTT, rather than hilarious – gets on your nerves a bit and the whole thing is a tad too bozo-ish all round.

The helicopter sounds at the beginning give us a hint of where we’re going, to a song that deals with war and, presumably, Vietnam. But what’s surprising is that the lyric deals – albeit obliquely – with Post Traumatic Stress Disorder, as Elliott recounts a tale of a returning soldier who can’t leave the battlefield behind. Shame the tune itself is a bit of a let-down. It’s not bad, just a little bit ordinary.

Pyromania starts with what could almost be described as prog pop, if you can imagine such a thing. But then the mood changes, the AC/DC riffs are dusted off and Elliott even starts doing a bit of a Beano. “Women to the left and women to the right,” he notes, as the band make no bones about the fact that they can rock hard – when they want to. Cute, in a stupid-assed way.

More mid-paced driving music that was gobbled up by American radio stations. The riffs are tough, but it’s clear that the band worked double hard on creating catchy melodies here from first note to last. The pre-chorus, in particular, the ‘oh, I just gotta know…’ bit, makes this a real earworm. A clever arrangement is also the order of the day, which is surely down to the hand of Mutt.

“Unter glieben glauben globen” indeed. From this daft-as-a-brush spoken intro, Rock Of Ages is probably the best example of how Pyromania pushed the rock envelope. Built on a deliberately synthetic glam rock drumbeat and an unabashed synth line, this is metal, but not as we knew it. Purists were a little non-plussed, but the tune was unique for taking guitar music into the ‘80s with a vengeance. Perhaps surprisingly, this has aged well.

4) Too Late For Love

Somebody had been listening to a lot of UFO when they wrote this one. The opening section sounds like an outtake from Mogg and Co.’s No Place To Run album. That’s no bad thing, and once the tune revs up we’re into an atmospheric mid-paced stomper that has much to recommend. The ‘woah woah’ mid-section is a bit naff if truth be told, and the drum sound favoured by Rick Allen via producer Mutt Lange hasn’t dated particularly well. But this is still more than a worthwhile listen.

Not a track that immediately springs to mind when you think of Pyromania, but this is, in fact, a much-underrated tune. The lyrics are a bit ‘nyeh’, (“play the game, surrender to me” etc.) but the song is one of the best examples of Leppard’s ability to shift gears and move from soft to hard and back again on a number of occasions – and all in the space of a single song.

The band go for atmosphere on the album closer as Leppard stretch out and come up with a big number that clocks in at just shy of six minutes. Again, there’s a bit of that old UFO influence here, as Joe Elliott channels Phil Mogg’s knack for telling gritty stories about inner city violence. Billy’s Got A Gun is interesting, because in many ways it crystallises Pyromania, an album that took an age-old formula and reworked it so it became something shiny and new.