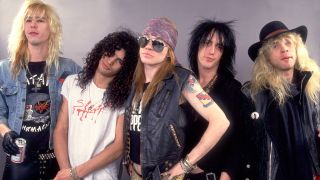 Originally titled Fucking Crazy, and written about a female acquaintance, You’re Crazy was conceived as an acoustic song, with Axl, in a rare moment of compromise, changing the title so that it might get a shot at radio airplay. Producer Mike Clink encouraged the band to record it in a faster, electric form for Appetite, but the fact that the quintet returned to the original acoustic version for GN’R Lies tells its own story.

Written by Izzy Stradlin pre-Guns N’ Roses, the sweet, upbeat Think About You is described by its author as “a quick love song about drugs, sex, Hollywood and money”. That Guns largely abandoned the song once they graduated from the LA club scene (only restoring it to the setlist post-Chinese Democracy) suggests even they considered it filler.

Most famous/infamous for the fact that it features the sound of Axl Rose having sex with Steven Adler’s then-girlfriend Adriana Smith (“I did it for the band,” the former dancer later stated), Rocket Queen was Rose’s tribute to his friend Barbi Von Greif, who he acknowledged “kept [him] alive for a while”. Appetite’s closing track, it’s an explosive end to a jaw-dropping album.

Written about Axl’s former girlfriend Michelle Young, My Michelle is a striking portrait of a young woman staring into the abyss. “I was driving Axl to a gig and Your Song by Elton John came on the radio,” Young later explained. “I said that I wished somebody would write a beautiful song about me.” That’s not quite what she got, but for those of us peeking into her decadent lifestyle from the outside, this was a grimly compelling and rather scary insight into an unimaginably fucked-up world.

A grimy Stones-inspired song about heroin, written by one-time drug dealer Izzy Stradlin. “It’s not so much a statement about our drug habits,” insisted Stradlin. “It’s a more a statement about other people’s drug habits.” The ‘I used to do a little, but a little wouldn’t do, so the little got more and more’ lyric would prove prophetic for certain members of the band. Never destined to be a single, it’s undeniably infectious, but a song to be kept at arm’s length.

Regularly dedicated at gigs to the LAPD, the furious, ‘fuck everyone’ anthem Out Ta Get Me was a largely biographical tale of the band being hassled by cops, landlords, drug dealers, girlfriends… ‘Some people got a chip on their shoulder,’ whines Axl, knowingly, ‘An’ some would say it was me.’ It scores its ranking here on attitude alone.

A dedication to the cheap fortified wine Guns lived off while sharing digs at the infamous ‘Hellhouse’: “It’s a dollar a bottle, 19 per cent alcohol and [after] a quart of it, you’ll black out,” noted Axl, approvingly. Too scuzzy and grubby to gain true mass appeal, more than any other song on Appetite, it conveyed the idea of Guns as a street gang, fucked-up, bonded by booze and forever itching for the next rumble.

If much of Appetite For Destruction declares that Los Angeles is a dirty, depraved, dangerous shithole, Paradise City is the album’s kicker, an admission that Guns N’ Roses wouldn’t want to be anywhere else. The quintet’s first UK Top 10 single, its simplistic singalong melody is arguably a little too keen to please, though the song may have had less global appeal had the band not changed its original lyric: ‘Take me down to the paradise city, where the girls are fat and they got big titties’.

Guns’ first UK single, a snarling, seething introduction which double-dared you to get closer to these obnoxious, aggressive, misogynist shitbags. It’s hardly the band’s most sophisticated tune, but no other early Guns song carries such bad-boy menace. ‘I see you standing there, you think you’re so cool,’ spat Axl. ‘Why don’t you just… FUCK OFF!’ Now that is how to make a first impression.

“A joke”, was Slash’s brutal critique of GN’R’s global breakthrough hit, but the combination of the guitarist’s chiming ‘circus theme’ intro, Izzy’s bold open chords and Axl’s tender, love-struck poetry to then-girlfriend Erin Everly was pure sunshine-streaked musical alchemy. “It’s the first positive love song I’ve ever written,” admitted Axl. “But I never had anyone to write anything about before.” Bless. Far too nice to be Appetite’s top track, but it’s the one even your grandmother will know.

1) Welcome To The Jungle

The definitive Guns N’ Roses song, and an album opener which – from Axl’s opening words, ‘Oh my God’ – warns the listener in no uncertain terms that they better buckle up tight for the road ahead. Detailing Indiana boy Rose’s first wide-eyed, open-mouthed impressions of Los Angeles, this was the first song Slash and Axl ever wrote together, and it remains the ultimate statement of Guns’ fearless, reckless, last-gang-in-town swagger.