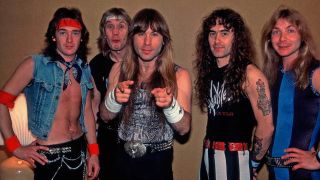 UK metallers Iron Maiden's albums are awesome, aren't they? Unfortunately, sometimes guns are pointed at heads and journalists are required to put all of the greatest heavy metal band of all time’s albums into order of preference.

It’s a dirty and frankly impossible job, but needs must. Rapiers and cutlasses at the ready, folks: here are Maiden’s studio albums, rated from worst to best. And no, you’re wrong.

It may feature Maiden’s only number one single, the enjoyably daft Bring Your Daughter To The Slaughter, but the follow-up to the mighty Seventh Son From A Seventh Son now sounds like a misguided attempt to get back to basics. There are a few decent songs here – the title track and The Assassin certainly have their charms – but thanks to the hook-free likes of Fates Warning, No Prayer For The Dying is Maiden’s worst album by some distance. Mother Russia is pretty funny, though.

Yes, The Angel & The Gambler is at least five minutes too long. Yes, the ending of Don’t Look To The Eyes Of A Stranger is a bit weird and sounds like a mistake. But Virtual XI is officially better than No Prayer For The Dying for two reasons: it has The Clansman on it, which is a stone cold classic, and the unfairly maligned Blaze Bayley sings his heart out throughout, most notably on breakneck kick-off Futureal and the gently magnificent Como Estais Amigos: an underrated Maiden gem.

The first 20 minutes (Sign Of The Cross, Lord Of The Flies, Man On The Edge) are glorious, but after that it’s slim pickings. Again, Blaze’s contribution was far, far better than he was ever given credit for and both Blood On The World’s Hands and The Unbeliever are underrated corkers, but Maiden’s dark album did a bit too much plodding and not enough galloping.

As with The X-Factor, there is half a classic Iron Maiden album in here somewhere. Only mad people don’t love the title track, of course, and you can take your pick from Afraid To Shoot Strangers, Childhood’s End, Fear Is The Key and the criminally overlooked Judas Be My Guide for a song of equal quality. On the negative side, From Here To Eternity was meat and potatoes with no seasoning, Chains Of Misery was a misplaced yob chorus and Weekend Warrior was a song about football hooligans, which isn’t the kind of thing we generally want Maiden to sing about. It’s hardly Where Eagles Dare, is it?

The 50 best Iron Maiden songs ever

Understandably overshadowed by its revelatory predecessor, Brave New World, Maiden’s 13th studio album was cursed with the band’s worst ever artwork, but beyond that Dance Of Death is pretty damn great. An album of strong moments, rather than a compelling, convincing whole, its diversity is its greatest asset. Everything from the short, sharp Wildest Dreams and the glowering No More Lies through to the towering Paschendale and the hazy, heavy rush of Face In The Sand sounded unmistakably and triumphantly Maidenesque, but in a variety of imaginative and sometimes unexpected shades (not least on acoustic closer Journeyman). And if the title track strikes you as a bit, you know, Stonehenge… well, that’s all part of the fun, surely?

Much like Dance Of Death, The Final Frontier suffers from being preceded by one of Maiden’s most momentous records, A Matter Of Life & Death. But it’s hard to find fault with the British legends’ 15th album, even if its rather peculiar, quasi-futuristic intro, Satellite 15, proved divisive among the faithful and the somewhat lightweight The Alchemist prompted many fans to shriek “Hasn’t Bruce Dickinson used that title already on one of his solo albums?” Songs like Isle Of Avalon, Starblind and When The Wild Wind Blows are among the finest Maiden have written since the return of Bruce and Adrian in 1999, and if Coming Home doesn’t make you weep like a bereaved onion farmer, you should probably consult a physician immediately.

Some may be surprised that Maiden’s (sort of) comeback album isn’t higher up the list, but that’s the band’s fault for making so many classic albums. Don’t shoot the messenger. With Bruce Dickinson and Adrian Smith joyously reinstated, Brave New World was always destined to be a stormer, and so it proved: The Wicker Man was their finest single since the ‘80s, Ghost Of The Navigator was a thrilling reinvention of the classic Maiden sound, Blood Brothers was a ballad with incisive emotional clout… and so on. Only the slightly cack-handed Out Of The Silent Planet let the side down, but no one noticed because they were too busy bellowing along to Dream Of Mirrors… “I only dreeeeam in blaaaack and whiiiiiite…!”

Again, Maiden’s latest album would be higher up the list if they hadn’t spent the ‘80s being the greatest heavy metal on the planet. It’s undeniable that its dramatic backdrop of Bruce Dickinson’s battle with cancer ensured that The Book Of Souls seemed even more of a big deal than it would have been anyway (and that’s a pretty big deal, because Iron Maiden), but the contents more than lived up to the preceding, real life commotion. From the thunderous If Eternity Should Fail and the rampaging Speed Of Light to quintessential Steve Harris epic The Red And The Black and the ferociously catchy Tears Of A Clown, The Book Of Souls is simply another creative peak for metal’s best loved band. And yes, Empire Of The Clouds is preposterous, but in the best possible way. This is what heavy metal is for, after all.

There’s only a scrotum hair’s breadth between Maiden’s first two albums, so swap them around if you must. Iron Maiden was an audacious debut: raw, fiery, subtly progressive and delivered with utmost passion and power, its songs are all established classics and its finest moments – the exhilarating Prowler, the monumental Phantom Of The Opera, the spine-tingling Remember Tomorrow – are as good as anything Maiden have ever recorded. As Steve Harris has often noted, the production is a little flat, but that hasn’t stopped millions of people from banging their heads to Running Free and perennial set closer Iron Maiden, that’s for chuffing sure.

Maiden were on fire at this point: Killers was an explosive confirmation of the immense potential the band had shown on their debut, with an even greater sense of momentum and conviction thrown in. Few albums begin with as much haughty braggadocio as this one, as heroic intro The Ides Of March and the pummelling Wrathchild give way to Murders In The Rue Morgue, a song so ridiculously exciting and joyfully metallic that it once made this writer fall off his bike (it’s a long story). It’s also worth nothing that Paul Di’Anno voice is a thing of raucous wonder throughout his Maiden swan song. His tenure was brief but props to the big guy for his huge contribution.

Is there anything more exciting than the opening drum fill that kicks Piece Of Mind off? Nicko McBrain made his presence felt for the first time on Maiden’s fourth album and with material as strong as The Trooper, Flight Of Icarus, Revelations and Dune-inspired closing epic To Tame A Land, he was given the perfect showcase for his inestimable talents. Elsewhere, Die With Your Boots On is a peerless rabble-rouser, Still Life is a slice of dark, brooding brilliance and Sun And Steel is an irresistible buckling of the swash. If you ignore the daft lyrics to Quest For Fire, Piece Of Mind is more or less flawless. I know. You try writing a fucking list. Seriously.

Nostalgia may dictate that Maiden’s run of phenomenal records during the ‘80s will always top these kinds of lists, but it’s equally true that the band’s efforts since 2000’s Brave New World deserve to be regarded with similar reverence. Of the five albums they’ve made since the millennium dawned, A Matter Of Life And Death stands out as the heaviest, darkest and most thrillingly cohesive of the lot. The fact that Maiden performed their 14th album in its entirety on the subsequent tour – and got away with it with room to spare, let’s face it – says it all: this is a stone cold classic. Highlights are many, but These Colours Don’t Run and The Longest Day would grace any list of Maiden’s greatest songs, and for those who like a dash of prog with their metal, the likes of The Legacy, Brighter Than A Thousand Suns and Lord Of Light are hard to beat.

Don’t get pissy if you think Seventh Son Of A Seventh Son should be number one. Anyone that doesn’t own every one of the top four albums in this list should relinquish their metal licence immediately. Yes, this is a flawless masterpiece and the icing on the cake of an eight-album run that has still yet to be bettered in heavy music history. It starts with Moonchild – an onslaught of goosebumps, guaranteed! – and continues through what now reads like a laundry list of platinum-plated Maiden classics, ranging from immaculate singles Can I Play With Madness and The Evil That Men Do through to the fervent proggery of the title track and The Prophecy’s otherworldly squall.

The most underrated of Maiden’s ‘80s albums by a mile, Somewhere In Time came between two major milestones and, as a result, seldom gets the props it deserves. In fact, it’s fucking stunning and still sounds fresh and vital 30 years later. Caught Somewhere In Time is one of Maiden’s greatest album openers, Wasted Years one of their finest singles and closing epic Alexander The Great is a strong contender for the song most Maiden diehards would cheerfully stab a relative to see performed live. Oh, and then there’s Heaven Can Wait… and Stranger In A Strange Land… and Sea Of Madness! SEA OF FUCKING MADNESS! This is a really good album. Yes.

There is only one reason that The Number Of The Beast is not sitting at the top of this list, and it’s name is Gangland. One filler track aside (and yes, I agree, they should have put Total Eclipse on instead), Bruce’s first album with Maiden is a wall-to-wall triumph. Never mind the classic singles, listen to Children Of The Damned or Hallowed Be Thy Name or 22 Acacia Avenue and try not to feel instantly better about your life. Guaranteed to feature in every list of the greatest heavy metal albums ever made, and rightly so, The Number Of The Beast is 34 years old and still slams like a Muhammad Ali haymaker.

Only a controversial choice for the number one slot if you’ve made the terrible mistake of thinking that Flash Of The Blade isn’t one of the greatest heavy metal songs of all time, Powerslave is better than perfect. If that’s a thing. The album that sent Maiden around the world on the legendary World Slavery tour, turning them into global megastars in the process, it is both the definitive record of the band’s first decade and the album with the best artwork of all time. If you could prove such things scientifically, there would be no room for argument: Aces High, 2 Minutes To Midnight, Powerslave (featuring Dave Murray’s greatest ever solo, fact fans!), the mighty Rime Of The Ancient Mariner… thanks to those four songs alone, Powerslave makes pretty much everything else that’s ever been recorded sound a bit half-arsed. I’m exaggerating, of course. But not much.