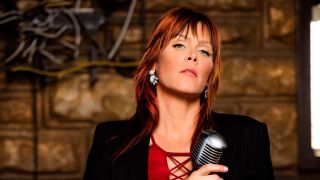 We’ve all been feeling the loss of Rick Parfitt. A rock cornerstone and a fantastic bloke into the bargain. We’ve been spinning the hits that got him on the Pops, but always come back to Piledriver. 3:30 into this, when he kicks into the third verse, it’s just brilliant. So R.I.P. Rick, the blond that always had the most fun.

Having forged a partnership with 2013’s Now What?!, Purple are back with producer Bob Ezrin for new album InFinite. This track holds a message from Mk 2’s glory era, but also has a breath of freshness running right through it.

Seductively candy-coated ferocity courtesy of this alt.rock supergroup fronted by Le Butcherettes’ Teri Gender Bender. With At The Drive-In’s Omar Rodriguez-Lopez and the Melvins’ Buzz Osborne and Dale Crover operating at full-tilt in the engine room, Chiseler will pretty much shave you dry.

5) She Does It Right - Wilko Johnson

Wilko’s Feelgoods classic re-recorded for I Keep It To Myself, a compilation of revisited Oil City gems from the Johnson archive. Gigged to perfection, delivered with eternally youthful urgency; as unmistakable as a stick of Sarfend rock.

Blatant, obvious, irresistible; Danko Jones are fearless in the face of cliché. Frontman Danko riffs into the arena of the obvious as carelessly as Angus Young and wraps a labial pout around a lascivious platitude with as little shame as Steven Tyler.

The title track of the Seps’ new album has an excitement that has for so long been missing from the band’s repertoire. It’s got a focused brutality and a concussive, almost industrial drive. This is Sepultura rejuvenated for a new era.

Missed out on Hawkwind’s late-1980s/early 1990s output? Atomhenge Records have just re-issued The Xenon Codex, Space Bandits and Palace Springs in a clamshell boxed package and they’ve stood the test of time rather well.

This Cambridge four-piece have made slow but steady progress over three albums. By turns laid-back, groovily anthemic and uplifting, this 11-minute epic from the newly released Angels’ Share reveals the full breadth of their palette.

12) Metal Is For Everyone - Freedom Call

Think of the cheesiest slice of power-metal imaginable. Now supersize it and add cheesy fries and a side order of cheese. The result is Metal Is For Everyone, one of the most ridiculous but impossibly addictive songs you will ever hear.

In 1986 Status Quo’s ‘unofficial fifth member’ released an album of songs he’d written for the group, many in the country and western form that they were originally composed. Now available in expanded form with a slew of bonus tracks.

Having spent two albums trying to escape the Thin Lizzy shadow, the Riders have succeeded on new release Heavy Fire. This song is a thundering recognition of the talents involved, who’ve taken their heritage and twisted it into a form that makes BSR feel like a fully fledged band in their own right.

The New Yorkers shot a new video for this song from debut Runaway. Hopefully it’ll ensure that the track inspired by Def Leppard, Bon Jovi and Van Halen breaks through to a bigger audience. Fiery and glowing with charm.

From the Tarkus album, this has a lyricism imbued with intelligent and challenging cynicism. Greg Lake’s voice gives expression and emphasis in all the right places, pointing out the absurdities of faith in an omnipotent being. Brilliant.

Here is the lady at her finest. No gimmicks or posturing necessary. The sheer aggression and naked passion of the performance is overwhelming. From new album Fire On The Floor, it’s a strong reason why Beth Hart has such a devoted and growing fan base.

A bonus track on the new version of FM’s acclaimed album (Indiscreet 30), this is outstanding. There’s a sedate soulfulness here that brings an extra dimension to the track. No disrespect to Ozzy, but this should now be regarded as the definitive interpretation.

What Classic Rock staffers have been listening to this month