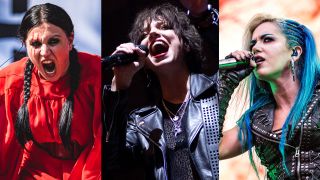 The end is nigh! Music fans have been using the term ‘female-fronted metal' to categorise bands with female vocalists for decades, bundling them all together in one untidy (totally sexist) "genre" which segregates them from their male peers and labels them as an exception to the rule.

Thankfully, the death bell may finally be tolling for the outdated idea that 'female-fronted metal’ is a genre and progress to change perception is steadily being made.

In the past year alone, Lacuna Coil, Within Temptation, and Evanescence have all charted multiple times in the Official Rock and Metal Albums Top 40. Kobra and the Lotus became the first ever ‘female fronted’ band to score a nomination for Metal/Hard Music Album of the Year at this year’s Juno Awards.

Witches Hex Fest (“Heavy metal fest featuring only true female-fronted bands. From old glories to newer assaults!”) launched in the US, adding yet another all-female metal festival to the steadily growing list.

After being notably underrepresented in festival line ups for decades, increasing numbers of women are managing to claw their way into premium slots at some of Europe’s most notorious metal festivals.

A diverse range of bands like Halestorm, Asagraum, Venom Prison, Cellar Darling and Burning Witches diluted the testosterone on many festival bills in 2019 (although there’s still a long, long way to go where many festivals are concerned) including at major league fests such as Graspop and Download.

The evidence is plain — women are a firm fixture in the metal scene, whether on the stage or in front of it. They’ve been melting faces off since Warlock and Girlschool back in the 80s, albeit, significantly outnumbered by their male counterparts. So, as we move into 2020, why are women still being sectioned-off from other artists?

When you take a minute to consider what a genre actually is, you can immediately see why imminent death is fully deserved. A genre is supposed to tell us something about the style of metal we’re listening to. The characteristics which differentiate it from its musical siblings.

Thrash metal is vastly different from symphonic metal. Black metal sounds nothing like nu-metal. With that in mind, is ‘female fronted’ actually effective as a genre? Hell. No.

When you try to use gender to determine a band’s genre, you’re lumping Kittie in with Babymetal, Arch Enemy in with Windhand and Nightwish in with Svalbard. All these bands are female-led metal and none of them sound remotely similar. The only thing ‘female fronted’ helps you determine is the gender of the artists.

Although there’s an argument to be made for the uniqueness of female vocals, this doesn’t necessarily suggest the sound will be softer — especially not when you consider artists like Angela Gossow and Sabina Classen.

As a fandom, we’re smart enough to know that ‘female-fronted metal’ doesn’t just include the operatic stylings of symphonic metal — women can be found in all metal genres, performing all vocal styles.

The segregation of gender through genre is even more redundant when you examine modern attitudes to women in music. Perspectives are changing, and embracing females and femaleness within music is now relatively commonplace.

Solo artists like Myrkur, A.A. Williams, Chelsea Wolfe, and Emma Ruth Rundle are being openly accepted by metal fans, even though they don’t necessarily fit the metal archetype. The more ‘woke’ we become toward inequality within our society, the more uncomfortable these sexist labels start to feel.

There’s little argument to be made for female vocalists being talentless sex objects used to attract a predominantly male fandom, either. Women have consistently proven their ability to rival the talent of any male contemporary — Doro Pesch, Joan Jett and Kate De Lombaert all have proven skill, marketability, and long-term staying power.

Looking ahead to the next decade, the upward trajectory continues for women in metal. Babymetal have secured one of the top billings for Download 2020 and will be joining Amaranthe and Baroness for slots at Rock Am Ring.

Girlschool are heading back on a UK tour and Doro is due to start a European tour in March. Arch Enemy are planning to start writing a new album and we can expect new material from Burning Witches and Delain in the first few months of 2020. And that’s just the tip of the metal iceberg.

With all this in mind, it makes sense to kill this outdated, sexist gender divide and move forward into the next decade as one united metal fandom. Let’s face it, this genre was never a genre to begin with; it was a handy way for people to pick out the women in a male-dominated scene. It’s not a rare novelty to see a woman holding a guitar or death growling into a microphone nowadays — it’s pretty damn commonplace.

All things considered, it’s high time we put this thing to death. I’ll get my hatchet…