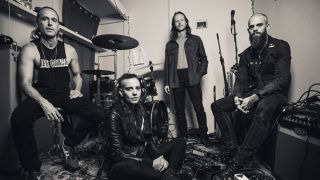 Baroness have released a video for their new single Seasons.

It’s the second track taken from their upcoming album Gold & Grey, which is set to arrive on June 14 via Abraxan Hymns and follows Borderlines which debuted last month.

The new video was shot as the band recorded the album in guitarist John Baizley’s basement studio in Philadelphia, and shows behind-the-scenes footage from the album sessions.

Speaking about the follow-up to 2015’s Purple, Baizley says: “The term I kept using was that I wanted to create something that was more kaleidoscopic than our former records.

“We were trying to say something new with our instruments, with our sound intact, with the spirit of the band intact, but not applying the typical conventions when possible.”

Speaking previously, Baizley praised his bandmates for sparking his creativity on the record, saying: “I consider myself incredibly fortunate to know drummer Sebastian Thomson, bassist Nick Jost and guitarist Gina Gleason as both my bandmates and my friends. They have pushed me to become a better songwriter, musician and vocalist.

The band are currently wrapping up their co-headline shows with Deafheaven and Baroness will head out on tour across the US and South America this summer.