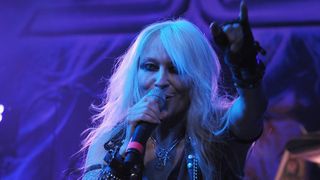 From the moment she first came to everyone’s attention on the debut Warlock album Burning The Witches in 1984, Doro Pesch has carved out a reputation as one of metal’s most distinctive and powerful vocalists. As she releases her new DVD, Strong And Proud – 30 Years Of Rock And Metal, which we’re exclusively previewing below, we take a look back at the Metal Queen’s storied career.

Looking back, what impact do you think Warlock had on metal?

“We were the link between the traditional German metal bands like the Scorpions and Accept, and the younger, thrash bands such as Kreator. I think the fact we got international attention helped to get the German scene noticed. We also attracted a very young audience, much younger than Scorpions or Accept. So, this helped to establish metal in Germany.”

Do you believe you outgrew that band?

“Oh no. That was never what happened. In fact, I never wanted to be solo. What happened was that, while we were making the Force Majeure album in 1989, we found out that our manager at the time had stolen the band name. We just couldn’t use it anywhere. And it was felt that calling ourselves Doro was sensible, because it might mean something to the fans. That was the only reason. I didn’t ever think about a career away from Warlock.”

How much of a problem was it to suddenly be a solo performer as compared to being in a band?

“I was used to pressure. As a female singer, I had always gotten a lot of attention from the media. So that didn’t alter. I suppose now I had to make decisions. But I have always followed my heart. Yes, I have made mistakes, but they’ve been done for what I thought were the right reasons.”

Why did you decide to work with Gene Simmons as producer on your Doro album in 1990?

“I grew up as a huge Kiss fan. When they played at the Monsters Of Rock festival in Germany (1988), I was asked if I’d like to introduce them. That was such a thrill. Beforehand, I met the band backstage, and they were marvellous. I even heard Gene Simmons singing All We Are, which he told me he liked a lot. A little while later I met him at a hotel in New York, and that’s when Gene said he’d like to work with me. He was amazing, and I learnt so much from him. The only problem was that he’s such a hero for me that I found it tough to sing in front of him in the studio. Eventually, he had to leave the room; I was so intimidated!”

In 1991, you went in a very different direction with True At Heart: why?

“This was the first time when I was confident enough to branch out and try different musical styles. Metal was seemingly dying, and I wanted to move forward. You see, I never want to repeat myself anyway, so I had the opportunity to work with so many wonderful musicians on these sessions. People who didn’t know anything about metal. But they gave me the chance to experiment.”

How do you look back on the two mainstream rock albums you recorded with producer/songwriter Jack Ponti in the mid ‘90s?

“I had a great time with Jack. We got on so well. He called me up when I was recording True At Heart in Nashville, and said he would love to work with me. And when I found out he’d co-written Love’s A Loaded Gun with Alice Cooper, that clinched it for me. That’s one of my favourite songs. So, I flew over to New Jersey and we hit it off straight away. Jack is super-talented. Like me, he’s small, but takes no shit from anyone. If he didn’t agree with something the label suggested, then he would tell them to fuck off. I love what we did.”

Your 1994 album Machine II Machine featured a lot of electronic effects. Were you guilty of taking onboard too many outside influences?

“No, that was very much my idea. We had virtually finished recording the album when I said to Jack Ponti that I wanted to do something different. I was keen to bring in drum ‘n’ bass. So, we scrapped everything and started again. I was really keen to experiment and I love the way it came out. I loved the freedom I had to do this sort of thing. And that album laid the foundations for Love Me In Black (1998), which is one of my favourite albums.”

In 2000, Calling The Wild brought you back to metal. What prompted this return?

“I always do what I feel is right at the time. Metal was coming back in a small way, and this inspired me to go in a more traditional metal direction. I also did a tour then in America with Dio, which was incredible. People kept telling me this would fail and I’d lose a fortune. But it sold out everywhere and proved I was right to stick to my beliefs.”

You starred in the movie Anuk – De Weg Des Kriegers in 2006. Do you wish you’d done more acting?

“Actually, there’s a second Anuk film finished and ready to come out. That should be released later this year. But yes, I would love to do more of this. If a movie is low budget – or no budget – independent, and has an outlaw spirit, then I would love to do it.”

You’ve duetted with so many vocalists. Which ones stand out for you?

“I’ve loved doing them all. It’s been wonderful to have the chance to work with Pete Steele, Udo Dirkschneider… every one of them. But if I had to choose anyone above the others, then it would have to be Ronnie Dio and Lemmy. They were heroes of mine, and it was such an honour to work with them. Ronnie once told me he loved my version of Egypt (The Chains Are On)… to have his blessing on what I’d done was thrilling!”

You are known as the Metal Queen. Does that give you extra pressure?

“Not at all. As far as I’m concerned anything people say about you which is positive is something to cherish. I never think of myself in that way, though. I am a metalhead today as I was in the ‘80s. I am a fan of the music and the people on the scene. To me, my fans are the best in the world.

What ambitions do you have left?

“I want to go on recording songs which give everyone a positive message. We live in such an uncertain world, where you have armed security at festivals that I feel it’s important my lyrics don’t dwell on violence, but give fans a reason to smile and believe things will get better. Right now, I am writing an anthem for a big martial arts tournament happening next April. I am a huge fan of martial arts, and to get the opportunity to do something like this is very exciting. And I am still passionate enough about music to believe my best album has yet to be recorded.”

Now check out this exclusive sampler of Doro’s new DVD/Blu-Ray Strong and Proud - 30 Years of Rock and Metal, which is out now on Nuclear Blast. You can purchase it here.

The first clip is taken from the Behind The Curtain, Inside The Heart Of Doro documentary packaged with the DVD, the live versions of Raise Your Fist In The Air and Burning The Witches are taken from the singer’s 30th anniversary show at Wacken festival, and the final clip is a version of Saxon’s Denim And Leather, featuring a guest spot from Biff Byford.