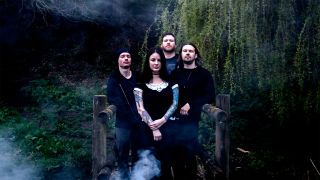 Those staring down their 30s probably discovered metal through the likes of Linkin Park, followed by a gradual introduction to Metallica, maybe dipping a toe into extreme metal, and then – BLAMMO! – a decade has passed and they’re a fully paid-up member of the Manowar fan club. Svalbard vocalist Serena Cherry bypassed this route and was listening to Morbid Angel by age 13.

The self-described music obsessive was so invested in Slipknot, her Hotmail address was based on their name, and after reading a magazine feature describing each member’s influences, the young, impressionable Bristolian was sent on a crash course through NY thrashers Nuclear Assault and Mike Patton’s quirky Mr. Bungle. She was also lucky enough to have a super-cool record collector mum (who has one of the highest scores on BBC Radio 2 music quiz PopMaster), who took Serena to see some of the hottest bands of the early 00s.

“One of my first experiences was seeing Kittie [in London, 2002], and I gave Morgan [Lander], the singer, a glow-in-the-dark bracelet. She wore it for the whole set and that was a really inspirational moment,” Serena says today, remembering her mosh-filled childhood while sitting in her band’s rented van outside the Black Heart venue in London.

“There was something about Amen’s shows that was so aggressive and liberating,” she continues. “I remember thinking, ‘What must it feel like to be on the other side? Being that person screaming and throwing themselves around.’ Obviously you do it in your bedroom to Otep when nobody’s looking! Ha ha ha! From then, I just wanted to form a band and see what performing was like.”

However, performing live wasn’t the first item on Serena’s agenda. As an evolution from the theatrical, image-based world of nu metal, she became fully involved in the monochrome, frostbitten wasteland of extreme music. Originally finding solace in Dimmu Borgir and Satyricon, the singer was drawn to the one-man-band approach of black metal.

“It was just me and my four-track and my drum machine for quite a few years,” Serena says, admitting she used to be socially awkward. “I was a massive loner as a teenager. Before I discovered metal, I was always a little bit of an outsider, and then when I got into metal it pushed me even further to a more reclusive way of thinking and being.”

Eventually, though, the desire to perform live with a full band was too strong, and through sheer determination, Serena made her dream a reality. Working a Saturday job in a guitar shop, she used her wages to hire a drummer in order to play her first show supporting extreme Japanese doom merchants Gallhammer, followed by a tour with US psychedelic metallers Nachtmystium. Despite releasing three albums, Serena refuses to tell us the band’s name, laughing that she finds the photos cringey.

But when Serena was 18, an incident at Wacken tarnished her love for heavy metal and she turned her back on the subculture. “I was watching Obituary and a group of guys surrounded me, forcibly grabbing my breasts and trying to shove their hands between my legs,” she says, her voice dripping with disdain. “No one tried to stop them, and they were a lot bigger than me, and I just felt terrified and overpowered; it seemed like there was nothing I could do. I looked around and couldn’t see a single girl, and I felt really vulnerable, threatened and uncomfortable. I managed to punch one of them and get free, then they kicked mud in my face. I didn’t tell anyone what happened, I just came home and sold all my metal shirts. I didn’t want to look like a metalhead anymore.”

Yet Serena continued to create music. Leaving her metal guise behind, she formed a “really indulgent” solo project that involved a loop machine and singing songs about cats. While supporting a prog band in Bath, she noticed the band’s driver was wearing a Dying Fetus shirt, and the pair struck up a conversation about the post-rock elements in Serena’s music. This man was Liam Phelan, who would become Svalbard’s guitarist. They poached drummer Mark Lilley from another band and, after going through “exactly a million different bass players”, Svalbard’s line-up was finalised by Adam Parrish.

Sitting with Serena in the front of her band’s van, she’s all smiles and laughs continuously, often going off on a tangent. At times muddling her words, confessing she finds it easier to type than talk, the shy, nervous teenage version of herself hasn’t fully faded – she even whispers that her favourite band are Nightwish, like it’s something to be ashamed of. But one thing that shines through is her passion for heavy music.

In 2015, Svalbard released their frenetic, blackened debut album, One Day All This Will End, earning them a seven out of 10 score in these very pages. But things soon went awry. After a seven-year relationship, Liam and Serena broke up, putting a strain on the band. Then, both of them were stricken with severe health problems. Liam had a bulging slipped disc, meaning he could barely stand, and Serena caught a parasitic bug from a drinking fountain in America. “It ate all my organs. Now I’m permanently scarred on the inside and can’t eat properly any more,” she says dejectedly. “We played 2000Trees [last year] and I collapsed onstage.”

Serena took a break from performing live, with another vocalist and guitarist filling in on tour, leaving her wondering if they’d want her back. They did. Today, she speaks honestly about the sacrifices they all endure to make this band work; all of them maintain dead-end jobs and struggle financially, and Serena missed out on the birth of her niece because she was playing to 20 people in Sweden. “You get to points in life where you question how many sacrifices you’re making, but I feel like we persevered and we got through it; the going got tough and it made us stronger as a unit,” she says.

The result of this newfound strength is Svalbard’s new album, It’s Hard To Have Hope. A blistering, apocalyptic monster of black metal, post-rock and hardcore, baring razor-sharp teeth and a venomous tongue. Refusing to tiptoe around difficult subjects, Serena screams with brutal sincerity and passion about topics that affect human beings everywhere.

Drawing from her own experiences of sexual assault at Wacken, How Do We Stop It? is a raw, autobiographical display of aggression and anguish. Pro-Life? points the finger at religious groups for treating a woman’s life as less than that of an unborn child (Serena herself was raised Catholic until aged 12). Revenge Porn deals with the idea of victim-blaming and the shame that comes with having your trust broken. Feminazi?! sticks the middle finger up to those who compare people looking for equal rights to some of the worst people in history, inspired by a YouTube comment left on the band’s song Expect Equal Respect. And on it goes, all without metaphor or nuance, as blatant as a punch in the neck.

Taking influence from The Times columnist Caitlin Moran’s direct, no-fucks-given writing style, and finding the confidence to be more forthright in her own words after writing the lyrics to Expect Equal Respect, Serena has realised she doesn’t have to hide under a safety blanket. She can say precisely what she means, without resorting to fantasy metaphors found elsewhere in metal.

“Sometimes it’s so unobvious that bands are singing about politics or might have a song about animal rights, because it just sounds like generic metal lingo about darkness,” she sighs, contemplating the metal scene at large. “It’s really easy to get shrouded in the metal tropes, and I wanted to deliberately push away from that and be as plain and unpoetic as possible.”

Despite metal originally being the refuge of the outcasts and the forward-thinkers, this radical approach to songwriting hasn’t always been well-received by the wider community. “If you look at metal from an objective point of view, it very much is white men getting angry about stuff. Every metaller loves the classics, they have a real concern for the history of the genre and the traditions of metal, and that’s one of the things that’s restricted it as a genre for so long. When you bring in leftist politics to that mix, it can get people’s backs up, because despite that being a thing for a very long time – you read some thrash bands’ lyrics from the 80s and it’s really left-wing – people don’t like it shoved down their throats.”

Serena laughs that her favourite insult right now is Social Justice Warrior, although she prefers to be called a Social Justice Worrier, as she’s very concerned about the issues her band cover. Regardless of the backlash, she’s keen to expand her reach, especially when it comes to those outside the metal community.

“I personally would like our message to reach more feminist movements,” asserts Serena, eyeing up the potential. “At the moment we’re a band within metal that are singing about feminist topics; I would like for feminists outside of metal to know who Svalbard are, what our message is about and what we’re doing. I want the spheres to overlap – the Venn diagram of feminism and metal to push forward with Svalbard in the middle.”

Svalbard's latest album It's Hard To Have Hope is out now