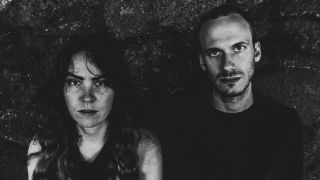 So being a self-proclaimed metalhead herself, she recently took a hike with friend, ALN – the brain behind Portland-based one-man black metal outfit, Mizmor –  to discuss his new album, Cairn, religion, and more, and gave Metal Hammer exclusive access to their incredible conversation.

Stream Mizmor's fantastic new album Cairn (out via Gilead Media on Sept 6) in full on page three, and enjoy being privy to a deeply personal conversation between two incredible modern artists.

A.L.N.: Cairn is about the absurdity of life, simply put. It took me a while to articulate my thoughts and get this idea unified and out of me because I don’t really seek to write music for the sake of writing music; I wait until there’s an aching in me and something brewing, rattling around that needs release.

And so that kinda started to happen but it took me awhile to figure out what I wanted to say because I’ve spent the past seven years talking about how I’ve lost my faith and I don’t really care to talk about that specifically anymore, like that’s kinda old news, so I definitely felt that I had something new to say; not entirely new like I’d gained faith or anything, something that is related to losing faith, but is more than that. So I was really struggling to figure out how to say what I wanted to say.

The last thing I released was called This Unabating Wakefulness and that is about insomnia; and everything I write usually has a personal, individual significance and also a larger lens, like mankind, sort of application.

So it was about insomnia but it was also about anxiety and it was also about just waking life - being alive and feeling like it’s lasting forever and like it’s so hard to be around. So there was already this idea that I was working on that is, ‘what is this being around?

What is this being alive that I’m choosing to do when there’s no ultimate purpose to it, as I’ve decided.’ So with Cairn I sought to solidify that. I read this book called “Myth of Sisyphus” by Albert Camus and it took the words out of my mouth. I read it in a day or two.

I was practically in shock; he was saying everything that I felt. And that book is about absurdity. The idea is that the life we live is already an absurd premise: that mankind continually seeks meaning, that is the human condition, in a world that is inherently devoid of ultimate meaning, and that creates this cognitive dissonance that is completely absurd. Either one of those things on their own is not absurd but a world where both of those are the guiding laws in which all other things take place is completely absurd.

E.R.R.: Can you reiterate what those guiding laws are?

A.L.N.: Yeah, the premise is that mankind is constantly searching for meaning, that is Tenet A so to speak; Tenet B being there is no ultimate meaning. And then you press play.

So that’s completely absurd, and I feel like I can feel that in waking life constantly like, ‘this whole thing’s just absurd, man,’ you know? Sometimes you have situations that are overtly, almost comically, absurd and you can see it very specifically, like in absurdist comedy.

But just the whole premise of life anyway, without being funny, is completely absurd. And Camus says there are three responses that an individual can have to that, and that is a leap of faith into meaning, into ultimate purpose, meaning you believe in god, like, ‘ok I have an answer to this. I reject it, there is ultimate meaning, I believe in that.’

A leap of faith out of my circumstances into a new one that has been created. The other thing you can do is end your life because you’ve decided that life is no longer worth living if there’s not an ultimate meaning to it. There’s just worthlessness and it is futile and pointless and you don’t want to be around.

A.L.N.: Yeah, and that is the third option - you accept the circumstances for what they are and you live in the absurd every single day. You define your own meaning, if you need meaning, and we all do.

You figure out why, what is it for you that keeps you around, and then you live your life and you try to enjoy it. And it’s a lot easier said than done, but that is the answer.

Like, you didn’t ask to be here, it’s an insane set of unlikely circumstances that led to your being here, but you are here and the other two options don’t really solve the premise, the problem, the conundrum, they just escape it. And I think the best thing for any person is to live a life of meaning and enjoyment.

E.R.R.: But not meaning, not an applied meaning in something that is inherently false like religion, is what you’re saying? Because I think some of your lyrics say that your knowledge is empirical. Meaning that it’s scientific almost.

E.R.R.: I was gonna say, ‘how is this record different?’ But Mizmor has been a project for, how many years?

E.R.R.: And it’s always been about, to some degree, losing your faith?

A.L.N.: Yeah and that’s evolved a little bit. The first album… I was still a Christian when I made that album. All those songs are really prayers. They’re addressed to God. It’s a questioning, more than it is like a, ‘I don’t believe in god.’

It’s more of a, ‘why are you doing this to me,’ thing, you know? Which is where the name came from. It’s very indicative of the psalms, wrestling with God. Then after that there was a series of splits and an EP from 2013-2015 and those explore a little bit more.

All the songs were numbered at first; the first album goes through song four; then songs five and six are a different thing. And song five, in the Hebrew I can’t pronounce it, but the English translation means “desolate.” Song six means “to walk.”

And so song five was just kind of describing what the landscape of my mind looks like now that God is not a part of it, but it was still very confused and sad about the whole thing.

Song six gets a little bit more hopeful where it’s actually about turning and walking away from the idea of god instead of sitting there mourning it still.

E.R.R.: So that’s the point at which you became divested of faith?

A.L.N.: Yeah, at the point I would still call myself agnostic but would no longer flirt with the idea of saying, ‘I was a Christian, I’m kind of struggling with that.’ It was more like, ‘I’m not a Christian; I’m not an atheist but I know I’m not a Christian.’

Songs seven, eight, and nine explore different things that I was learning. Song seven is very much like the Proverbs to me.

The Proverbs contain all these different statements of wisdom but within the book you have two different proverbs that totally contradict each other. So they weren’t these maxims that were always true, they were more like, ‘this is what happens sometimes.’

So song seven was exploring epistemology, what can be known, and the epistemological rupture that happened in my mind when I had this paradigm shift of what I feel I do know, and how I really don’t know anything anymore. It’s full of little proverbial things like that.

Song eight is another recapture of losing faith, wrestling with the idea of death. Song nine is called Crestfallen Usurper and that song is about taking the throne. God’s been dethroned and now I’ve taken the throne, is my new worldview, not that I’m god or anything but…

A.L.N.: There’s no god anymore, I’m the driver. But the idea is that I’m really disappointed with what reality really is. I’m king now but under grave circumstances.

E.R.R.: So 'Cairn to Suicide' - tell me what that’s about. I also wanna ask more about what the cairn represents and then maybe you can elaborate more on what that means specifically to god and to suicide.

A.L.N.: Ultimately for me, it may not be so tangible a thought in certain moments, but my impression is that suicide is an escape and it is the most ultimately selfish act that one can commit. But sometimes that’s not enough to keep an individual going, you know?

For me that is a huge part of it, a huge part of it. The other part of it… it’s weird, it’s really basic but, on the other side of the coin of feeling dread in every moment of life, which is certainly usually present for me, there’s also amazement.

Like the experience of life is equally beautiful as it is painful. In the past I’ve struggled with this being a good reason for my own life, but simply the inertia of my existence, and I don’t mean inertia like stagnation, I just mean like…