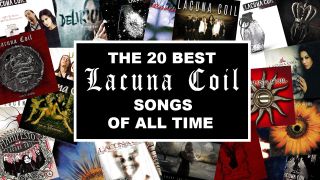 Lacuna Coil’s enticing hybrid of goth, groove and alternative has served them well over the years, thrusting the Milan-based outfit towards the upper echelons of modern metal making them one of Italy’s biggest musical acts to date.

In a recent and very exciting co-announcement with Century Media, Metal Hammer revealed that Lacuna Coil would be back in Blighty on September 6 in order to visit the London Dungeon and give fans the experience of a lifetime.

Unsurprisingly, the chance to walk around the exhibit with the band themselves, attend a Q&A session and sit in on an exclusive playback of upcoming ninth studio album Black Anima saw the event sell-out in a matter of minutes.

If you were one of the fans lucky enough to blag a ticket, Hammer hopes you have an amazing time. If not, there is no need for despair. The Italians will be revisiting our fair shores as part of their UK and European tour with Eluveitie throughout November and December.

We also gave you the opportunity to make your voice heard by helping us compile a list of the band’s finest songs from across two decades. Votes were cast and we can finally reveal the ultimate Lacuna Coil Top 20. Huzzah! (Disclaimer: you picked these so please don’t come at us).

Taken from the Italians’ self-titled debut EP, there’s a beautiful simplicity at the bleeding heart of this acoustic slow burner.

Chockful of atmosphere and introspective lyrics, the riffs step aside for ethereal melodies as Cristina’s soaring vocal takes centre stage on one of the band’s earliest (and hugely underrated) hair-raising tracks.

Giving the listener more bounce for their proverbial buck, this bass-laden banger was the third single to be released from 2006’s Karmacode.

With its mainstream radio-friendly polish, Closer’s sheer danceability offered up a noticeable contrast soundwise to make this the album’s undisputed wildcard.

Admittedly, it’s a bit like sonic Marmite – you’ll either love it and want to bop continuously or you’ll hate it and skip to the next track.

Translated into English as “without end”, there are two - although the differences are subtle - versions of this native tongue-twister within the LC discography.

Balancing sumptuous goth-tinged melodies with scathing vitriol, Scabbia and co-vocalist Andrea Ferro are on irresistible form on this exotic skin-tingler.

You’ll be reaching for that Italian phrasebook in the blink of an eye – or just singing along in your best accent.

Its earworm chorus will lodge itself firmly in your cranium and have you constantly hitting the repeat button.

The first of five songs on this Top 20 to be selected from 2002 opus Comalies. A music box-type intro evokes a sense of mystery and ambience before that riff-fuelled cacophony kicks in.

Ferro has the lion’s share of vocal duties on this track; his soaring rasps accompanied by bursts of haunting synth.

A remix of the original ballad from Lacuna’s 1998 EP. The mystical ambience remains but those added guitar riffs that will sate heavier appetites.

Atmospheric and wonderfully dark, Cristina’s vocal performance is as transfixing as ever. It’s arguably one of the best tracks to feature on debut full-length In A Reverie.

Overflowing with synths and heartfelt emotion, the titular track closes album number three and is sung in both Italian and English during its chorus.

Frequently lost in the shadows of Senzafine when it comes to discussions over what the number one all-Italian sung track in the Lacuna catalogue actually is the people appear to have finally spoken.

Lulling you into a false sense of security via a trademark LC-esque synth-drenched intro, all bets are off as piledriving riffs and a cascade of skull-rattling drums pummel you into immediate submission.

Inspired by real-life tales of a US sanatorium, tormented roars are deliciously juxtaposed by skyscraping melody lines on the opening track from 2016’s darkly cinematic Delirium.

It may be something of a heavy rock ballad, but there’s a direct and confrontational message at the core of this impassioned offering from 2014 release Broken Crown Halo.

Soul stirring or soul-searcher? We’ll let you decide on that one. A must for fans of emotive slow-burners underpinned by a darkened rock n roll twist.

Tight Rope was the epitome of Comalies’ goth-tinged grandeur and a mesmerising blend of the haunting and fucking heavy.

Double-kick flourishes courtesy of the rhythm section provide that accentuation in all the right places whilst Cristina’s vocal soars effortlessly during the track’s scathing chorus.

All together now: “SELF-DESTRUCT SEQUENCE ACTIVATED”.