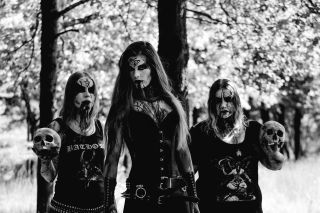 As much as black metal has always thrived on the tensions between its progressive and old-school wings, bands such Mgła, Misþyrming and Svartdauði have made it clear that there’s still a bottomless, potent pit to be mined within the scene’s recognised sonic boundaries.

The Netherlands-based Asagraum are another name to be added to new wave of black metal forerunners. With their reputation growing by word of mouth, on the basis of both their 2017 debut album, Potestas Magicum Diaboli, and their mesmerising live shows such as the set at last year’s Incineration Festival, the two-piece (expanding to three members live), are undoubtedly about to hit critical mass with the imminent release of the stunning follow-up opus, Dawn Of Infinite Fire, due out via Edged Circle Productions on September 13.

Although the album has musical roots in the ferocious, barbed sound of Norway’s second wave, its nine tracks summon up a new set of incendiary maelstroms at the pressure point where ancient power and adrenaline-spiking immediacy meet. It’s all bound by an unwavering conviction and a supernaturally charged momentum that whips up all around it to a fearsomely transcendent pitch.

We’re beyond proud to offer an exclusive preview in the sense-rattling form of Dawn Of Infinite Fire’s opening track, They Crawl From The Broken Circle.

Royally rodgered by pulverising blastbeats as soon as its eerie, 10-second intro is done, it proceeds with all the force of a marauding wright army through blighted yet otherworldly environments, with galvanising grooves ultimately wrought from the most unstable of elements and frontwoman Obscura’s voracious, vision-wracked rasp.

If you want to experience what black metal’s state of the art feels like in 2019, put down your Maltesers, tune yourself to the suprahuman realms and enter the slipstream of They Crawl From The Broken Circle this very instant!

Asagraum's album launch party is at The Macbeth Of Hoxton on October 26. Go to the events page here