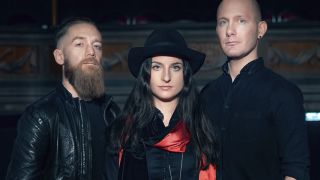 Cellar Darling have released an animated lyric video for their new single Burn.

It’s the latest track taken from the band’s second album The Spell, which launched in March this year through Nuclear Blast. It follows a promo for Insomnia, which won Video Of The Year at this year’s Progressive Music Awards.

Cellar Darling say: “Just in time for the holiday season and to counteract the cold, we present you with Burn, yet another animated video from our concept album The Spell, and once again created by Costin Chioreanu.

“This is the ninth video in our ongoing series, in which every one of the 13 album tracks will receive a visual interpretation by Costin. We hope you enjoy it!"

The remaining videos to complete the full set will be released in due course.

Cellar Darling will head out on the road from April across Europe.

Cellar Darling: The Spell
Swiss outfit Cellar Darling released their second album The Spell back in March this year through Nuclear Blast. The trio have collaborated with illustrator Costin Chioreanu for videos for every track on the record.View Deal