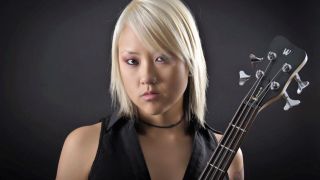 Kittie bassist Trish Doan has died at the age of 31.

The news was confirmed by the band on their Facebook page.

They say in a statement: “It is with immeasurable sadness that we share news of the passing of our sister and best friend Trish Doan.

“Finding the right words is tough. She was so bright and vibrant and talented and we loved her and still do. She was so much more than just a musician or member of the band. She was our blood, our sister and family.

“Finding our way without her will be challenging, like a ship without a lighthouse, and we are devastated. We ask that you please respect our privacy and her family’s privacy during this difficult time.”

Doan joined Kittie in 2005 and left in 2007 following the release of the band’s fourth album Funeral For Yesterday. She retuned to the fold in 2012.

The band’s former bassist Ivy Vujic Jenkins, who played on Kittie’s 2009 album In The Black and 2011’s I’ve Failed You also paid tribute to Doan.

She says: “Anyone who has ever met Trish Doan knows that she was one of the sweetest, kindest, most down to earth people on this planet.

“I loved seeing her beautiful photos of Australian sunsets and city skylines, and nerding out about bass gear and geeky tech stuff.

“Everyone loved Trish more than she ever realised. She has left an imprint on so many lives. Her memory and legacy will outlive her physical form for many years to come.”

No cause of death has been announced.